Welcome to my stop on the Virtual Book Tour, presented by Goddess Fish Promotions, for His Montana Rescue by Vella Munn.  Please leave a comment or question for Vella to let her know you stopped by.  You may enter her tour wide giveaway by filling out the Rafflecopter form below.  You may follow all of the stops on the tour by clicking on the banner above, the more stops you visit, the better your chances of winning.  Good Luck!

Behind His Montana Rescue
By Vella Munn

A five book series! Even though I wrote each story in the Montana Lakeside series, I still have a hard time believing what I’ve done. For most of my writing career, I’ve been happy writing stand alone stories, but that was before a girlfriend and I were enjoying some down time in a small mountain town after a writers’ conference. The conference had been wonderful but exhausting, and our brains were worn out. We were looking forward to a little quiet and for her to treat me to a taste of the Rocky Mountains. We’d settled into our rustic cabin and had stepped onto the deck overlooking a creek with glasses of wine in hand. I don’t remember what we were talking about, probably not much because like I’d said, our minds needed some serious R&R.

A storm started moving in complete with blue/black clouds and a harsh wind. Instead of retreating indoors, we wrapped our coats around us and turned our faces into the wind. At least I did. (A part of me wants to insist my friend thought I’d lost my mind).

I’m a wilderness gal, born and raised in mountains with the wilderness in my DNA. I’d spent the last five days in a Denver hotel surrounded by people. This afternoon was my reward for acting like the extravert I’m not and an unexpected gift from the nature gods. As I sipped on my wine, my mind went to thoughts of how much nature means to me. How it defines me. How deeply I need it.

Suddenly I was wide awake. I had a goal, a fictional one. I wanted to explore my mindset through my writing, wanted to introduce readers to what nature offers in the way of healing.

In a matter of minutes, a glass of wine, a receptive listener, and rain now pelting my face I knew what I was going to do—write a romantic fiction series with each book taking place in a different season. I’d also write a novella that takes place in a single day but carries the same message.

His Montana Rescue is the summer story. I had no trouble deciding on Echo Rose’s career and back story. My family owns a cabin in southern Oregon’s mountains within an hour’s drive of Crater Lake. Summer means long days spend outdoors and constant awareness of fire conditions. Echo is a forest ranger. The year before her story begins, she was nearly killed while fighting an out-of-control forest fire. She has scars and PTSD from the experience. Hero Ray Bowen is at the Lake Serene resort to oversee restoration and to do everything he can to repair his reputation and put his life back together following a betrayal that cost him his business.

So there you have it. Two scarred people in a remote setting trapped by their pasts but fighting to embrace the present and look forward to the future. Needing love. 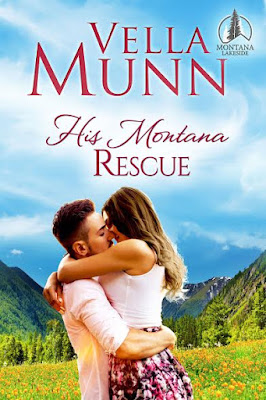 Former firefighter Echo Rose may have recovered from the injuries that nearly ended her life but the emotional scars still linger. She now devotes herself to protecting wildlife and sheltering her heart until local contractor Rey Bowen reminds Echo that life can offer so much more.

Rey Bowen is not the only one at Lake Serene with secrets and a desire to reboot his seriously derailed life. Meeting Echo reminds him that life can sparkle with joy and laughter and passion, but can he show the cautious Echo how to love again even as he struggles to trust his own heart?

“I’m under pressures you’ll never understand,” he said so softly she had to strain to hear. “Pressure that goes much deeper than being able to bring in roofing trusses.”

Both fascinated by what he hadn't said and determined not to go beneath the surface with the big, distant man, she started back toward her vehicle.

“We all do what we have to,” she said over her shoulder. “Priorities that drive us. I’ll leave a printout with you so you know exactly what you can and can’t do until the restrictions are lifted.”

“Who made up those rules?”

She was tempted to counter that the rules hadn’t been fashioned out of thin air as he seemed to be indicating but that wouldn’t get them anywhere. For as long as Rey and she were at Lake Serene, they’d have to work together. She had no control over how he handled his side of the relationship, but she intended to be as professional as possible.

Easier said than done, because he’d joined her and was matching his stride to hers, his arm occasionally brushing hers. Touching her in ways she'd nearly forgotten were possible. Reminding her she was a woman.

She started to put distance between them but was distracted by what might be the chipmunk she’d seen earlier. Its life could depend on what she said today.

“Your employee can’t smoke outside,” she told Rey as they neared the cabin with the cigarette-smoking workman now standing in the doorway.

“That’s one of the regulations.”

He stopped, gave her no choice but to face him. “That goes without saying. I’m not an idiot.” 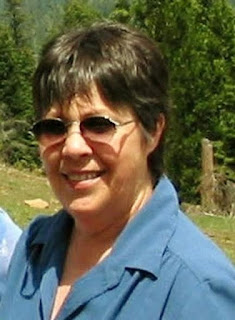 Vella Munn freely admits to being a dedicated and sometimes demented fiction writer. She has always been drawn to nature and those who feel at home in it. A career writer, she has had way over 60 books published, most of them romances both past and present. As far as personal statistics go, she has one husband, two sons, four grandchildren, and is owned by two rescue dogs. Home is southern Oregon within a two hour drive of Crater Lake. She frequently visits Montana in her mind and heart.

a Rafflecopter giveaway
Posted by Maria at Monday, November 28, 2016