Virtual Book Tour & #Giveaway for Behind the Bonehouse by Sally Wright

Welcome to my stop on the Virtual Book Tour, presented by Goddess Fish Promotions, for Behind the Bonehouse by Sally Wright.  Please leave a comment or question for Sally to let her know you stopped by.  You may enter her tour wide giveaway by filling out the Rafflecopter form below.  You may follow all of the stops on the tour by clicking on the banner above. The more stops you visit, the better your odds of winning. Good Luck!

How Writing the Ben Reese Series Set in WWII Prepared Me to Write a Mystery Series by Sally Wright.

I suspect that writing the Ben Reese series, based on a real life university-archivist-ex-WWII-Ranger, did prepare me in a couple of ways to write the Jo Grant horse country mysteries, though I hadn't stopped to think about it before.
I didn't know much of anything about World War II until I started the Ben Reese mysteries, after having become interested in a college archivist I'd met through mutual friends. I'd known a little about Bletchley Park working on the German Enigma code. I'd known that Churchill had nailed Hitler and his intentions early in the thirties, when Britain's Prime Minister, and most of his advisors, had had their heads well hidden in the sand.
But it was working with the archivist, a Renaissance man who was interested in everything, who could restore paintings and identify coins and ancient documents and do too many other things to mention here, that made me learn about WWII. I wanted to create a protagonist I could really care about, a man who could go different places too, and study all sorts of unusual artifacts because he was an archivist - a citizen soldier, and a man of intellect, who'd had to become a man of action to do what had to be done. It was working with John Reed, the archivist, who only talked about the war with his wife, who in trying to help me, started talking to me too, and led me to read about his war, year in and year out, as well as all sorts of archival materials.
It was doing an early Ben Reese book tour that took me to Lexington, to a collection of beautiful farms whose owners opened their doors as B&Bs when they felt the urge, that got me interested in Woodford County and placing a book there. I set the fifth Reese book, Watches Of The Night, there (as well as in Tuscany, and parts of Ohio), and knew while I was working on Watches that I wanted to come back and write another book about Kentucky's horse culture.
When I'd finished Code Of Silence, the prequel to the Ben Reese series, which has to do with the Soviet Venona Code, which was first documented by two American historians (one a Library of Congress historian) working in the KGB Archives in the window of time when they were open to the public. The NSA's Historian was eventually allowed to reveal the work we'd done in the thirties and forties on decoding that code, which the Soviets had used to communicate with their many agents in the US. I was helped by the Library of Congress historian, as well as the NSA's, and the process of researching that book was absolutely fascinating.
But. Once I'd finished Code, I began to study the OSS (the American intelligence organization that worked behind the lines in WWII, like the British SOE, with the French Resistance and other resistance groups in Europe and Asia). The more I read about the French Resistance and the OSS the more I wanted to write about both.
That took me to Lexington again, hoping to somehow connect all that with the stresses and strains and real opportunities found in family businesses (having been raised with one myself), this time in Kentucky's horse industry. I imagined a hands-on broodmare care business like the one our neighbors had had in Ohio before they moved to Versailles, Kentucky. And a horse van manufacturer, like the one I'd imagined for Watches Of The Night. And maybe an equine pharmaceutical company that was founded by a fictional vet-pathologist who helped with the research that was done during WWII to manufacture penicillin for the Allied troops.
I suddenly had characters, with backstories and sufferings, that tied them into the OSS, who were trying to adjust to life here after the war in Europe. Nearly twenty years have elapsed by the time the first Jo Grant takes place, and some who came back have done well, but some clearly haven't, and the need to help when the sufferers appear, drives the Breeding Ground plot.
Jo Grant is a woman architect (and partner with her uncle Toss in a hands-on broodmare care business), whose mother has died of a brain tumor, whose brother, who'd been in the OSS, has just had a motorcycle accident, and she's trying to pick up the pieces. She's helped by a friend of her brother's, who was with him in the OSS, and has moved to Woodford County to work for the equine pharmaceutical company as a chemical engineer.
Behind The Bonehouse, the new Jo Grant mystery, takes place in 1964 and '65 when the intellectual property at the pharmaceutical company leads to an untimely death that entangles Jo and her new husband in a nightmare of wrongful accusations and legal and physical danger, that working with the real WWII Ranger helped me imagine and describe. I'm a wimp. I don't do fisticuffs and murderous assault. He taught me through his experience behind enemy lines.
But writing a mystery - a Ben Reese or a Jo Grant - is much the same sort of process. Secrets from the past, diverting suspicion, building tension and anxiety - it's pretty much a knee jerk sort of thing that comes from both reading and writing mysteries and crime novels most of my life.
Still, one of the great opportunities in writing a mystery, is that inherent in its construction is immersion in the great concerns and emotions of being human. We have to probe the vicissitudes of life - loss, love, greed, death, jealousy, forgiveness, revenge, self-delusion - you're able to write about all that just as naturally as Tolstoy, or Austen, or Samuel Johnson, or even Shakespeare himself. Murder brings out the best and worst, much the way that war can. 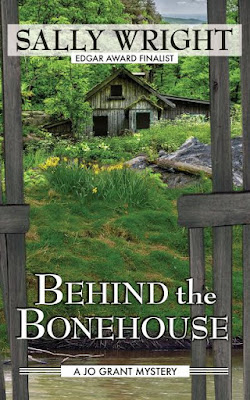 It wasn’t until thirty years after the attacks, and the lies, and the intricately orchestrated death, that Jo Grant Munro could bring herself to describe it all in Behind The Bonehouse. Her work as an architect, and the broodmare farm she ran with her uncle, and her husband Alan’s entire future - all hung by a thread in 1964 in the complex Thoroughbred culture of bluegrass Kentucky, where rumor and gossip and the nightly news can destroy a person overnight, just like anywhere else. It was hatred in a self-obsessed soul, fermenting in an equine lab, boiling over and burning what it touched, that drove Jo and Alan to the edge of desperation while they fought through what they faced.

When I was lying in the hospital three months or so ago, after the boys and their children had gone home, Alan came back and kissed my forehead, and said, “It’s time you wrote it down.” He handed me a spiral notebook. Which I set on the bedside table without saying a word.

I didn’t have to ask what he meant. Even after I’d finished writing Breeding Ground, when I wanted to tell a whole lot more of what we’ve watched here in horse country, this memory wasn’t one I could touch. And what you won’t look at festers, especially since I’d been putting off lancing it for a good many years with conscious intent.

Once I got home, and got stronger again, I got busy with every other part of my life. Till one night I dreamt about the river, and woke up sick and sweating, and it came to me, the way it always has, when I’ve made a decision in my subconscious mind, that the time had come to get it done.

It started thirty-two years ago, months before the wounding in the river, when the Woodford County Sheriff Alan and I saw as a friend stood right here on the family farm saying words that tore our lives asunder without looking us in the eye.

It’d grown out of something we’ve all had happen—lies getting told about you by someone with implacable intent. Malicious intent, in this case, because it was no misunderstanding. It was someone setting out to twist the truth toward his own perverse purpose. It was his word and deeds against ours, which has always been part of living in this world, and will be till the last of us gets over being human.

I’d just turned thirty-four when it happened, and I didn’t have the experience then to put it in perspective. I need to try now, while I still can, because the disease that’s started eating into me makes delay a kind of denial. 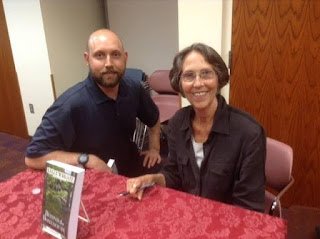 Breeding Ground, Wright’s most recent novel, is the first in her new Jo Grant mystery series, which has to do with the horse industry in Lexington, Kentucky. Wright is now finishing the second Jo Grant novel.

Sally and her husband have two children, three young grandchildren, and a highly entertaining boxer dog, and live in the country in northwestern Ohio.

a Rafflecopter giveaway
Posted by Maria at Wednesday, November 16, 2016