Welcome to my stop on the Book Blast, presented by Goddess Fish Promotions, for Asmodeus: The Legend of Margret and the Dragon by Brooks Hansen.  Please leave a comment or question for Brooks to let him know you stopped by. You may enter his tour wide giveaway, where one (1) randomly drawn commenter will be awarded a $20 Amazon/BN GC, by filling out the Rafflecopter form below.  You  may follow all of the stops on the tour by clicking on the banner above.  The more stops you visit, the better your odds of winning.  Good Luck! 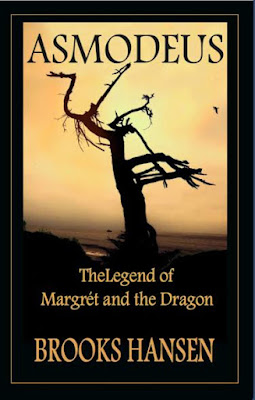 Asmodeus: The Legend of Margret and the Dragon
By Brooks Hansen

…Here again, his natural figure crouched beside her in the dank darkness of the cave, watching her in silence as she slept, struggling with cravings which were new to him, both tender and violent, and which he could only really compare to hunger… (from ASMODEUS)

On the cusp of the Great War, an even more pitched battle is waged in the furthest corner of the Nordic highlands, the final chapter of a centuries-old rivalry, pitting a troubled bloodline of thieves, journeyman, and politicians against the last and greatest dragon of the hemisphere, Asmodeus.

Until now, the source of this antagonism has been a single gemstone, the fabled shamir, whose history traces to the coffers of King Solomon. The present clash, however, has been sparked by the emergence of an even more desirable, more defiant, and more powerful force than that.

Inspired by the golden legend of St. Margaret, Brooks Hansen’s Asmodeus is a masterfully woven tapestry of history, myth, and fantasy, in the tradition of J.R.R.Tolkien, Bram Stoker, and C.S. Lewis. By turns a romance, an adventure, and the darkest imaginable Gothic, his tale is also, as seen through the eyes of the maiden Margrét, an unflinching exploration of our divided nature — what makes us beasts, what makes us human, and what makes us divine.

His golden eyes flicked open, blinked, and narrowed to a squint as he finally lifted up his great, horned head. He shrugged the veil of wings. He uncoiled from his most precious gem and lumbered upward, following the airborne trail up through the high tunnel to the opening just beside the cataract.

Only his muzzle appeared at first, shining like tar in the slanting sunlight, but even that merest of appearances stirred notice among the hovering hawks and vultures: Look. Be warned and wary. The master had awakened.

His head slid further out, taking in the day. The clouds had lifted. The sky was polished glass, but the familiar whisper was still there, coming from below. Down on the near shore of the inlet was a scuttled boat. Again his eyes narrowed, trying to figure from the tides just how long ago the wreck had occurred, and whether its victims were still on premise. He hoped not. Men had their place, but it wasn’t here.

…He crawled further out onto the ledge and extended his neck toward the curtain of water, which was fuller today than usual, gushing down from the mountains after all that rain. He helped himself to several gulps. He let the bracing cold beat on his head a while, then shook free with a glistening, majestic explosion, lifted his wings and leapt. He glided most of the way down, turning three wide circles in the crux of the fjord, his great spanned shadow dashing along the cliff-side, flicking across the cataract, then across the blue surface below, around and up and around again three times before finally re-meeting him, claw to claw, on the strand beside the boat...

BROOKS HANSEN is an author, screenwriter, essayist, and teacher. His novels – THE MONSTERS OF ST. HELENA, PERLMAN’S ORDEAL, THE CHESS GARDEN, and BOONE (co-authored with Nick Davis) were all New York Times Notable Books. THE CHESS GARDEN was also selected as a PW Best Book of the Year in 1995. He has written one book for Young Readers, CAESAR’S ANTLERS, which he also illustrated. In 2009 he released his first memoir, THE BROTHERHOOD OF JOSEPH, and in 2005 he received a John Simon Guggenheim Fellowship for his most recent book, JOHN THE BAPTIZER, which was published in 2009 by W.W. Norton. More recently, his fiction appeared in CENTRAL PARK: AN ANTHOLOGY (Bloomsbury USA, 2012), and he has an essay slated to appear in another upcoming anthology THE GOOD BOOK (Simon & Schuster, 2015).

Brooks Hansen is the critically acclaimed author of The Chess Garden and 7 other books, most recently Asmodeus: The Legend of Margret and the Dragon. He has recently launched his own imprint, Star Pine Books. He lives in Carpinteria, California with his wife and children.