Blurb Blitz & #Giveaway for Deception Island by Judith A. Boss

Welcome to my stop on the Blurb Blitz Tour, presented by Goddess Fish Promotions, for Deception Island by Judith A. Boss.  Please leave a comment or question for Judith to let her know you stopped by.  You may enter her tour wide giveaway, where one (1) randomly chosen commenter will be awarded a $50 Amazon/BN GC, by filling out the Rafflecopter form below.  You may follow all of the stops on the tour by clicking on the banner above, the more stops you visit, the better your odds of winning.  Good Luck! 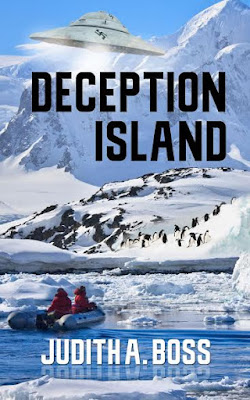 Deception Island
By Judith A. Boss

While at an archaeology dig in Afghanistan, evolutionary anthropologist Rachel St. Claire discovers a pendant with strange shifting symbols. Not long after, she receives an urgent call from her colleague, Dr. Grace McAllister, insisting Rachel come to Antarctica to examine an unusual body with ethereal properties found in an ice cave. Before Rachel can respond, bandits storm the desert dig site.

Just as they are about to seize Rachel, a helicopter appears with Trevor Brookenridge, a handsome polar geophysicist sent by his Aunt Grace to bring Rachel to Antarctica. Sparks fly, but Rachel already has a fiancé. Rachel must decide who she can trust when a group of bioterrorists engaged in secret genetic experiments in an abandoned World War II Nazi base under the Antarctic ice sheet come after the pendant--and her. For it seems everyone knows a secret Rachel does not, one which will change her life forever.

Rachel peered over the rail as the hydrofoil eased into a slip at a floating dock.  Whalebones on the floor of the bay, from the days whaling ships used the harbor, could be seen through the clear water.  As usual, the beach near the dock was bustling with penguins.  A Snow-Cat, a sleek, bullet-shaped vehicle with yellow stripes painted on it, was parked just above the beach line.

As they disembarked and started up the beach toward an awaiting Snow-Cat, some of the gentoo penguins scattered, lurching and stumbling over the cobblestones.  Others raised their bright orange beaks in protest.

“The penguins seem particularly jumpy today,” remarked one of the crew.  “Like something spooked them during the night.”

Two men unloaded what looked like a body bag from the Snow-Cat and loaded it on the hydrofoil.

In the distance beyond a ridge, Rachel noticed a small hut silhouetted by the low sun.  “That’s the Argentinean hut,” said Antonio, shouldering his overnight bag.  After saying a quick farewell to them, he slipped on a pair of snowshoes and headed up to the hut.

“All aboard,” one of the men said.  He reached out a hand and helped Rachel climb up into the cab of the Snow-Cat.

From her seat on the Snow-Cat, Rachel could see the skittish penguins watching the receding vehicle wind its way up to Shackleton Station.  What had upset them?  The very air seemed to bristle with angst.  She glanced over at Trevor sitting across from her, but he didn't seem to notice anything amiss. 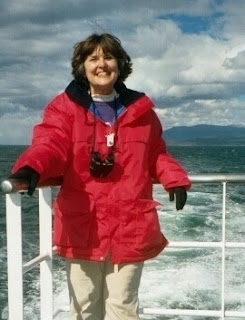 Judith Boss (née Wager) was born in the village of Honeoye Falls, south of Rochester, New York in the heart of wine country. She attended elementary school in Irondequoit, where her family moved when she was two.

When not in school, she enjoyed wandering the woods and fields around her home and picking beans for 25¢ a basket for Mr. King, who owned the truck farm behind her house. She also loved hiking and camping and was active in the Girl Scouts throughout high school.

An avid writer, when Judy was 11 years old she wrote and illustrated her first “novel," a story about her beloved parakeet “Sparky." My Little Sparky was followed by several other short novels and a book of poems.

From Australia, the family moved to Nova Scotia, Canada for graduate school. After graduate school, Judy worked for eight years as a writer/researcher for the Nova Scotia Museum. In 1979, Judy and her two daughters moved to Newport, Rhode Island where she continued to work as a writer. She also worked as a lecturer for several years at the University of Rhode Island before going back to full-time writing.

Judy currently lives in rural Rhode Island with her family and Corgi. An avid traveler, she has traveled with students from the University Of Rhode Island and Brown Medical School to work with undeserved, indigenous people in Guatemala and Mexico. Her favorite travel destination, however, is Antarctica.

a Rafflecopter giveaway
Posted by Maria at Wednesday, November 30, 2016