Welcome to my stop on the Cover Reveal Tour, presented by Pump Up Your Book, for Shepherd Avenue by Charlie Carillo.  Please leave a comment or question for Charlie to let him know you stopped by. 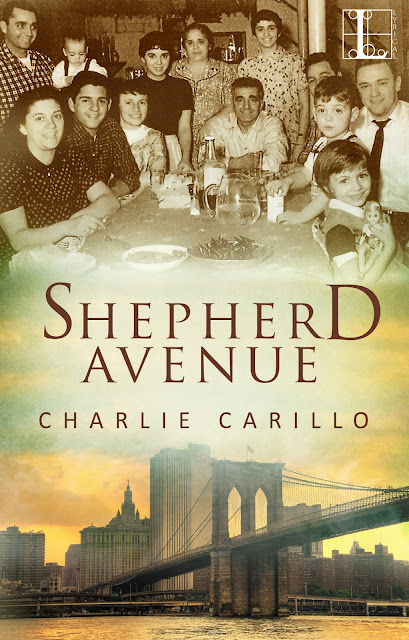 An American Library Association Notable Book of the Year


“An excellent writer and a marvelous storyteller. . . . He creates a special world on Shepherd Avenue that I loved to enter and hated to leave.” –Ferrol Sams

From acclaimed author Charlie Carillo comes a poignant, darkly funny, coming-of-age story set in the heart of Italian-American Brooklyn, New York, and the heat of one eventful 1960s summer . . .

Ten-year-old Joey Ambrosio has barely begun to grieve his mother’s death when his father abruptly uproots him from his sedate suburban Long Island home, and deposits him at his estranged grandparents’ house in boisterous East New York. While his dad takes off on an indefinite road trip, Joey is left to navigate unfamiliar terrain. Besides his gruff Italian grandparents, there's his teenage Uncle Vic, a baseball star obsessed with the music of Frank Sinatra; a steady diet of soulful, hearty foods he’s never tasted, and a community teeming with life, from endless gossip and arguments to curse-laden stickball games under the elevated train. It’s a world where privacy doesn’t exist and there’s no time to feel sorry for yourself. Most of all, it’s where Joey learns not only how to fight, and how to heal, but how to love—and ultimately, how to forgive.

“The best kind of journey, one you don't want to end...funny, moving.” —Mike Lupica

“In the tradition of Tom Perotta…truthful, and hilarious.” —Alison Grambs

“A literary romp through the minefields of a totally normal, and totally abnormal, family… I actually laughed out loud and kept turning the pages to make absolutely sure that all worked out at the end.” –Cathy Lamb “Carillo has an easy way with breezy prose and likable characters.” –Publishers Weekly

Charlie Carillo grew up in Douglaston, New York, a town that was put on the map by three world-class tennis players - John McEnroe, Patrick McEnroe and Charlie's sister, Mary Carillo, now a famous sports broadcaster. The teenage Charlie tried his hand at tennis and lost a match to little John McEnroe 6-0, 6-0.  Charlie won a total of one point and wrote about the humiliating but humorous event years later in the New York Times.

Charlie graduated from Queens College of the City University of New York in 1977.  That same year he won several prizes in the school's writing contest, including one for "the writer showing the most promise."  The cash prize was $300, the first money he ever made without pushing a broom or a lawnmower.   In 1978 Charlie took a job as a copyboy at the New York Post, eventually working his way up to reporter, rewrite man and columnist. In 1993 he switched to television, working as a producer for the news magazine shows "American Journal" and "Inside Edition.” He just moved to London, where he lives with his wife Kim and their labrador retriever, Bailey.

Charlie has a son, Rafael, and two stepchildren, Catherine and James. Charlie's first novel, "Shepherd Avenue," was published in 1986 by the Atlantic Monthly Press.  It was named one of the best books of the year by the American Library Association. Charlie's second novel, "My Ride With Gus," was published in 1996 by Pocket Books, and was translated into German and French editions.  It has been optioned to the movies by Fox.

Charlie's novels "Raising Jake" (2009) and “One Hit Wonder” (2010) were published by Kensington books, and are also available in German editions. His latest novels available on Amazon Kindle are “Found Money,” “God Plays Favorites” and “The Man Who Killed Santa Claus: A Love Story.”