Excerpt Tour & #Giveaway for The Ticket by Debra Coleman Jeter

Welcome to my stop on the Excerpt Tour, presented by Goddess Fish Promotions, for The Ticket by Debra Coleman Jeter.  Please leave a comment or question for Debra to let her know you stopped by.  You may enter her tour wide giveaway, where one (1) randomly chosen commenter will be awarded a $10 Amazon/BN GC, by filling out the Rafflecopter form below. You may follow all of the stops on the tour by clicking on the banner above. The more stops you visit, the better your odds of winning.  Good Luck! 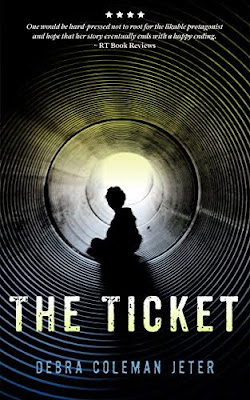 The Ticket
By Debra Coleman Jeter

She hoped winning the lottery would solve her problems.

Her problems have just begun....

It is 1975, an ordinary year for an ordinary Southern family. TRAY DUNAWAY, like thousands of other teenagers around the country, longs to be part of the popular set at school. Tray’s mother, EVELYN, lies in bed most days with a headache, and her bipolar tendency toward extreme highs or desperate lows veers more and more often toward depression. Tray’s grandmother GINNY, who lives with the family, still grieves the loss of her husband, Brook. She believes it’s time for her to move out, if she could afford to, and find a place of her own, maybe even a new romance. This doesn’t look likely, given the state of the family’s finances.

Then something extraordinary happens. A down-and-out friend of the family, PEE WEE JOHNSON, buys an extra lottery ticket. He gives it to Tray’s dad as a thank-you for driving Pee Wee to Hazard, Illinois, where he purchased the tickets. And what do you know?

When Johnson demands his cut, Tray’s dad refuses. As Evelyn’s illness spirals toward madness, Johnson turns threatening, and Tray makes some poor decisions, what initially seems like a stroke of good fortune suddenly triggers a disturbing chain of events.

Dad’s hand is shaking. “Of course it’s a mistake, of course, it is. That idiot, Pee Wee. I’m going to wring his neck for putting me through this when I find out … how can I find out?” Dad’s eyes dart back and forth again, and his shoulders go left as his body goes right, then vice versa. “The ticket. I’ve got to find the ticket.”

I don’t know much about lotteries, not enough to understand exactly what he’s talking about. I’ve heard him joke about Pee Wee and Uncle Jay-bird wasting their time and money driving all the way to Hazard, Illinois, to buy lottery tickets. Based on that, I’m pretty sure my father wouldn’t. What grabs my attention even more than his words, though, is the intensity of his physical reaction. I rapidly finish making the sandwich as he dashes from the room—it’s as if his frenzy is somehow contagious.

My thoughts spin. What could this mean? Could we be rich? Rich enough for me to buy some new clothes? The bluish-violet outfit I tried on but couldn’t afford flashes in my mind, vivid in details I thought were forgotten—the way the pleats hung just so, the way the sweater felt against my skin, the way it matched perfectly, clinging just enough to be, well, almost alluring.

Dad is back then, frantically waving a ticket and the slip of paper with the carefully-written number. “He’s not wrong. It looks like, for once in his pea-pickin' life, that goofy little son-of-a-b—son-of-a-gun is right.” He grabs me and swings me around and around.

I laugh with him—giddy, so giddy—until I’m breathless. I see the outfit still. Periwinkle. “How much did we win, Dad?”

“Enough, enough.” Dad releases me and executes a sort of rowing maneuver with his hands, revealing so much pent-up energy I fear he may explode. In one breath, he lets out a muffled war whoop while in the next he urges, “Don’t tell anyone. Let me think how to do it.”

“I won’t,” I promise. Not only is there a good chance the periwinkle outfit is mine, I also get to be privy to a secret with my father. “How did Pee Wee know about it?”

“That was pretty nice of him,” I say, absorbing this.

“Yeah, it was. But the thing is—now he thinks he deserves a share. He’s demanding his fair share—that’s what he said.” Dad has gone from excited to agitated in one breath.

“What are you going to do?”

For a second, he looks perplexed, vaguely troubled by the question. “I don’t know yet.” Then the confusion evaporates, and he turns to me. “I still can’t believe I won—I actually won. Winning is just something I never expected, not in a million lottery tickets.”

I watch the emotions passing through my father’s green eyes—amazement, disbelief, something akin to joy. Grabbing my hand, he whirls me into a gleeful dance, spinning and twirling me as I have only seen couples do on American Bandstand. I stumble a little, awkward but pleased. 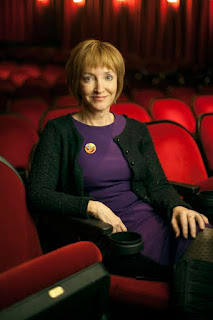 The Ticket is Debra Coleman Jeter’s first novel. It was a finalist for a Selah Award in two categories: Young Adult Fiction and First Novel. A Vanderbilt University professor, Debra Coleman Jeter has published fiction and nonfiction in popular magazines, including Working Woman, New Woman, Self, Home Life, Savvy, Christian Woman, and American Baby. Her story, “Recovery,” won first prize in a Christian Woman short story competition, and her nonfiction book “Pshaw, It’s Me Grandson”: Tales of a Young Actor was a finalist in the 2007 USA Book News Awards. She is a co-writer of the screenplay for Jess + Moss, a feature film which premiered in 2011 at the Sundance Film Festival, screened at nearly forty film festivals around the world, and captured several international awards. She lives in Clarksville, Tennessee, with her husband.

a Rafflecopter giveaway
Posted by Maria at Friday, November 18, 2016