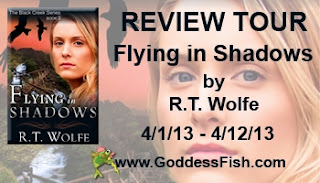 Welcome to my stop on R.T. Wolfe's Virtual Review Tour for Flying in Shadows.  Please leave a comment or question below to let R.T. know you stopped by.  R. T. will be awarding a $25 GC to either Amazon or BN, winner's choice, to a randomly drawn commenter during the tour.  You can follow all of the tour stops here, the more often you comment, the better your odds of winning. 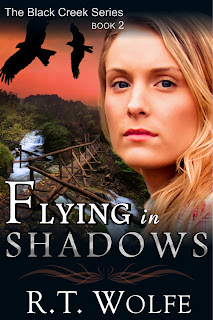 Andy Reed is a fast-talking, high-flying building developer and has been in love exactly one time in his life. Dr. Rosemarie Piper has not only been his best friend since childhood, she is the most highly respected upcoming conservation biologist in the northeast who can, also, hold her own in a bar fight.

Rose learned her love for conservation from her mother. She learned her love for Andy through a lifetime of memories and connections. What she had never learned was she was the product of a brutal assault by a serial rapist and extortionist. Rose’s mother worked for twenty-six years to keep Rose’s identity hidden. Now, Andy vows to keep their polar differences from ripping them apart while keeping her safe and catching a killer.

“Hot, built and sexy is here.” Grace chided as she popped a canapé in her mouth.

“I told you; he’s all yours.” Rose shrugged slightly, watching him laugh with his brother from her peripheral vision.

“Tempting, but I have a date.” Grace gestured to the snack table as said date tipped over a bowl of dipped chocolates onto the white linen tablecloth.

Rose noticed Andy and his date as they walked toward a table holding the shrimp and sushi samples.

Grace elbowed her playfully in the ribs. “It’s the knight. Don’t kick him in the face this time. He saved the cranes.”

“I didn’t … kick him the face.” She wasn’t sure what was more humiliating, striking out at him after she told the crowd not to touch anyone, or missing. “And if you call him that one more time, I’ll kick you in the face.”

Grace laughed and threw her head back along with the rest of her flute, then headed for her date.

Feeling petty, Rose made her way to Andy and rolled her eyes behind his back at the, of course, drop-dead gorgeous blonde that was with him. She put a hand on his shoulder to get his attention. Stupid move.

His face was tight as he turned to look at the hand on his jacket, then softened when he followed it up to lock eyes with her. They stood there for just a moment. But, it was enough. And it hurt. Damn it, Rose. Sheer determination had her primly lifting her chin before she spoke, “Hello, Duncan, Andy. I … suppose I owe you gratitude. And … an apology.”

One of the many waiters who carried flutes of champagne ventured close to them. She rarely drank but looked longingly at the sweet, calming bubbles. Andy took two and handed one to his date.

Tucking some loose strands of hair behind her ear, she played along. “For, you know. The other day, or week or whatever.”

“No. I don’t know.” He took the glass and lifted it to his lips, hiding a grin.

Taking the higher ground, she elaborated, “I apologize for misunderstanding your intentions in the purchase of the reserve land, and thank you for going out of your way to interfere, or intercede I should say.”

Andy held out his flute. She forced herself to look at him, then absently took the champagne from his hand and tilted back a long drink.

“Anything else?” he added.

She looked at his date. Her eyes were darting between them. Rose took another drink. “And for trying to kick you in the face.”

He placed his hand on her exposed shoulder and squeezed. “Try a new move next time.” And walked away.

She sighed and closed her eyes. When she opened them again, she looked down at the empty flute in her hand. “Son of a bitch.”

The second book in The Black Creek series, Flying in Shadows, is a well written romantic suspense.  With likable and well developed characters, good dialogue, and plenty of action, R.T. Wolfe grabbed my attention on the first page and never let go.  Adding in a good mystery, plenty of suspense, and a love for conservation, Ms. Wolfe's world building is believable and well done.

Growing up as childhood friends and neighbors, Rose and Andy find themselves potentially on different sides as adults.  A tomboyish, nature loving conservationist, Rose has become "Dr. Rosemarie Piper", one of the most up and coming conservation biologists on the East Coast, while Andy  Reed has become a successful developer, whose career choice has potentially put him at conflict with his best friend.  When Andy comes back home, they'll have to decide if their friendship is strong enough to survive Andy's new development plans.

The scenes between Rose and Andy begin when they're both very young.  We get to watch their friendship, and eventual mutual attraction, develop as time moves them from children to young adults.  Ms. Wolfe gives us a peak into the first part of the mystery surrounding Rose's background from the start, a mystery she doesn't even realize she's a part of.  As Rose and Andy grow up, Ms. Wolfe slowly develops their individual characters and even takes them in different directions; while Rose is caring, practical, and opinionated, Andy is cocky, talented, somewhat of a flirt.  It's not until Andy finally sees Rose as an adult, that he can acknowledge what Rose has always known - that there's more to their relationship then being best friends.

Adding tension to the story is the mystery of a serial killer and thief who always seems to be somewhere near Rose or her family.  Ms. Wolfe does a very good job developing the mystery part of the story; while we're given clues all throughout the story, the tension, suspense and even terror escalate as the story goes on.  It's only when Rose learns about the horrific events leading up to her conception and birth that she begins to put together the clues for herself.

Will Rose solve the mystery behind a series of crimes before she becomes a serial killer's next target?  Will Andy be able to save the woman he finally realized he really loves?  I encourage you to read Flying in Shadows to find out.  I know I'm looking forward towards the next installment in this series. 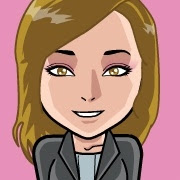 R.T. Wolfe’s romantic suspense, Black Creek Burning, is the first in a series set in beautiful upstate New York. She enjoys creating diverse characters and twining them together in the midst of an intelligent mystery and a heart encompassing romance.

It’s not uncommon to find dark chocolate squares in R.T.’s candy dish, her Golden Retriever at her feet and a few caterpillars spinning their cocoons in their terrariums on her counters. R.T. loves her family, gardening, eagle-watching and can occasionally be found viewing a flyover of migrating whooping cranes.

Don't forget to leave a comment or question below to let R.T. know you stopped by.  R. T. will be awarding a $25 GC to either Amazon or BN, winner's choice, to a randomly drawn commenter during the tour.  You can follow all of the tour stops here, the more often you comment, the better your odds of winning.
Posted by Maria at Monday, April 08, 2013