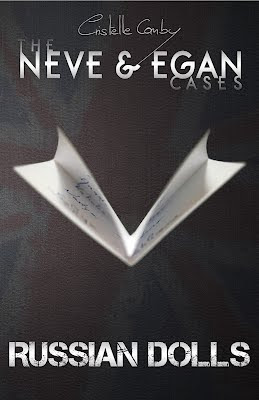 Alexandra Neve is a student at University College London whose world suddenly falls apart. When her best friend jumps from the university’s rooftop, she can’t stop herself from asking, ‘Why?’ The police rule her friend’s death a suicide and for them the case is closed — so whom can she turn to for help?

Sometimes the person you need the most is the one you least expect to find, and in this case it’s none other than Ashford Egan, a blind middle-aged history professor, who’s more willing than most to listen to what she has to say.

Neve and Egan are as different as they come. She’s restless, careless at times, and fearless when the need arises, while he’s almost the complete opposite: a deep thinker with an analytical mind, a highly rational and collected individual.

As they enter the violent world of the Russian mafia, they must overcome their differences and learn to work together. It’s their only chance if they want to survive.

I found myself connecting with Cristelle Comby's Russian Dolls in a way I didn't expect, like her main character I'm somewhat quiet and keep to myself.  I felt as if "Lexa" was a real person and someone I knew .  While I tend to read more romantic suspense than just plain mystery, I really fell in love with Ms. Comby's characters and found myself staying up late and turning the pages to find out what was going to happen next.  Touching on the timely subject of human trafficking, Ms. Comby's story gives us another glimpse into just how pervasive crime can be in our daily lives.

When college student Irina Anderson commits suicide by jumping off the roof of a building, her best friend Alexandra "Lexa" Neve can't believe it was a voluntary choice.  Mostly a loner, Lexa knows Irina had a bright future and wouldn't have ended her life - something or someone had to have forced her to jump.  Determined to conduct her own "real" investigation, she knows the cops have never investigated it as a homicide, Lexa accidentally stumbles across a clue.  A clue that will lead to a new friend, organized crime and a new direction for her own future.

Blind, middle aged Professor Ashford "Ash" Egan knows Alexandra Neve is both quiet and smart.  Her sudden curiosity about Russian geography on the heels of her friend's death, lets him know something is up.  Gaining her confidence is easy, becoming her real friend takes both time and letting her get close.  Something he's had trouble doing.  When it's clear Lexa is in over her head, Ash is determined to help her stay one step ahead of the criminals and help her solve the mystery behind her friend's death.

While mostly a straight mystery/suspense book, Ms. Comby does give us a couple of different relationships inside this book; we get to see Lexa's relationship with her mom, her memories of her relationship with Irina, her growing friendship with Ash, and even the mild beginnings of a romance between Lexa and a local detective.  While Lexa is quiet and hasn't made friends easily, she's honorable, tenacious and devoted to the people she has in her life.  No one is going to get away with hurting one of her friends.

Ms. Comby also gives us Ash, a middle aged professor whose personality issues make him the perfect candidate to be Lexa's friend.  He too has issues with the average person, doesn't make friends easily, and hasn't quite managed to deal with his blindness.  At the same time, he and Lexa share many things in common; he's a decent human being, he's devoted to keeping Lexa safe, and he's able to see things from a different perspective than Lexa, which helps them investigate the crime.

While I was able to identify one of the villains at the start of the story, or at least I was suspicious of him from the start, Ms. Comby does a good job of keeping both the mystery alive and the plot moving at a good pace.  While the police don't exactly come off as a shining example of justice at the beginning of this story, they do manage to get it together towards the end.

Will Lexa and Ash solve the mystery behind Irina's death and discover the identity of the mastermind behind the crime?  You'll have to read Russian Dolls, the first book in the Neve & Egan Cases to find out.  I can't wait to see what adventure Lexa and Ash find themselves involved in next.

FTC Disclosure:  I received a complimentary copy of this book as a part of a book tour in exchange for a fair and honest review.
Posted by Maria at Wednesday, April 03, 2013