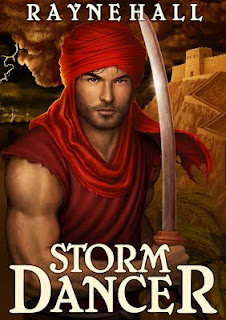 
Demon-possessed siege commander, Dahoud, atones for his atrocities by hiding his identity and protecting women from war's violence - but can he shield the woman he loves from the evil inside him?

Principled weather magician, Merida, brings rain to a parched desert land. When her magical dance rouses more than storms, she needs to overcome her scruples to escape from danger.

Thrust together, Dahoud and Merida must fight for freedom and survival. But how can they trust each other, when hatred and betrayal burn in their hearts?


'Storm Dancer' is a dark epic fantasy. British spellings. Caution: this book contains some violence and disturbing situations. Not recommended for under-16s.

Taking place in an exotic desert land, Storm Dancer by Rayne Hall is a fantasy full of action, violence and the desire for atonement.  Colorful, well developed characters fill the pages while the battle between good and evil rages across the desert lands and drives the characters on.  Somewhat darker than the fantasy novels I normally read, Storm Dancer is not for a young or sensitive reader; there are torture scenes, scenes with graphic violence and even the occasional rape scene.

Dahoud, an accomplished general, walked away from his successful military career due to his belief of demonic possession.  Conflicted with guilt over the acts of violence against victims the "djinn" inside him insists he commit, he's been working as a lowly "clerk" for one of the satraps in the kingdom.  When he receives a summons from the Queen and King, he discovers his secret identity is no longer secret and fears he'll be drawn into some kind of battle.  While he plans to plead his way out of having to do battle, he can't resist the King's promise of a satrap position of his own and the hand of Esha, a lovely, young maiden who actually appears to like him.

Merida, a weather magician and citizen of a Northern kingdom, is sent by her king to the southern desert kingdoms.  She's instructed to bring rain to the desert and help bring "enlightenment" to the people.  Traveling across the harsh desert terrain, she soon finds herself crossing paths with a warrior bent on complete destruction of the area.  While they appear to be at cross purposes, Merida soon finds herself accompanying the desert general.

The scenes in the desert are full of struggles against the harsh land, misunderstandings between Dahoud and Merida and a villain, Kirral, whose plot is nasty and horrific.  Dahoud and Merida soon realize they'll have to put their differences aside if they wish to advance against a now common enemy.  I enjoyed how Ms. Hall developed both main characters; Merida is forced to let go of some of her thoughts regarding the people living in the desert and becomes a stronger woman because of her interactions with Dahoud.  Dahoud himself begins to understand the "darkness" within him and learns to harness, and mold it to his will.

The secondary characters are well written and the villain is smart, devious and definitely  a person who deserves to be punished.  Besides the violence there is one other aspect of the story that gave me issues; the story's pace was somewhat uneven.  The story began at a decent pace, slowed down quite a bit in the middle and then sped towards the end. I believe if the author had cut some scenes out of the middle, the story would have moved faster and would have been easier to follow.

Will Dahoud and Merida realize they are the answer to each other's missing part?  Will they be able to put an end to the rebellion and rebuild the cities that were destroyed?  You'll have to read Storm Dance to find out.

FTC Disclosure:  I received a complimentary copy of this book in exchange for a fair and honest review.