Welcome to my stop on Victoria Barrow's Blog Barrage for Siren Snow.  Please leave a comment or question for Victoria to let her know you stopped by.  You can enter Victoria's tour wide giveaway by filling out the Rafflecopter form below.  You can also follow her tour stops here. 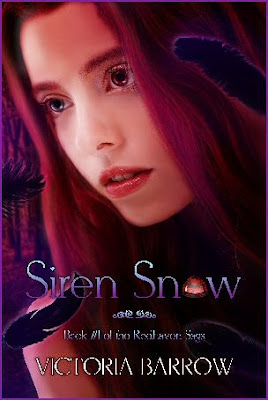 Winter is not exactly the ‘season of the witch’. It’s cold in , and everything is covered in snow. But it doesn’t bother Lucilla Sinclair, the fiery Witch-Warden for . She’s perfectly happy performing minor enchantments at her little arcane shop in Redhaven, an old fishing town turned tourist attraction. Besides, her tall, dark-skinned elemental guardian Mishal keeps her warm at night. Her raven familiar, Irwin, helps her to pass the time in the otherwise sleepy town.

Magickal mischief in the cold, quiet state is slow for the most part, but when a freak winter storm lands a half-transformed Siren on her front porch, Lucy’s life becomes increasingly strange. Her dreams are suddenly assaulted with visions of a beautiful demon man, and her waking hours are spent warding off a cadre of mysterious shadow creatures.

With the life of the Siren in her hands, Lucy must trek through the snows of in a race against time. Her mission: to find the one person with enough knowledge of forbidden black magick to fix the broken Siren Melusine before her seven days on land are up.

This is gonna be a rough week.


I was mesmerized by his harvest moon eyes, and couldn't pull myself away. The winding pressure of his strange tail looped around my calf, and I felt my leg pulled up and around him. I thought perhaps I might fall from the sudden unbalance, but his clawed hand found the small of my back, and kept me upright. That beautiful dark mouth spoke again, but I wasn't aware enough to catch what he said.

All I could feel was the press of his hand on my back, and the softness of his leathery wings around me. I was in the cocoon of them, drawn by his alluring eyes and exoticness, trapped by his enormous wings, and for some reason, I was totally okay with that. Never mind the strange giant at my door – my attentions were totally for this... creature.

That delightfully clawed finger stroked my cheek again, and I sighed. He edged that claw around my chin to trace the line of my jaw in a wonderfully delicate point. He lifted my chin to look at him, and I saw his face drawing close to mine. My heart found its familiar spot in my throat again, but it wasn't out of fear this time; it was out of anticipation.

His black snake tongue edged out between his teeth again, and my face was abruptly turned to the side as it licked up the side of my cheek in a hot, electric line. I made a soft sound, low in my throat, and the tail wrapped around my calf tightened. The press of his wings brought us close, and as his mouth found my neck, I sucked in a sharp breath tainted with the spice and sweetness of him.

He pressed me hard against him, and my hands found the sculpted smoothness of his chest. That strange, alien mouth worked delicately at the soft flesh of my neck, and I felt the many needle points of his teeth, pressing just hard enough to let me know they were there, but not hard enough to hurt me. He had wonderful control, this demon man.

His free hand found the far side of my face and cupped it in his warm palm, pressing my jawbone against his cheek. That slender tongue flicked across my jugular, and my heart beat wildly in his mouth. The longer I stayed in contact with him, the more I wanted him, and the more nothing else mattered. I had forgotten about Irwin and Mishal, and the Siren in my bathtub. I had even forgotten about the giant cloaked figure at my door, until he spoke, his voice low and rumbly. I didn't catch what he said, or if he was speaking to me or the demon at my throat, but I didn't care. The demon laced his fingers into my fiery red hair and the world dissolved with the passing whisper of his voice, close and in my ear.

“Siren Snow is the story of Lucy Sinclair, the young Witch-Warden for . She spends most of her days working in her shop and taking care of the routine magical needs of the folks under her care. Until a strange storm brings more than just a blizzard. A sea creature from the depths of the sea is just the beginning of Lucy’s troubles. When an injured siren washes up on shore, Lucy must embark upon a dangerous journey to save her.

This story is a fantastical adventure featuring mythical and magical beings, both traditional and those created by the author’s rich imagination. The characters are well drawn and engaging, and you’ll fall in love with the varied cast. From Mishal, Lucy’s hot elemental guardian (and I do mean hot!) to Mel, the stoic Siren, the author introduces the reader to characters we’ll sorely miss once we finish that last page.

Siren Snow is not without romance, though Lucy’s love life does take back seat to her heroic endeavors. Mishal, her best friend and protector, sticks by Lucy’s side, providing unwavering support. There are a few tender moments between them, but Lucy is holding back. She has a secret that involves a demon from her dreams. Twists, turns, and surprises await Lucy on her journey and the ending will leave you breathless.

I’m waiting anxiously for the next book in the series and once you read it, you will too. I highly recommend this book.”--Tricia Drammeh, author of The Claiming Words

“I thoroughly enjoyed this book. It really drew me in even in the first chapter. I couldn't help but read the entire thing in just two days!

The characters are very likeable. I already feel that I know them well, despite this being the author's first book. It's so easy to share Lucilla's triumphs, and to feel empathy for her shortcomings.

The unexpected adventure certainly kept me interested, and the surprises were enough to keep me on my toes. I don't want to say too much, but I found the motel scene to be particularly haunting, in a very good way!

The story is very well-told. A few loose ends are left untied - intentionally, I am sure - to set the stage for later entries in the saga. However, the focus of this particular book is fully realized, in a singularly satisfying manner.

I am eagerly awaiting the next installment of this series; it's really got me hooked! All in all, I would love to schedule a trip to Redhaven myself in order to meet Lucilla Sinclair and her companions!”--Phillip Anderson, Goodreads Reviewer

“Truly an amazing book. has definitely set the bar high for up and coming indie authors. Her attention to detail is not over looked as well as her genuine care and concern for her characters. I would recommend this book to any one who asks. The story line is so nicely done that you are drawn in from page one. This is a MUST READ.”--Maegan Provan, Author

About the Author
A native, Victoria currently lives in with her fiance and their two kitties (read: furry children.) She has a moderately unhealthy obsession with MMORPGS, and when she's not writing, spends a lot of time shooting bad guys. (Stupid Horde.)

Her bookshelf includes everything from Tolkien to plumbing (just one though... pipes are boring but nescessary). She's very fond of anything urban/paranormal fantasy, and has an entire shelf dedicated to zombies. (Never hurts to be prepared.) 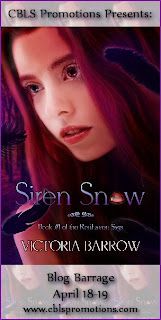 a Rafflecopter giveaway
Posted by Maria at Friday, April 19, 2013