Welcome to my stop on Kathleen Harrington's Tasty Virtual Book Boor for Lachlan's Bride.  Please leave a comment or question for Kathleen below to let her know you stopped by.  You can follow her blog tour here.

Guest Post Tails Beneath The Tartans
by Kathleen Harrington
During my research for THE MAC LEAN GROOM, the first book in the Highland Lairds Trilogy, I stumbled on an astonishing fact. During the Middle Ages many of the English people believed the Scottish Highlanders wore kilts to hide the fact that they had tails. Believe it or not, those foolish Sassenachs actually thought all Highland men concealed tails beneath their plaids! Truth is indeed stranger than fiction! But then again, if you consider all the other superstitious beliefs which were common at the time---such as the presence of witches and sorcerers, elves and faeries---this misconception doesn’t appear quite so outrageous. From this incredible belief about Highlanders came my heroine’s dread that the hero of THE MAC LEAN GROOM hid a tail beneath his tartan. Joanna MacDonald suspects that Rory MacLean sports a dragon’s tail under that red and black plaid. And she's determined to discover the truth, while at the same time resisting her future groom's attempts to wed her and bed her. Which, of course, leads to some rather comic situations. Most people in the Middle Ages believed that Black Magic was practiced by witches and wizards. It was not unknown for some poor soul to be burned or hanged for such an offense, the only "proof" being that the accuser’s sheep had died after being given the Evil Eye by the accused. (The last execution of a witch took place in Scotland during the 1700's.) Also widespread was the belief that a faery would give you all you asked, if you could only answer a secret riddle correctly. Not an easy thing to do, of course. Sort of like winning the lottery today. The belief in the "little people" persisted among the rural inhabitants of the Highlands well into the 1800's. In LACHLAN’S BRIDE, the second book of the Highland Lairds Trilogy, the heroine, Lady Francine Walsingham, operates under a misconception just as common in the Middle Ages as the belief in tails hidden beneath Scottish kilts. Francine suspects that Laird Lachlan MacRath, the man chosen by her king to guide and protect her, is a sorcerer. She believes that Lachlan has placed her under a magic spell. During their journey from England to Scotland, she searches for the key that will unlock the enchantment and set her free. That includes trying to discover the answers to all the faery riddles ever told. Francine is nothing if not determined and single-minded. Here's an excerpt from LACHLAN'S BRIDE: ******************************************************** "Do you sir?" Angelica (Francine's daughter) asked Walter MacRath. "Do you really like puppet shows?" From his great height, Walter (Lachlan's uncle) gazed down at the five-year-old and a broad smile creased his bearded face. "Aye, ye've the right of it there, lass," he boomed in his gravelly voice. "The only nonsense I like better than puppetry is telling faery riddles to halflins who always obey their mothers." Angelica broke into a delighted giggle. "Will you tell me a faery riddle later?" "Och, I may, lassie, I may," Walter replied. "But Laird Lachlan, here, can tell you far more than me ownself ever could. By Thor's hammer, The MacRath kens the answer to every faery riddle that's ever been told." Francine jumped to her feet. "You do?" she asked Kinrath. She whirled to face Walter. "He does?" 'Twas just as her falcon-keeper had predicted The answer to every faery riddle that had ever been told! Before the older man could reply, Kinrath slipped his arm about Francine's waist. "My uncle likes to exaggerate," he said with a dismissive shrug. "Now take your daughter's hand, Lady Walsingham, and let's go see the puppet show." ****************************************************** I truly enjoyed writing Lachlan and Francine's story. I had so much fun playing with the idea of a hero who just may be a sorcerer. Or not. I’m thrilled with the upcoming release of my book, LACHLAN’S BRIDE! And delighted that Avon has arranged a blog tour to acquaint readers with my latest historical romance. Thank you for inviting me to share my thoughts with your readers. They may find me at the following places: http://www.kathleenharringtonbooks.com http://www.facebook.com/kathleenharringtonbooks Twitter@kathleensbooks http://www.avonromance.com/author/kathleen_harrington 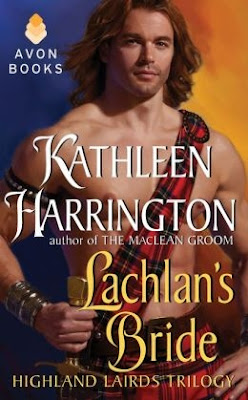 He is Lachlan MacRath, laird and pirate. And he intends to be her lover…

Lady Francine Walsingham could not believe this fierce Highland warrior is to be her escort into Scotland. It is whispered that Lachlan MacRath has magical powers…how else do you explain why her countrymen call him the Sorcerer of the Seas? But trust him she must, for a treacherous plot is about to reveal all her secrets…and Francine has no choice but to act as his lover to keep her enemies at bay.

When Lachlan first sees Francine, the English beauty stirs his blood like no woman has ever before. As luck would have it, they must now play the besotted couple so he can protect her ….and Lachlan is determined to use all his seductive prowess to properly woo her into his bed.

Excerpt PROLOGUE May 1496 The Cheviot Hills The Border between England and Scotland Stretched flat on the blood-soaked ground, Lachlan MacRath gazed up at the cloudless morning sky and listened to the exhausted moans of the wounded. The dead and the dying lay scattered across the lush spring grass. Overhead the faint rays of dawn broke above the hilltops, as the buttercups and bluebells dipped and swayed in the soft breeze. The gruesome corpses were sprawled amidst the wildflowers, their vacant eyes staring upward to the heavens, the stumps of their severed arms and legs still oozing blood and gore. Dented helmets, broken swords, axes, and pikes gave mute testimony to the ferocity of the combatants. Here and there, a loyal destrier, trained to war, grazed calmly alongside its fallen master. Following close upon daylight, the scavengers would come creeping, ready to strip the bodies of anything worth a shilling: armor, dirks, boots, belts. If they were Scotsmen, he'd be in luck. If not, he'd soon be dead. There wasn't a blessed thing he could do but wait. He was pinned beneath his dead horse, and all efforts to free himself during the night had proven fruitless. In the fierce, running battle of the evening before, the warriors on horseback had left behind all who'd fallen. Galloping across the open, rolling countryside, Scots and English had fought savagely, till it was too dark to tell friend from foe. There was no way of knowing the outcome of the battle, for victory had been determined miles away. Hell, it was Lachlan's own damn fault. He'd come on the foray into England with King James for a lark. After delivering four new canons to the castle at Roxburgh, along with the Flemish master gunners to fire them, he'd decided not to return to his ship immediately as planned. The uneventful crossing on the Sea Hawk from the Low Countries to Edinburgh, followed by the tedious journey to the fortress, with the big guns pulled by teams of oxen, had left him eager for a bit of adventure. When he'd learned that the king was leading a small force into Northumberland to retrieve cattle raided by Sassenach outlaws, the temptation to join them had been too great to resist. There was nothing like a hand-to-hand skirmish with his ancient foe to get a man's blood pumping through his veins. But Lord Dacre, Warden of the Marches, had surprised the Scots with a much larger, well-armed force of his own, and what should have been a carefree rout turned into deadly combat. A plea for help interrupted Lachlan's brooding thoughts. Not far away, a wounded English soldier, who'd cried out in pain during the night, raised himself up on one elbow. "Lychester! Over here, sir! It's Will Jeffries!" Lachlan watched from beneath slit lids as another Sassenach came into view. Attired in the splendid armor of the nobility, the newcomer rode a large, caparisoned black horse. He'd clearly come looking for someone, for he held the reins of a smaller chestnut, its saddle empty and waiting. "Here I am, Marquess," the young man named Jeffries called weakly. He lifted one hand in a trembling wave as the marquess of Lychester drew near to his countryman. Dismounting, he approached the wounded soldier. "Thank God," Jeffries said with a hoarse groan. "I've taken a sword blade in my thigh. The cut's been oozing steadily. I was afraid I wouldn't make it through the night." Lychester didn't say a word. He came to stand behind the injured man, knelt down on one knee, and raised his fallen comrade to a seated position. Grabbing a hank of his yellow hair, the marquess jerked the fair head back and deftly slashed the exposed throat from ear to ear. Then he calmly wiped his blade on the youth's doublet, lifted him up in his arms, and threw the body face down over the chestnut's back. The English nobleman glanced around, checking, no doubt, to see if there'd been a witness to the cold-blooded execution. Lachlan held his breath and remained motionless, his lids lowered over his eyes. Apparently satisfied, the marquess mounted, grabbed the reins of the second horse and rode away. Lachlan slowly exhaled. Sonofabitch. He knew the English were a bloodthirsty race. But he hadn't thought that included the murder of a helpless patriot on a deserted battlefield. What kind of bastard did such a traitorous thing? 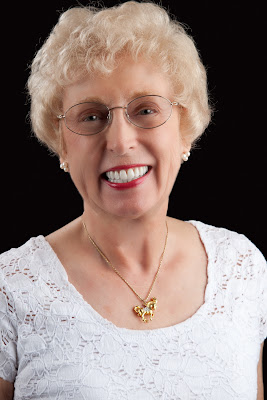 Author Info KATHLEEN HARRINGTON, winner of the Colorado Romance Writers’ Award of Excellence, has touched the hearts of readers across the country with her sparkling tales of high adventure and unending love. Her historical romances have been finalists for the Romance Writers of America’s RITA, The Romantic Times Reviewers’ Choice Awards, the Virginia Romance Writers’ HOLT Medallion, and the Phoenix Desert Rose Golden Quill. Her fabulous heroes have garnered the KISS (Knight in Shining Silver) Award. She lives in Southern California. Author Links http://www.kathleenharringtonbooks.com/ Twitter: https://twitter.com/kathleensbooks//@kathleensbooks