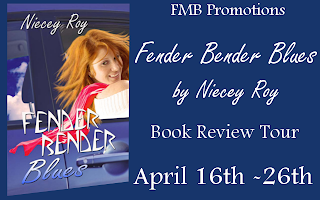 Welcome to my stop on Niecey Roy's Book Review Tour for Fender Bender Blues.  Please leave a comment or question for Niecey to let her know you stopped by.  You can fill out the Rafflecopter form below to enter her tour wide giveaway.  You can also follow her tour schedule here. 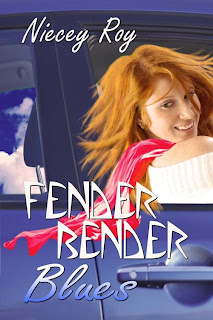 Her life took a wrong turn. He's driven by success. They didn't count on crashing into love...

Rachel Bennett loved her job until the day she finds herself doubting her choices.  Now she's hunting for a new career, but starting over isn't easy.  Her plan is simple—no distractions until she finds her dream job.  She didn't plan on fate throwing her a curveball in the form of a fender bender with a sexy guy in an expensive suit.

Craig Larsen is a wealthy, successful business owner with a plan of his own: survive his current PR nightmare and stay away from his overly determined ex-girlfriend.  His need for control and personal success is turned upside down when he meets Rach, a sassy redhead who can't drive.

Soon they find themselves battling with Rach's grumpy old neighbor, toilet-papering the trees of a high school nemesis, and fighting over the last slice of pizza.  Can two very different people plus one fender bender equal a chance at forever?

Love and laughter are side by side in Niecey Roy's romantic comedy Fender Bender Blues.  A likable heroine, a tarnished hero and lively dialogue pulled me into Ms. Roy's world and kept me turning the pages.  While parts of the story were somewhat predictable, I found this to be an entertaining book.

For the last six months Rachel Bennett has struggled with the decisions of her past.  Leaving her job as a social worker due to fear of failure has made her doubt herself in ways she never imagined.  Attempting to start over, she finds herself involved in a fender bender, caused by her attempt to put on lip gloss while driving, that changes her life in ways she never dreamed possible.

A successful businessman, Craig Larsen can't believe his sudden run of bad luck; first a frivolous lawsuit that has turned into a public relations nightmare and then a fender bender with a woman who wasn't paying attention.  Luckily she has good insurance, unfortunately she's also the best friend of his younger brother's new girlfriend.  Determined to keep control of his life, Craig wasn't prepared for the red headed tornado being unleashed in his life.

The scenes between Rachel and Craig are a lot of fun - they have a very snarky, give and take style of dialogue. Rachel is outspoken, feisty and very much a modern woman who won't let Craig, and his good looks, get away with bad behavior.  Ms. Roy does a good job with developing their characters and it was very easy for me to identify with Rachel, and like Craig.  Even though neither has really ever been in love, it was easy to see that they were falling for each other in a big way and to hope their relationship could work.

The secondary characters were well written and all played a significant role in Rachel and Craig's story.  From Leah, Rachel's best friend, and Rick, Craig's brother, to Rachel's crazy neighbors.  Even the character who's more of a villaines, Maggie, is well done and easy to dislike.

Will Craig realize Rachel is the woman he wants to spend the rest of his life with?  Will he learn to put their relationship above his work?  And will Rachel realize her happiness might lie in forgiveness?  You'll have to read Fender Bender Blues to find out. 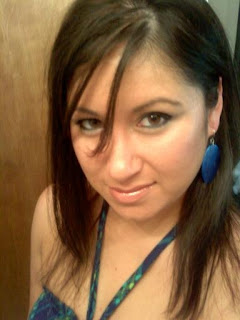 I became a writer at a young age, but my moment of enlightenment came after watching the movie You’ve Got Mail. It was then that I realized my place in life and I happily parked my butt on romance. My dream was to create sexy vixens, hunky, half naked heroes, and above all, romance; lots and lots of butterflies in the belly, breathless first kisses and happily-ever-afters.

So here I am pounding my tired little fingers away on a keyboard in a cluttered office with nothing but black pepper flavored sunflower seeds and Visine as my weapons for mass-romance-novel-creation. When my fingers need a break, you will find me at a table with friends, drinking a few martinis and showing off a new pair of heels. I am usually the loudest at the table and most often snorting with laughter.

Another passion of mine is cooking. Because I love everything about food—cooking it, smelling it, eating it—I always incorporate food into my writing. I can't help it, I kind of have a one-track mind. It’s the product of growing up with a Polish grandma who spent most of her time in the kitchen singing her face off while cooking everything with butter, and having a Filipino mother, who loves to feed me and always makes my favorite Asain dishes in abundance. Talk about cultural diversity!

My husband is my muse, he just doesn’t know it. Much of the humor in my books can be attributed to him, and I constantly find myself rushing to my office or the nearest scrap of paper to jot down something he’s said. We have a good thing going—I never tell him how to restore his cars, and he never complains about my shoe obsession. We are blessed with three beautiful kids who keep us grounded and on our toes at all times.

During the summer you will almost always find me lying out in the hot Nebraska sun at my parents' place, Tin Man Airboats, where the river is their backyard. There, I can kick back with my loud, obnoxious family around a campfire with a couple of beers. Family is very important to me. My sisters are my best friends and have always been my biggest cheerleaders. I am grateful for their love and support and consider myself very lucky to have them in my life. 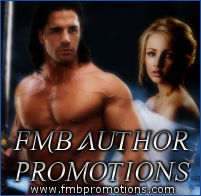 a Rafflecopter giveaway
Posted by Maria at Tuesday, April 16, 2013