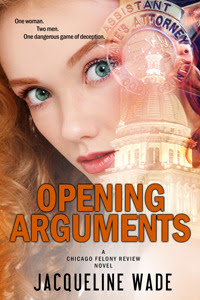 Assistant state’s attorney Kate Campbell believes in truth, justice, and hard work. The youngest attorney in Cook County’s felony review division, she’s determined to make a difference—even if it means occasionally bending the rules. When a case forces her to work with the man she rejected five years earlier, she can’t help but wonder what might have been.

Ethan Bradfield spent the past five years rebuilding his life. Devastated by Kate’s rejection, he walked away from a promising legal career and the life he expected to lead. When an assassination attempt on his boss, Congressman Owen Brown, brings Ethan face-to-face with Kate, he’s not about to give up his second chance—regardless of the cost.

Criminal defense attorney Blake Edwards battles with Kate inside the courtroom, but outside of it, he’s looking for a more intimate relationship. A rising star in Chicago, Blake gets what he wants—and he wants Kate.

A big fan of romantic suspense and mystery, I looked forward to reading Jacqueline Wade's Opening Arguments, her debut release.  An interesting plot, the city of Chicago, and a likable heroine, are at the heart of this tale.  While I did have some issues with the story, overall it's a decent first story.

Young, attractive and very smart, Kate Campbell believes in the justice system and as the youngest attorney in Cook County's Felony Review division, Kate is determined to let nothing get in the way of justice being served.  When she gets a call from the police in regards to a breaking case, she doesn't expect to run into someone from her past, especially the man whose proposal she rejected five years ago.

Working for Congressman Bowman of Illinois is not what Ethan Bradfield had planned on doing after graduating from Harvard.  His plans to live in D.C. and capitalize on his law degree from Harvard had gone up in smoke when the girl who stole his heart said no to his proposal.  Now, five years later, Ethan can't believe his luck, an assassination attempt on his boss brings Kate back into his life.  Given a second chance, he's not about to let her get away from him again.

The scenes between Kate and Ethan are full of emotional and physical tension.  Both harboring broken hearts, they'll have to learn to let go of the past if they want to be in each other's lives in the future.  Ms. Wade adds in some additional "relationship" tension by introducing a second man, Blake Edwards, a high profile criminal defense attorney, who's determined Kate should be his.  While I liked Kate's character, I really had issues with both male characters who behaved more like Alpha-Boors than Alpha males.  I especially had issues with Ethan whose behavior in the past was rather childish.

Will Kate be able to win the case that can make her career, or will her romantic entanglements cause problems for her at the end?  You'll have to read Opening Arguments, to find out.  I'm looking forward to seeing how Ms. Wade develops this series.

FTC Disclosure:  I received a complimentary copy of this book from a blog touring company in exchange for a fair and honest review.