Welcome to my stop in E.M. Haven's Virtual Book Tour for Fate War: Alliance.  Please leave a comment or question for E.M. to let her know you stopped by.  You can enter her tour wide giveaway by filling out the Rafflecopter form below. 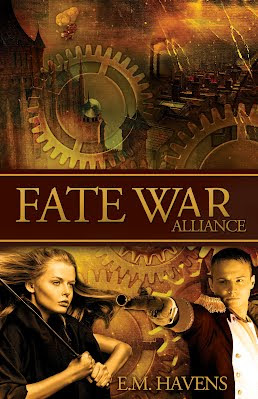 Prince Cole meets Samantha when she walks down the aisle. Though she seems like the polished women he is familiar with, there is something different. She is complicated and full of mystery. Her dowry comes with a promise of air ships and mech capable of defense against their common enemy and for his country to survive, he must unravel her secrets. It is only when each accepts their destinies can they save their people from the plans of the Fate Sovereign.

EXCERPT:
A Gift for Sam
“This is your surprise.” He gestured towards a building a few paces away from the heap of Fate mech.
“A shed?” Sam eyed him warily.
“Open the door, silly.” He placed his hand on the small of her back, and ushered her into the room. The lamp light sparkled off of her wonder filled eyes.
“How…When…” She rushed into the room, investigating in earnest. Tinker tools and supplies filled the shelves lining the walls. A work bench occupied the far end of the shed, outfitted with a large set of magnifiers.
“The Tinker in Sagewood, he wanted to retire so I bought him out and had the shop moved here. It’s yours. Of course you’re still welcome to visit me in my laboratory anytime you wish.” He gave her a courtly bow, and by the time he rose, she was on him.
Caught off guard by her advances he fell back into the workbench, toppling boxes of screws and cogs. He didn’t care because her lips found his. She bit his lip teasingly and he returned the favor. He fleetingly thought he had helped awaken more than her sense of self when her hands began tugging at his shirt.
Cole swept his hand across the work bench clearing it of various tools and boxes, sending a magnifier crashing to the ground. He spun Sam around and lifted her to the table. He stepped into her and she cradled him in her thighs. His hands found the hem of her shirt as well and he barely restrained the urge to rip it off instead of unbuttoning it. Her hands worked feverishly at his, stopping occasionally to pull his lips back to hers.
“Damn,” he cursed, getting stuck on a particularly rebellious button, and realized Sam had stopped her attentions to him. She stared at nothing with her head cocked, listening. He was about to ask her what was the matter when he heard it too, the rhythmic thrumming of an air ship.
Without a word, they quickly made themselves presentable and hurried outside. The airship was just visible, approaching over the treetops, a trail of smoke in its wake. Cole grabbed Sam’s hand and pulled her toward the lawn where they would have a better look as it flew over, on its way to the clearing.
“No.” Sam hissed. The ship’s airbladder was Perspician blue, and the ship itself was ornate enough to belong to only one passenger. “Mother.”

Who is E.M. Havens? I’m a lot of things. The word that seems to define me most at the moment is mom.  It can be all consuming. Not only am I a mom of three (one of them is a teenager…pity me), but I also home-school (pity me more). I share this awesome responsibility with the love of my life, best friend, and soul-mate husband.
Add to that, the twenty-five chickens, twelve turkeys, ten guineas, nine pigs, three barn cats, two
Great Pyrenees guardian dogs, a Chihuahua, a house cat, and a goose, it makes for one crazy, full, and certainly entertaining life.
Somewhere in there I find the time to write. I started out young writing poems, then moved on to
songs. I actually have a Bachelor in Music with a secondary in Science because I can’t stand English. Yes, the writer hates English. I like to read the story for the experience of reading the story, not to nitpick each letter and comma. But I digress.
I eventually found blogging and really enjoyed sharing my life that way. When an unfortunate turn of events separated me from my music equipment, I decided to use my overactive imagination, my love of reading, and my new found hobby, prose writing, to release some of my creative energy. I wrote my first novel and loved the experience. Fate War: Alliance is actually the second novel I wrote and the first to be published. Now I’m working on my third and several sequels to Fate War!
So that’s pretty much me, sitting in the Arbuckle Mountains of Oklahoma, reading, writing, collecting eggs from the coop, and being a schoolmarm. It’s a pretty great life.
Links:
facebook.com/thefatewar
twitter: havensem
www.emhavenswrites.blogspot.com

Creating a fantasy world filled with steampunk gadgets and a royal romance, E.M. Haven's Fate War : Alliance  is a captivating read.  Likable characters, sharp dialogue and plenty of action, kept me turning the pages to discover what was going to take place next.  If your a fan of either fantasy or steampunk - this is a book you'll want to add to your reading list.

Headstrong and determined to forge his own path, Prince Cole of Arborea does not want to be his father's royal successor.  Especially when it comes with an arranged marriage to a royal lady from the Island of Perspicia;  a woman he's never met. Forced by necessity, Cole has no choice but to marry since his country needs mechanical creations to save themselves from the Fate Army determined to conquer his people. Expecting his bride to be a simpering female, Cole just may be in for the shock of his life.

Lady Samantha of Perspicia knows her destiny is to marry the man her father chooses. Schooled in courtly behavior, Samantha knows she can't run away from her duties, even if that's what she really wants to do.  Strong, smart and filled with her own dreams, Samantha is determined to carve out her own life.  She just never planned on falling for Prince Cole.

The scenes between Cole and Samantha are well written and very entertaining.  Adding in a world full of airships,. Mechmen and other mechanical objects, Ms. Haven treats us to a vividly created world which is unlike any other.  As Cole and Samantha begin to the discover the real people they are behind their titles and expected court behavior, their shared interests and desires take center stage.  I liked how Ms. Haven developed their relationship and gave them just the right amount of romantic steam.

Will Cole and Samantha follow through with their arranged marriage?  Will their marriage provide the safety their countries need against an advancing enemy?  You'll have to read Fate War: Alliance to find out.  I enjoyed it and I think you will too.  I also think it's the perfect beginning for a potential series, which I hope Ms. Haven writes because I would love to get to see these characters again.

FTC Disclosure:  I was provided a complimentary copy of the book reviewed as a part of a book tour in exchange for a fair and honest review. 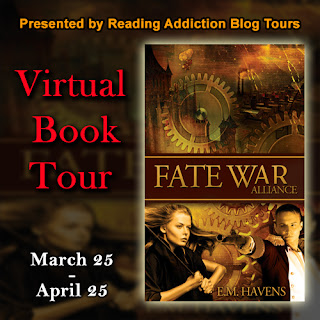 a Rafflecopter giveaway
Posted by Maria at Thursday, April 18, 2013