Welcome to my stop on the Virtual Tour, presented by Goddess Fish Promotions, for Toru: Wayfarer Returns by Stephanie R. Sorensen.  Please leave a comment or question for Stephanie to let her know you stopped by.  You  may enter her tour wide giveaway, where one (1) randomly chosen commenter will be awarded a $50 Amazon/BN GC, by filling out the Rafflecopter form below.  You may follow all of the stops on the tour by clicking on the banner above.  The more stops you visit, the better your odds of winning.  Good Luck!

I stumbled upon my characters through research, imagination, real people and “misbehavior.”

I started a bit backwards, deciding on my genre (steampunk alternate history) and setting (1850s Japan) before finding my characters and story. I had a big, generic societal problem (“Japan is under threat from the foreigners”). I had this vague idea of using dirigibles to fight the foreigners, but hadn’t worked out the person, the character, the hero who would take on solving the problem.

So I did what I always do when facing a problem: I go read everything I can about a topic and wallow in facts for a while, marinating in them until it feels safe to come out again.

I suppose this could be called “research” but a more honest answer is “panic and avoidance,” for in some dim corner of my brain I knew I could not write a story without characters and I had none. In this case, the research phase, aka panic and avoidance phase, actually yielded wonderful fruit—the true story of Manjiro, a shipwrecked ship’s cook who returned to Japan just before it opened to the West. He was spared execution by the Shogun and raised to samurai status in recognition for the small role he played in educating the Japanese government about the Americans. Here was the kernel of a story! What if my hero was not an uneducated ship’s cook, but someone with the education and intelligence to truly understand and bring back to Japan an understanding of the West’s technology and industrial power, a kind of Prometheus bringing fire to humanity?

So I spent some time dreaming up a backstory for Tōru. He had to grow up somewhere poor and humble and rural, far from the capital, but somehow have this fabulous education and understanding. So I gave him a fancier background and a much higher IQ than poor Manjiro, as the illegitimate son of a great lord who saw to his education. He had the common touch, though, as he had been raised by his mother in a rural fishing village with the other rough boys of the village.

I then remembered something I had read long ago about, of all people, Jesus Christ, and how the great compassion and empathy of his teachings as well as his revolutionary rejection of the religious institutions of his time were rooted in his experience as an illegitimate child of an unwed mother in a society that despised such women and children. He was a revolutionary because he was rejected by his earliest experience of society. And so I gave my revolutionary hero Tōru this same insecurity about his place in the world as well as an innate tendency toward revolution because of his experience as a marginalized person in his childhood society. He was a wayfarer not just because he traveled to America, but more deeply because he had never felt at home in his own society as a boy unacknowledged publicly by his father.

We face a very basic choice, to be bitter and resentful about life’s struggles and challenges, or to embrace them and grow from them somehow. Tōru is a hero, not a villain, so his path is growth and not bitterness, but it was important to me to hint at his inner struggle with his feelings about his father and his place in the world while he was busy dashing about saving Japan with Western technology and dirigibles. His stoicism and inability to say much about his feelings is culturally Japanese but is also grounded in his personal experience growing up mocked and having to tough it out in silence.

Masuyo, the lord’s feisty and unconventional daughter, had to be both very Japanese but also have a sound reason for being unconventional within a society that severely limited women’s degrees of freedom. So, poor girl, she lost her mother at birth, and was raised, somewhat irregularly, by her doting father with enough awareness of social rules to be embarrassed when she breaks them, but not embarrassed enough to cease her defiance when she sees the urgency of their cause. Her struggle is that of every woman trying to break out of a woman’s role whether it be in 1850s Japan or the first woman President of the United States—she is constantly in trouble with her society but knows she must persevere. I tried hard to show realistically the constraints she lived within as a woman in nineteenth century Japan but also to show her pressing hard against those constraints as a more modern heroine might. Her personality and character are a composite of vividly remembered girls I was friends with in my kendo club as an exchange student in Japan, girls who struggled mightily against the constraints of their modern Japanese society.

Jiro the blacksmith is probably my favorite character, for unlike earnest noble Tōru, he is irreverent and fun-loving and unconstrained by inner insecurity or respect for outer rules. He is also very Japanese, but the Japanese of the humorous and commoner type. He is also a composite of people I knew in Japan, as are all my characters, from the jovial Lord Tōmatsu and his chilly wife, to cheerful Lord Aya and the scheming Lord Abe. In the case of historical figures, I used research to understand their agendas and tendencies, and then layered on personalities from people I had known well in Japan. For my fictional characters, as described above, I created backstories and then deduced their personalities and psychological needs from those backstories, again layering personalities from people I had known. Finally, I made sure each character had a misbehavior, like Jiro’s irreverence, or Tōru’s conservatism, or Masuyo’s unconventionality, that gets them into trouble with each other and their society. They have all become very real to me, and I look forward to seeing where their next adventures take them. 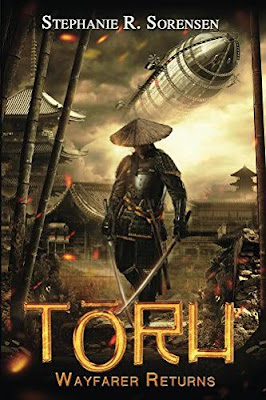 A nation encircled by enemies

A noblewoman with everything to lose

A fisherman with everything to prove and a nation to save.

In Japan of 1852, the peace imposed by the Tokugawa Shoguns has lasted 250 years. Peace has turned to stagnation, however, as commoners grow impoverished and their lords restless. Swords rust. Martial values decay. Foreign barbarians circle the island nation’s closed borders like vultures.

Tōru, a shipwrecked young fisherman rescued by traders and taken to America, defies the Shogun’s ban on returning to Japan, determined to save his homeland from foreign invasion. Can he rouse his countrymen in time? Or will the cruel Shogun carry out his vow to execute all who set foot in Japan after traveling abroad? Armed only with his will, a few books, dirigible plans and dangerous ideas, Tōru must transform the Emperor’s realm before the Black Ships come.

“No, daughter. You are not coming with us.” The daimyō looked down at his daughter’s norimono palanquin.

She signaled for her bearers to lift her up.

They looked to her father for instruction.

“No!” he bellowed, but his voice bore hints of the frustration of a man who knows he is beaten before the battle even begins.

She signaled once again for her bearers to lift her up. Caught between their implacable mistress and her fierce father, the men looked miserable.

“This is no journey for a woman. We will be gone a week. We have to travel through hostile territory. It is the mud season. There are bandits on the road. We have to move swiftly. Your mother would not approve.” Reasons poured out of the daimyō, endless reasons, all of them quite reasonable, at louder and louder volume.

His daughter made no answer. She merely motioned for the third time for her bearers to lift her up.

“Toranosuke! I command you, stay here!”

At her nickname, the girl finally popped her head outside the norimono in a most unladylike manner. She beamed at her father in joyful triumph, confident now in her victory. “Hai! O-tō-sama! I will stay here! For one hour. To make you happy. And then I will follow you, dressed as a man, riding on a horse, wearing your old hakama. If I obey you and stay here for that hour, you will force me to face the mud and the bandits alone. Surely it is better for me to travel under your protection. You cannot make me stay here. And I will follow you, Father. You know I will.” 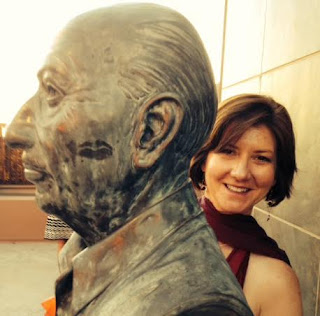 Stephanie Sorensen is a writer based in the Victorian mining town of Leadville, Colorado, where she lives at 10,251 feet with her husband, five chickens, two bantam English game hens and one Cavalier King Charles Spaniel. After a former life in big cities-New York City, Tokyo, Hong Kong, Boston, Mexico City, Atlanta, Los Angeles and Santa Fe-she now enjoys the birdsong and quiet writing time she finds in Leadville. Her first novel draws on her experience living and working in Japan; her next historical novel is set in Mexico where she also lived for several years. As a Leadville local, she likes her Victorian attire spiced with a little neo-Victorian futurism and the biggest bustle possible.

a Rafflecopter giveaway
Posted by Maria at Friday, February 17, 2017