Today we are celebrating the release of HOMETOWN COWBOY by Sara Richardson. This is the first book in her brand new series, Rocky Mountain Riders. You can buy it now and pre-order the next book in the series, Comeback Cowboy! 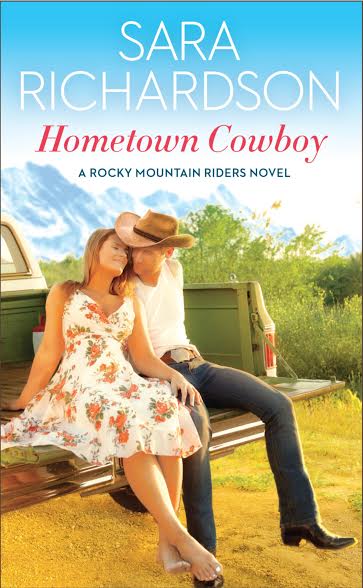 NEVER FALL IN LOVE WITH A COWBOY
Jessa Mae Love is done with relationships. No matter how tempting he might be, she cannot--will not--fall for a man like Lance Cortez. The outrageously handsome cowboy is practically a living legend in Colorado, as famous for riding bulls as he is for breaking hearts. What would a big-time rodeo star like him see in a small-town veterinarian who wears glasses, rescues animals, and cries when watching rom-coms? Turns out, plenty.

Raising bulls, riding the circuit, and looking after his ailing father--Lance never stands still for long. Yet Jessa catches his attention, and the more she tries to resist him, the more he wants her. When she agrees to move to the ranch to keep an eye on Lance's dad, Jessa tells him they have to keep it professional: no flirting, no sweet talk, and definitely no kissing. But with Jessa now living under his roof, that's easier said than done . . . 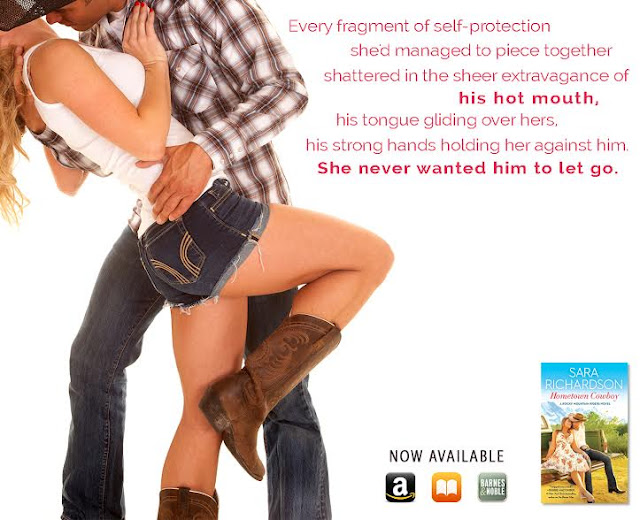 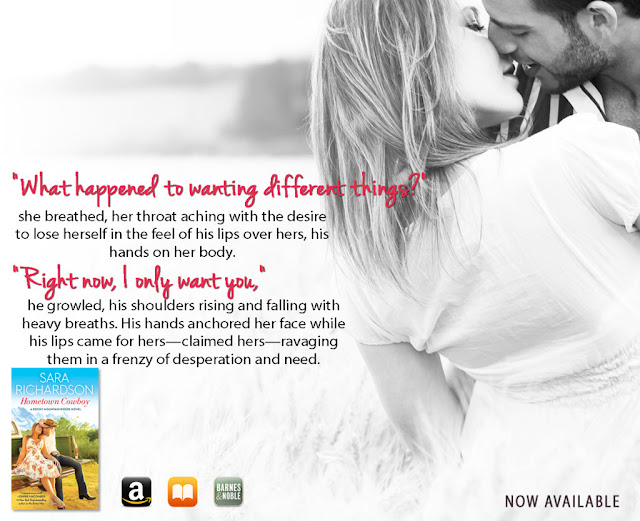 What reviewers are saying about Sara Richardson's novels...
"Charming, witty, and fun. There's no better read. I enjoyed every word!"―Debbie Macomber, #1 New York Times bestselling author on No Better Man

"Richardson's debut packs a powerful emotional punch. [Her] deft characterization creates a hero and heroine who will elicit laughs in some places and tears in others."―Publishers Weekly on No Better Man

"4 stars! Hot! Richardson brings us a modern read set in beautiful Aspen. Her brisk storytelling and the charming, endearing characters set within a solid, engaging plot make this sweet romance shine. A strong and vulnerable Bryce, coupled with a determined, lighthearted Avery, will appeal to readers, especially with their sizzling chemistry. This is a truly delightful read."―RT Book Reviews on No Better Man

"The perfect balance of humor, heart and heat. I couldn't put it down! Sara Richardson will sweep you away."―Christie Craig, New York Times bestselling author on No Better Man

Her eyes fell shut and blocked out everything except for the feel of his mouth, the curve of it, the wet warmth, the way his lips melted into hers. They were firm, but tender, too, so skilled and wonderful it broke open her chest.
Heat flowed in until she was dizzy with it, drowning in it, but just as she lost the power to stand on her own, Lance’s hands moved to her hips and hitched her closer to his body. She let herself lean into him, sliding her hands up his ripped chest, lightly sweeping her fingers over the bandage. God, he was perfection.
His lips moved to her ear, while his fingers carefully brushed her hair out of the way. “I think you’re right,” he breathed. “My life might never be the same.” His tongue traced the ridge of her ear while his heavy breaths grazed her neck and made her legs falter.
He must’ve felt her wobble, because he wrapped his arms around her and crushed her body against his. “Damn, Jessa…” He kissed his way down her neck. “You smell good.”
“Vanilla sugar shower gel,” she gasped, letting her head tilt to the side.
“Mmmm. I like it.” He slid his tongue back up her neck and his lips found hers again. This time he kissed her harder, like he wanted more.
Yes. More. There could be so much more…
Lance shifted, guiding her until her back was against the refrigerator. Things were falling, magnets and papers, but none of that mattered because Lance was pressed against her, his tongue stroking hers, his hips grinding against her body. The feel of him hard and desperate against her sent her heart spiraling. A frantic moan escaped, and Lance smiled against her lips. She let her head fall back so she could draw in a breath, but she hit the refrigerator.
A loud crash froze her. Lance pulled away. Those bottles of Jack Daniel’s that had been on top of the fridge now lay next to their feet.
“At least they didn’t break.” Lance started to laugh but she pressed her hand against his mouth. “It’s not funny! What if your dad—”
“What in god’s name is that racket?” came from down the hall.
“Oh no,” she hissed. “Oh god…”
Lance still had a big silly grin on his face. “It’s nothing, Dad,” he called, but the man came charging around the corner anyway.
Jessa pushed back and pretended to inspect the bandage. “Well, there we go. Everything looks good.” She glanced up and forced a smile, but she’d like to bet he could see the vein in her forehead pulsing. “Hey, Luis. Sorry about the noise. I was bandaging Lance up and we accidentally knocked over the bottles.” Her bright red face had to be a dead giveaway that the whole sentence was a lie. Not to mention her dilated eyes.
“Uh. Thanks, Jessa,” Lance said, reaching past her for his shirt.
“No problem,” she intoned, as if answering a complete stranger. “Next time, don’t wait so long to get it cleaned up.”
A spark smiled in his eyes. “I definitely won’t.”
Whew. She fought the compulsion to fan her face with a towel.
“Guess I should get going then.” Lance clapped his dad’s shoulder on his way out the door. “Night Pops.”
Luis didn’t respond. He simply watched his son leave, then he turned to Jessa. “So nothing’s going on between you two.”
She invoked her laser focus to put away the first aid supplies. “Uh-huh. Nope. Nothing.”
“From what I could tell that was a whole lot of nothing,” Luis muttered as he plodded back down the hall.
That was one way to put it. A whole lot of nothing. 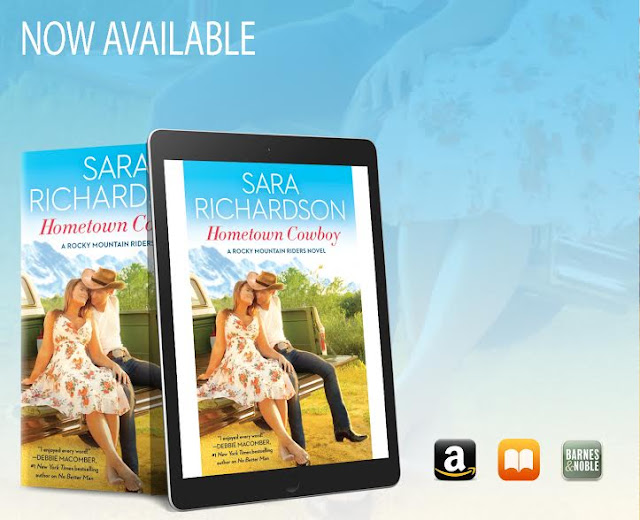 PRE-ORDER THE NEXT BOOK IN THIS SERIES 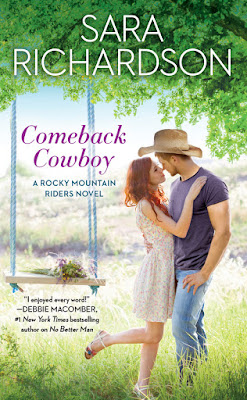 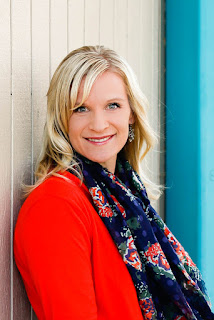 Sara Richardson grew up chasing adventure in Colorado’s rugged mountains. She’s climbed to the top of a 14,000-foot peak at midnight, swam through Class IV rapids, completed her wilderness first-aid certification, and spent seven days at a time tromping through the wilderness with a thirty-pound backpack strapped to her shoulders. Eventually, Sara did the responsible thing and got an education in writing and journalism.

After five years in the corporate writing world, she stopped ignoring the voices in her head and started writing fiction. Now, she uses her experience as a mountain adventure guide to write stories that incorporate adventure with romance. Still indulging her adventurous spirit, Sara lives and plays in Colorado with her saint of a husband and two young sons. Her first contemporary romance, No Better Man, was released by Grand Central forever 2015.