Book Blast & #Giveaway for The Second Time Around by Ella Quinn

Welcome to my stop on the Book Blast, presented by Goddess Fish Promotions, for The Second Time Around by Ella Quinn.  Please leave a comment or question for Ella to let her know you stopped by.  You may enter her tour wide giveaway, where one (1) randomly chosen commenter will be awarded a $10 Amazon/BN GC, by filling out the Rafflecopter form below.  You may follow all of the stops on the tour by clicking on the banner above.  The more stops you visit, the better your odds of winning.  Good Luck! 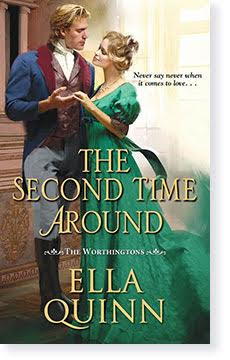 The Second Time Around
By Ella Quinn
The Worthingtons, Book 2.5

Before he died, Patience was the Earl of Worthington’s second wife. So why shouldn’t Patience be allowed a second chance at marriage, too? Of course, finding a new husband was not something the mother of four had ever planned on. But a surprise encounter with her first love has suddenly made the impossible seem possible all over again . . .

It seems like a lifetime ago that Richard, Viscount Wolverton, was halfway around the world, looking for adventure . . . while Patience, at her coming-out, was left with no choice but to take old Worthington’s hand. Richard never forgot the woman whose heart he yearned for—and now that he’s back, he’s not going to let her slip away again . . .

Patience gasped. Not loudly, she was much too self-contained to draw attention to herself. But Richard could feel her pulse jump, and he was pleased that he still had the ability to shake her calm, to make her react to him. He wondered if her old husband had been able to command her attention in the same way. The corners of his lips twitched. Probably not. Whether she knew it or not, she was his and always had been.

If only he hadn’t been such an idiot. Who forgets the year of his beloved’s come out? A young man who had traveled halfway across the world looking for adventure, that was who. By the time he had returned home, it was just days before her marriage to Lord Worthington. He had argued with her father to be able to see her, but it was as if her parents had locked her in the house. When they’d traveled to Town for the wedding, he had followed. However, his pains had been to no avail. Neither her mother nor father was going to let him ruin their plans for Pae. After all, an earl outranked the heir to a viscount. There was also the scandal that would ensue if she broke the betrothal just days before the nuptials. He would not have cared, but he was the only one. Even his parents would have been appalled if Pae jilted Worthington for Richard.

Too late. That is what everyone had told him. But he wasn’t too late now. 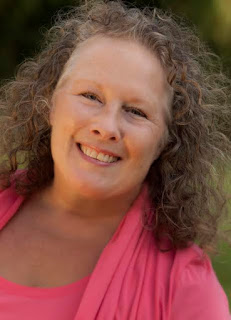 Bestselling author Ella Quinn’s studies and other jobs have always been on the serious side. Reading historical romances, especially Regencies, were her escape. Eventually her love of historical novels led her to start writing them. She has just finished her first series, The Marriage Game, and her new series, The Worthingtons, began in April 2016.

She is married to her wonderful husband of over thirty years. They have a son and two beautiful granddaughters, and a dog. After living in the South Pacific, Central America, North Africa, England and Europe, she and her husband decided to make their dreams come true and are now living on a sailboat cruising the Caribbean and North America. Europe is next!

a Rafflecopter giveaway
Posted by Maria at Tuesday, February 28, 2017