Book Blast & #Giveaway for The Soldier's Woman by Kelly Lyonns

Welcome to my stop on the Book Blast, presented by Goddess Fish Promotions, for The Soldier’s Woman by Kelly Lyonns.  Please leave a comment or question for Kelly to let her kjnow you stopped by.  You may enter her tour wide giveaway, where five (5) randomly chosen commenters will be awarded a digital copy of The Soldier’s Woman, by filling in the Rafflecopter form below.  You may follow all of the stops on the tour by clicking on the banner above, the more stops you visit, the better your odds of winning.  Good Luck! 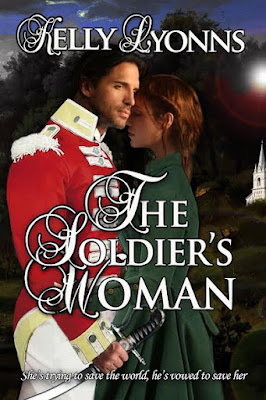 The Soldier’s Woman
By Kelly Lyonns
The Bladewood Legacy, Book 1

It is 1810 somewhere in the chaos of war-ravaged Napoleonic Portugal. Miss Charlotte Everslea, dedicated member of an ancient secretive Guild and skilled paranormal artefacts hunter, has found herself trapped behind enemy lines. Colonel Maximillian Bladewood is used to giving orders and having them obeyed, both on and off the battlefield. But the petite golden-haired hoyden, to whose accidental intervention he owes his life, challenges both his authority and his sanity. Their cross-purposed journey will reach a crossroad where one or both of them will need to compromise.

He was still holding her, and she wasn’t quite sure what to do next. There was a pause as she felt him lean back a little, probably trying to catch a glimpse of her face. It was extremely silly, but despite everything she had already faced, she couldn’t look him in the eye, couldn’t bear him seeing the red puffy proof of her crying.

“I wish I had a handkerchief to offer.” The deep quiet voice above her head paused, “Sadly, mine are with my dress uniform in a supply wagon, somewhere on the other side of this battlefield I should think.”

She was grateful for his attempt to invoke the humour and even a little civility to their situation.

“I most sincerely apologise, Sir.” Heavens above, her voice came out as a wavering snuffle. She could absolutely not look up.

He neither moved nor answered for some long moments. She felt a little trill of something like panic building in her chest. When he did speak, the words were all gentleness, despite the dust roughened rasp.

“It is of no consequence Madam. I think that we find ourselves in an unusual situation.” He cleared his throat before adding quietly, “I have seen strong men break down and weep after a battle. There is no shame in this.”

The little alarm that had been building evaporated. She still stood inside his arms. He had made no attempt to release her, but then neither had she made any sign that she wished it. Suddenly realising she needed to do exactly that, she stiffened in his arms and gave the barest push with her hands. Was it her imagination, or was there a moment of hesitation before he let her go? With an unsettling mix of relief and regret she stepped away, head averted to avoid his gaze. She was glad there was no witness to their strange introduction. What an impression she was making.

“Nevertheless, I apologise for such a display.”

“Please do not berate yourself for such a social lapse. Not here… in this Godless place.” 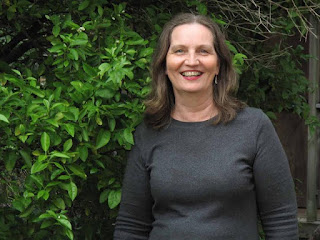 After earning a living as a freelance environmental scientist, writer and editor, Kelly Lyonns has evolved into a creative writer. She cohabitates with three cats, two children and a husband in a house so packed with character even the termites live next door. Burning questions about ecological sustainability and how to tie a Regency bodice, keep her on the internet deep into the night.

Connect with Kelly at:

a Rafflecopter giveaway
Posted by Maria at Thursday, February 09, 2017