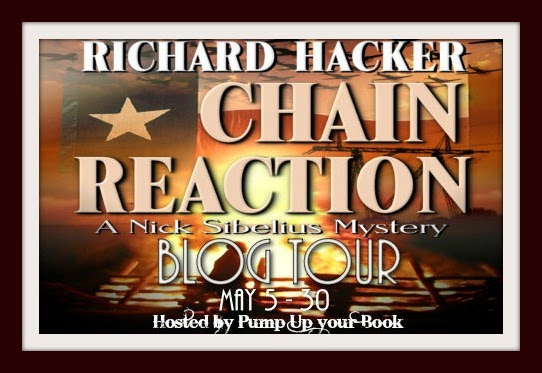 Welcome to my stop on the Pump Up Your Book Virtual Book Tour for Chain Reaction by Richard Hacker.  Please leave a comment or question for Mr. Hacker to let him know you stopped by.  You can enter his tour wide giveaway by filling out the Rafflecopter form below.  You can also follow the rest of his tour here, the more stops you visit, the better your odds of winning.


When Nick and his partner in love and business, Theresa, take on a client caught in a grudge between competitive bass fisherman, they soon discover he has unknowingly entangled himself in a plot by healthcare magnate, Bruce Reynolds, to take over Texas and secede from the Union. Hoping to pass the case to the Texas Rangers, Nick is instead recruited to head the Governor’s special task force. He learns Governor Fran Adamson’s major campaign contributor and secret lover, Reynolds, has a plan to resurrect the Republic of Texas.


Faced with Reynolds’ hit woman killing enemies of the Republic and a remotely controlled drone air force destroying strategic targets across the state, Nick and Theresa make a desperate attempt to prevent civil war, the destruction of the Governor’s political career, and Dillon’s murder, while keeping their love intact. In his scheme for glory, Bruce Reynolds didn’t plan on Nick Sibelius, who wants the wannabe secessionist to know, when he says don’t screw with Texas, he damned well means it. 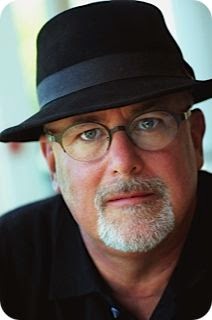 Richard Hacker is the author of CHAIN REACTION, the third installment in the Nick Sibelius crime series. Champagne Books released DIRTY WATER, the next novel in the Nick Sibelius series after TOXIC RELATIONSHIP, in June, 2013. His first novel, TOXIC RELATIONSHIP, released August, 2012 by Champagne Books was a 2011 Writer’s League of Texas (WLT) finalist, where in addition, SHAPER EMERGENCE won best novel in the Science Fiction category.  He is a member of the Pacific Northwest Writers Association.

After living many years in Austin, Texas where he worked as a leadership coach, public speaker and management trainer, he moved with his high school sweetheart to Seattle.  While he misses the big skies of Texas, Richard has grown fond of the Pacific Northwest.  His writing partner, a springer spaniel named Jazz, helps with proofreading and ball fetching.

A wild, madcap thriller filled with zany characters, incompetent bad guys and a private investigator desperate to handle a simple case, Chain Reaction by Richard Hacker, is sure to please anyone who likes having a good laugh while solving a crime.  Set in the state of Texas, where everything seems to be a little over the top, Mr. Hacker’s third installment in the Nick Sibelius series picks up where Dirty Water, the previous installment in the series, left off.  If you haven’t had a chance to read the previous books in the series, this book can be enjoyed on its own, though I would encourage you to at least read Dirty Water first as some of the relationships in that book get carried over in this installment.

A private investigator who just wants to make a comfortable living, Nick Sibelius always seems to find himself in deep water.  What starts out as a simple adventure in sailing with business partner, and new girlfriend, Theresa, soon spirals into a case involving the governor and a group of militant minded men determined to give the “Republic of Texas” it’s independence from the United States.  Determined to keep their client alive, and stay safe, Nick and Theresa soon find themselves racing the clock with an unexpected ally at their side.  Will the state of Texas recover from their latest adventure?

Continuing to develop Nick’s character, Mr. Hacker, gives us a chance to continue seeing what really makes Nick tick; we see his strengths, his weaknesses and his fears.  While Nick claims he would love having a simple case of infidelity to solve, the truth is he thrives on the danger and action he finds himself in, even though he wants to keep Theresa out of the danger.  Nick’s toughest lesson will become learning to balance his need to keep Theresa safe, while acknowledging her rights as his full investigative partner.

Mr. Hacker does a good job developing the secondary characters and I especially enjoyed getting to watch Theresa and Nick’s relationship continue to develop.  I also enjoyed getting to see Alice, their office assistant, and Governor Fran,  once again.  The villains in this installment may even be crazier than the ones Nick has had to deal with before.

Will Nick and Theresa solve the case before the state of Texas goes up in Smoke? You’ll have to read Chain Reaction to find out.  I enjoyed it and look forward to seeing what happens to them next.

Richard Hacker is giving away (2) 3 ebook sets of his Nick Sibelius series!


a Rafflecopter giveaway
Posted by Maria at Wednesday, May 14, 2014