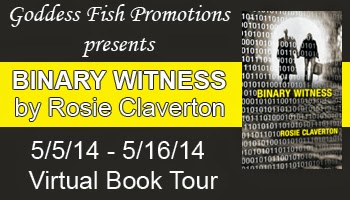 Welcome to my stop on the Goddess Fish Virtual Book Tour for Binary Witness by Rosie Claverton.  Please leave a comment or question for Ms. Claverton to let her know you stopped by.  You can enter her tour wide giveaway by filling out the Raffflecopter form below.  You can also follow the rest of her tour here, the more stops you visit, the better your odds of winning. 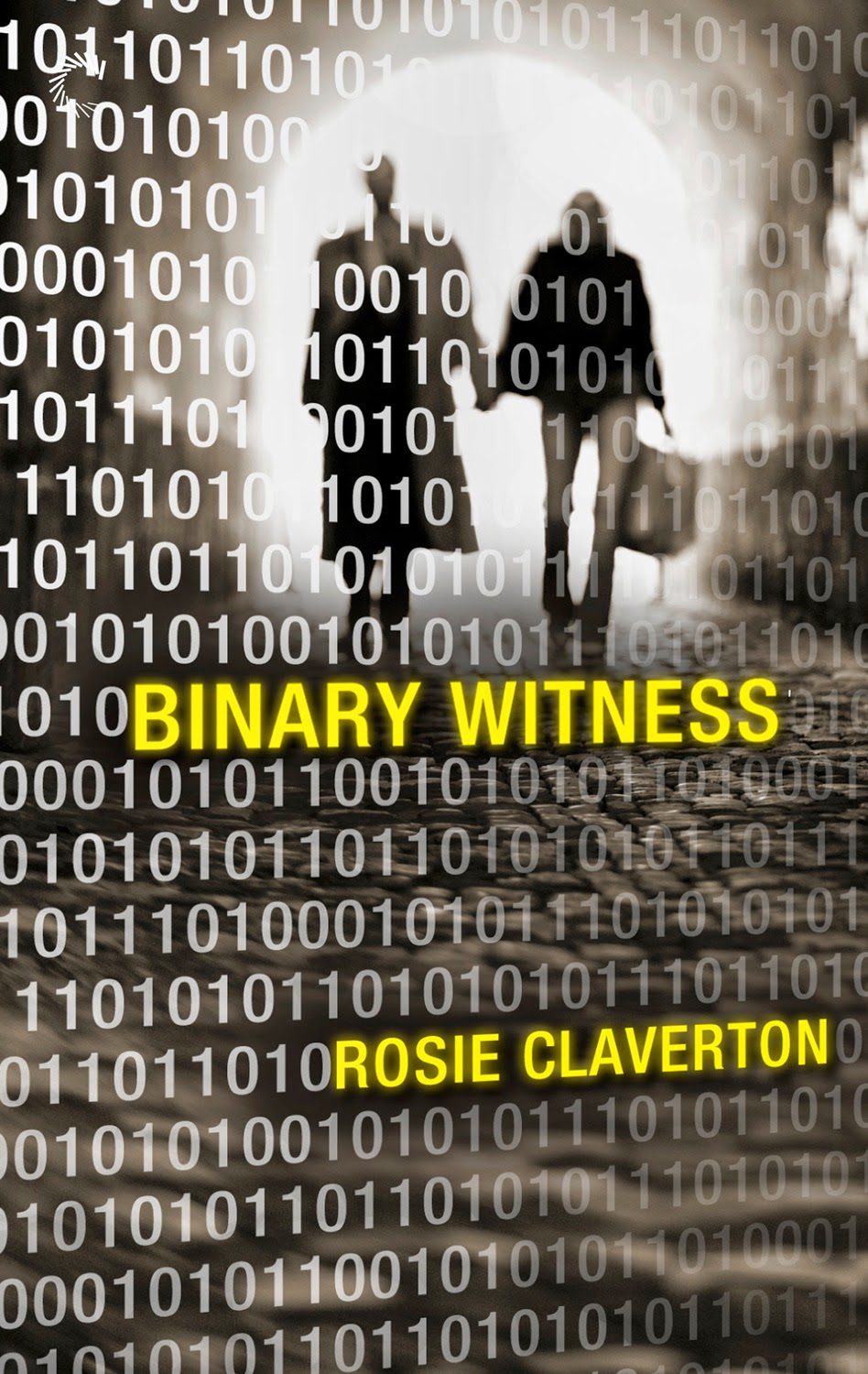 Police detectives rely on Amy Lane to track the digital debris of their most elusive criminals--when she's not in the throes of a panic attack. After two students disappear in Cardiff, Amy uncovers photographic evidence that they've been murdered. From the safety of her computer, she looks through the city's digital eyes to trace the steps of a killer.

Amy's investigation requires footwork, however, and the agoraphobic genius can't hack it alone. She turns to her newly-hired cleaner, ex-con Jason Carr. Jason is fascinated by both Amy and the work, and can't refuse even when she sends him into situations that risk returning him to prison.

The killer strikes again and again, and Amy and Jason are the only investigators closing in on him. But Amy's psyche is cracking under the strain, and Jason's past is catching up with him. To stop the next murder, they must hold their unconventional partnership together at any cost.

The air was stale, like the old attic at his nan’s house. Beneath his feet, the carpet was dusty and covered in what looked like wood chippings. The hallway opened out to the left to reveal the living room, with decent furniture gone bad, dirty and worn.

“Hello?” Jason ventured farther into the flat and tried to get his heart rate down. And then he saw her.

The first impression he had was of metal—three flatscreen monitors, surrounded by computer towers and metal boxes, two keyboards, and wires taped haphazardly to the marked grey walls. Before this shrine to technology, a young woman sat in a high-backed office chair, typing on one of the keyboards. She was slight, drowning in loose casual clothes that had seen better days. Her hair was long, thick with grease and tied in a rough ponytail, and her skin was sallow, as if she hadn’t seen the sun or a steak for several weeks. She was also steadfastly ignoring him.

“So…um…where do you want me to start?” Jason said with as much cheer as he could muster. Her fingers never slowed on the keys, typing faster than he could keep up with, adding to the random words strung together with symbols on her computer screen. “Hello? Can you hear me?”

“Do what you like.” The voice was barely audible, a cracked whisper that only just reached him over the clacking keys. She sounded rusty, as if she only spoke twice a week, and he decided he was unlikely to get any further conversation out of her. No wonder her sister was in Australia. 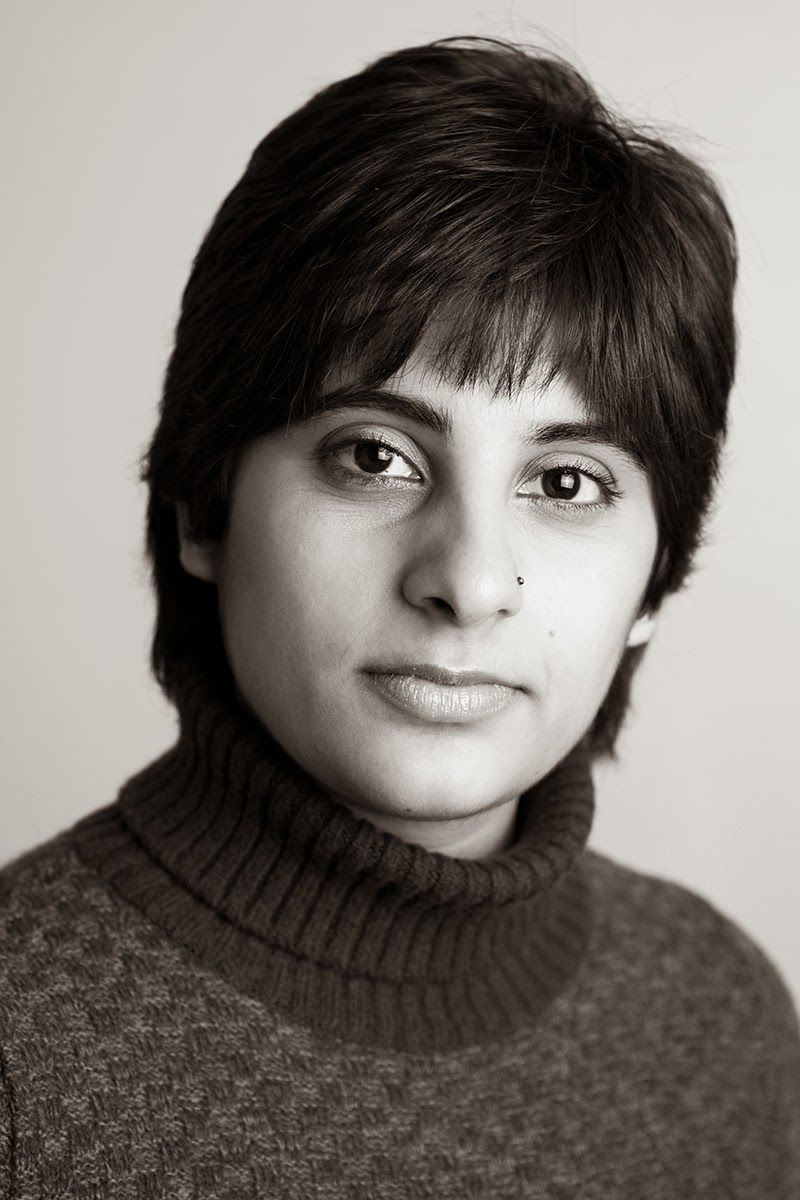 Rosie Claverton grew up in Devon, daughter to a Sri Lankan father and a Norfolk mother, surrounded by folk mythology and surly sheep. She moved to Cardiff to study Medicine and adopted Wales as her home. Her short film "Dragon Chasers" aired on BBC Wales in Autumn 2012. Her debut novel Binary Witness is due for publication by Carina Press in 2014. Currently exiled to London, she lives with her journalist husband and their pet hedgehog.

Don't forget to leave a comment or question for Ms. Claverton to let her know you stopped by.  You can enter her tour wide giveaway by filling out the Raffflecopter form below.  You can also follow the rest of her tour here, the more stops you visit, the better your odds of winning.
Posted by Maria at Thursday, May 08, 2014