Welcome to my stop on the Great Escapes Virtual Book Tour for Lethal Lily by Joyce and Jim Lavene.  Please leave a comment or question for the authors to let them know you stopped by.  You can enter their tour wide giveaway by filling out the Rafflecopter form below.  You can also follow the rest of their tour here, the more stops you visit, the better your odds of winning.  My review will post later this week.

Why botanical poisons?  By Joyce Lavene

When Jim and I first got the call from our agent that Berkley Prime Crime was looking for a garden mystery, we were thrilled to try our hands at it. We’d been avid gardeners for many years, and had become Master Gardeners when we’d lived in Minnesota.

The only thing Berkley didn’t say was what they wanted to see in the mystery – besides gardening. The sleuth could have been anyone we wanted. She could have solved crime in any way we chose.

We chose to make Peggy Lee a botanist and a garden shop owner because we thought she’d be well-rounded. She knew about plants and gardening. Also, she knew a lot about the language of flowers.

But we wanted to her to have something all her own. There were other garden mysteries out there. We wanted Peggy to solve mysteries related to her field. The first step was to have her specialty be botanical poisons.

Botanical poisons are plant-based poisons. They can be anything from pesticides to poisonous plants. They aren’t always lethal to humans. Some can be insecticides that are deadly to bugs.

Thousands of people accidentally poison themselves each year with plant poisons from the oleander or the hyacinth, or the azalea. Peggy would investigate cases where people were intentionally killed with plant poison. There was a huge array of plants that could be used and hundreds of ways to use them – through inhalation, injection, taste, or touch.
Peggy was on her way!

We still enjoy writing Peggy’s stories because she’s such a down-to-earth person who has such a love of plants and people. Lethal Lily is her eighth book in the series, but she is still out there, getting into trouble, and trying to do the right thing. As long as there are readers who want her, we hope to keep Peggy investigating botanical poisons! 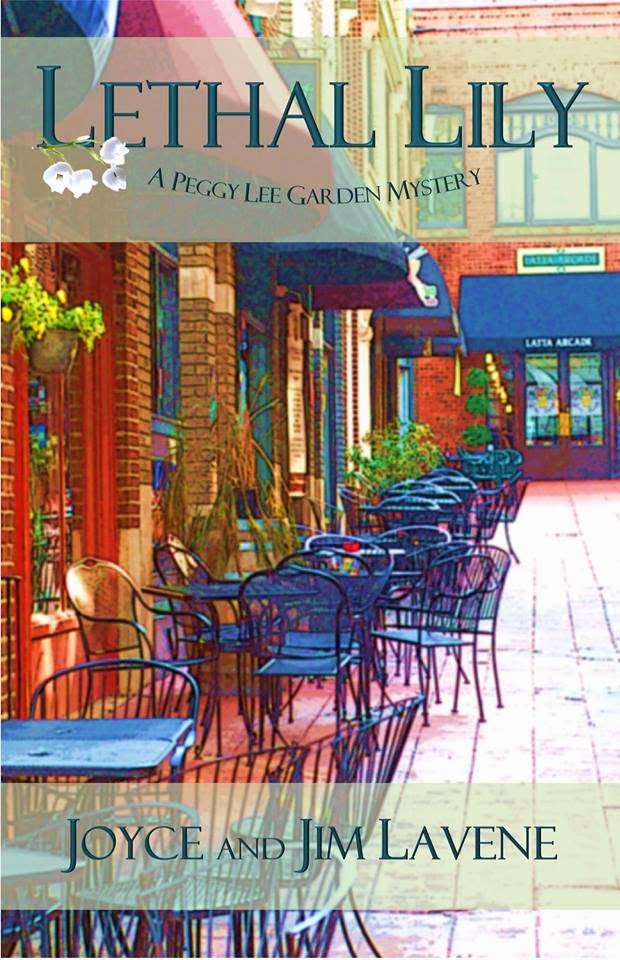 By Joyce and Jim Lavene

Part-time garden shop owner/part-time forensic botanist, Peggy Lee is trying to discover if the death of Ann Fletcher 20 years ago was an accident – or foul play. In return, she hopes to receive more information about her first husband’s death. She knows John Lee was murdered, but questions have arisen as to why he was killed.

She is working with a private detective who stumbles across his own feet, but her Internet friend, Nightflyer, says that Harry Fletcher has the answers. When Harry is murdered by convallatoxin, from the lily of the valley plant, Peggy begins to understand her role in everything. Now she has to stay alive long enough to prove her theories – and keep her son, Paul out of trouble too!

It was after midnight. Peggy Lee had been waiting in the dark parking lot of the Tri-State Mini Storage for more than an hour.

Since she was trying to keep a low profile, she hadn’t looked at her phone or listened to music. There was still a light in the mini storage office. She knew someone was working.

A sign flapped in the warm breeze that had blown up from a tropical storm churning at the Atlantic coast. She glanced at her watch again for the third time in as many minutes.

Peggy had only met Harry Fletcher a few days ago. They’d both received emails from her online friend, Nightflyer, suggesting they should work together.

A friend of mine is investigating an old murder in Charlotte, and might call on you for help. I sent him to you because he knows part of the puzzle surrounding John’s death. I’ll speak with you when I can. ~ Nightflyer

The note had caught her attention—and held it. It had only been a few months since she’d learned that her former husband, John Lee, may have been deliberately murdered. She still wasn’t sure it was true, but she decided it couldn’t hurt to check into it.

John had been a Charlotte, North Carolina police detective when he’d been killed more than a decade ago. He’d been called out on a domestic abuse situation that he shouldn’t even have responded to. But it was on his way home, and he’d gone willingly because he was needed.

The call went bad when the man, who’d been shooting at his wife’s boyfriend, decided to shoot at the police. He’d escaped in the gunfight that had ensued, but John had been killed. The shooter was never found. John’s partner had been at Peggy’s door a few minutes later with the news.

Peggy pushed the thoughts of that night out of her head. It was a long time ago, but it still haunted her. She couldn’t let herself get trapped in the past if she wanted to know what really happened to John.

Her phone rang—startling her. She almost dropped it. “Yes?”

“I found the storage unit,” Harry Fletcher whispered. “I forgot the bolt cutters on the floor of the car. Can you bring them? I’m at Unit 34.”

She agreed to do it, and sighed. The man was terminally careless. Just in the short time she’d known him, he was always dropping something, or forgetting something. She wondered how he’d managed to stay alive while he was working as a private detective.

Harry said he’d been working as an informant for the FBI when John was killed. They’d talked about it over tea in a sunlit atrium high above downtown Charlotte, with exotic lilies perfuming the air, and fleet-footed waiters continually checking their cups.

She hadn’t wanted to bring him to her house—it was better if she was the only one who knew about it. If her son, Paul, knew she was involved in anything like this, he’d be furious. Worse, it could ruin his life. His peace had been hard won after John’s death. He’d struggled with the knowledge that no one had been arrested in the case, eventually becoming a police officer himself.

Paul had always said there was something wrong about John’s shooting. It looked as though he might be right. 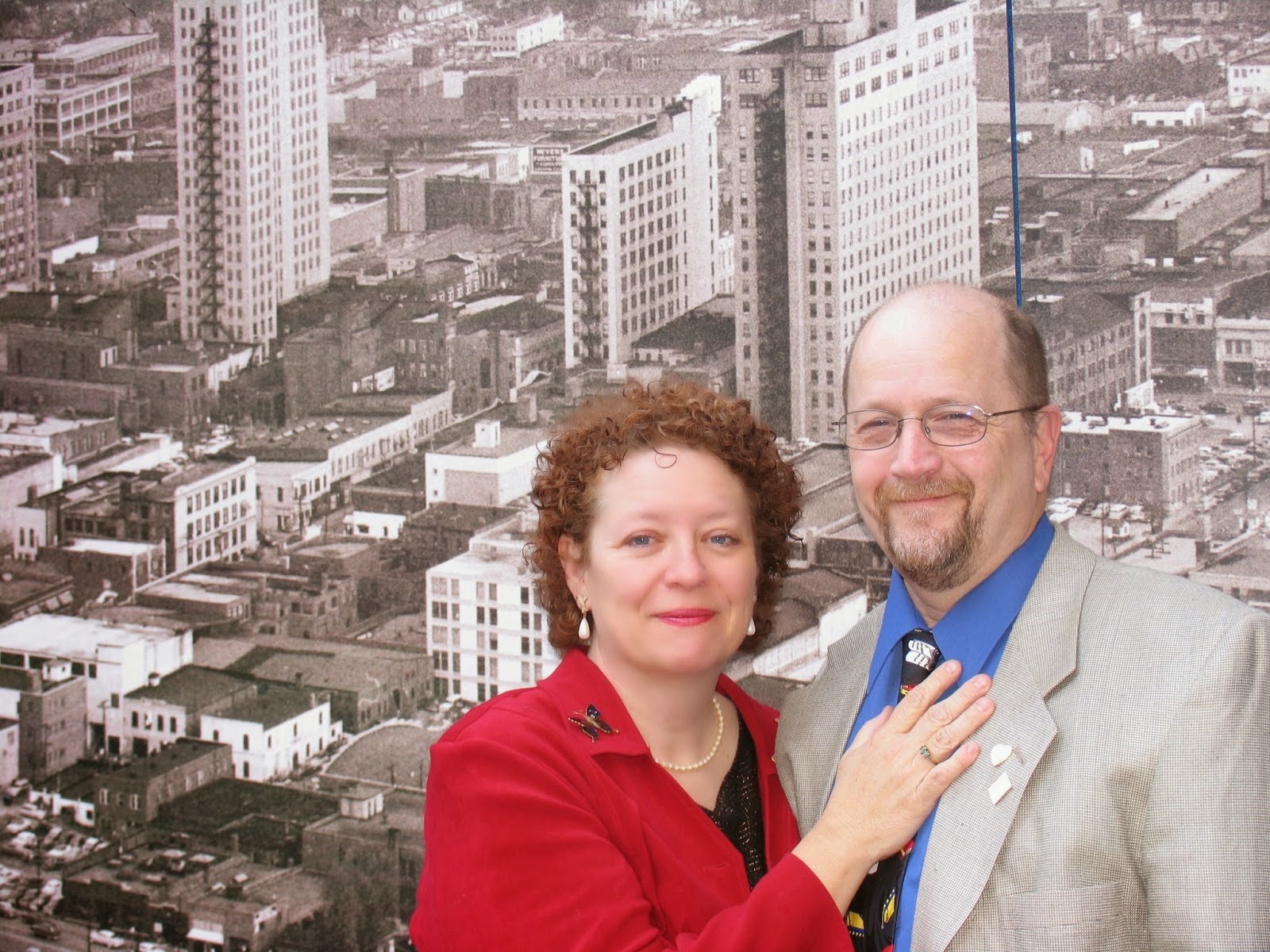 Joyce and Jim Lavene write award-winning, bestselling mystery fiction as themselves, J.J. Cook, and Ellie Grant. They have written and published more than 70 novels for Harlequin, Berkley, Amazon, and Gallery Books along with hundreds of non-fiction articles for national and regional publications. They live in rural North Carolina with their family.

a Rafflecopter giveaway
Posted by Maria at Wednesday, May 14, 2014