Welcome to my stop on the Bewitching Book Tour for The Lost and Broken Realm by Chris M. Arnone.  Please leave a comment or question for Mr. Ansone to let him know you stopped by.  You can enter his tour wide giveaway by filling out the Rafflecopter form below. 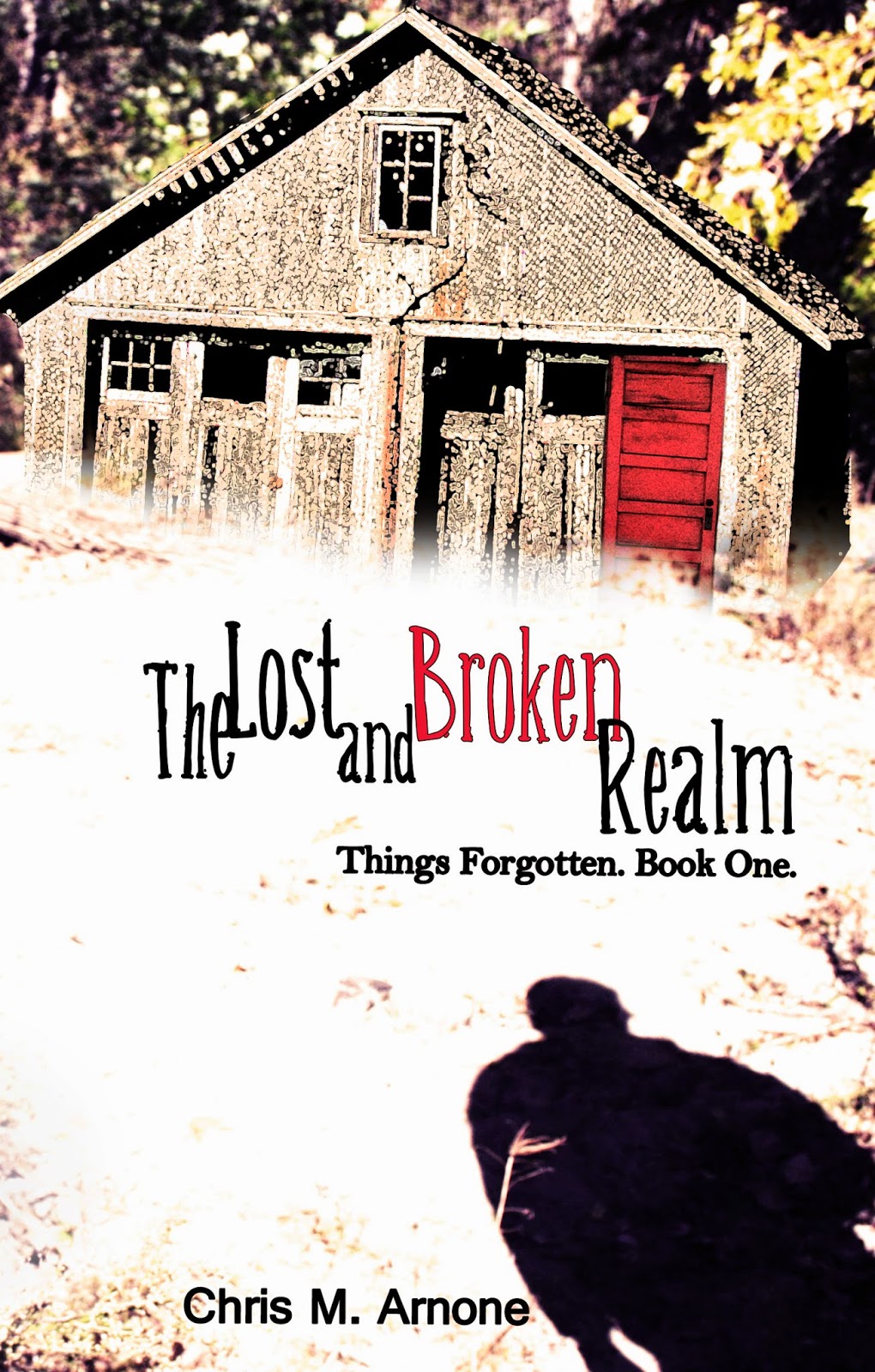 Gabriel Drake had royally fouled up his life. Before his wife died, he was wealthy, respected, and loved. He pissed away the small fortune he and his wife built, drove away his friends, alienated his family, and even took a few precarious steps on the wrong side of the law. He lost his way. The world had forgotten the man he was, and then a head-on collision between his Jeep and a tree changed everything.

Death would have been easier. Instead, he’s woken up in a strange place where all the lost and forgotten things and people of our world go to rest. The laws of physics seem to be driven more by magic than logic. Cats fly and talk into his mind. He’s in a place where real power has been trampled under the foot of a maniacal emperor, and Gabriel alone has the power to free these forgotten people from the emperor’s iron grip. Which will Gabriel save: these lost and broken people, or his own shattered life?

The expansive cave was filled with statues. Gabriel was immediately reminded of the terracotta army in China, row after row of warriors guarding the tombs of ancient Chinese emperors, but these weren’t warriors. They weren’t distinctly Chinese, either. They were cyclopean; that was the first thing Gabriel noticed. Rather than two equally distanced eyes, each statue had one large eye right above the nose.

Unlike those Chinese statues, these weren’t uniform, either. Different bodies, faces, attire, genders, and ages of Cyclops made up the horde of stone figures. Dread began to creep back up Gabriel’s spine as he saw something they all had in common other than their lack of depth perception: every carved face was locked eternally in an expression of fear. Stout warriors crouched, hiding their faces. Women with horrified looks stood guarding their children. Gabriel wondered what foul mind could have sculpted such horrors over and over again.

“What is this?” Gabriel asked in a hush, frightened voice.

“I don’t know. I’ve never even heard of this place,” Anansi responded. For the first time since Gabriel had met the manticore, he heard and felt doubt and fear coming from the creature. Zhiyan kept staring at the ground, impassive, as Finkle Prime led him along.

“Who is here?” said a voice from the darkness. It sounded like a young woman, with a bright, luscious voice. Something was amiss with it, though Gabriel couldn’t figure out exactly what.

“Who is that?” Gabriel asked Anansi.

“I asked you first, mortal,” The voice said playfully. Gabriel realized what was wrong. The ‘s’ sounds were extended, like Cobra Commander in G.I. Joe, or like a snake using a human voice. Gabriel couldn’t figure out where it was coming from. It wasn’t in his head. He’d heard enough telepathy to know the difference, but this woman’s voice seemed to bounce and echo around the cave and off the statues that filled it.

“Gabriel. My name is Gabriel. Who are you?” He asked, trying to keep his voice steady.

“Gabriel. So kind of you to visit. No one comes to visit anymore. Zhiyan, he keeps them from me. Now here he is, marching to his death, how fitting,” She said happily.

“Prime, halt,” Gabriel said. The big clockwork man stopped and Gabriel saw Zhiyan with his head still bowed, but his eyes were closed tightly and a small smile crept over his face.

“Oh, shit,” Anansi said, suddenly angry. “Zhiyan, if we live through this, I hope the council draws and quarters your giant ass.”

“What is it?” Gabriel asked nervously.

“Gorgons? Monsters like Medusa?” Gabriel asked, half in disbelief, half in growing panic. His mind raced. He tried to think of Medusa’s sisters, but the monster didn’t give him time to remember them.

“What do you know of my sister? She was no monster. She was a sweet, innocent girl. Raped and then villainized. No, she was no monster,” Ptolema said, her voice smooth as silk.

“Don’t look her in the eyes!” Anansi suddenly screamed telepathically. He almost didn’t say it in time.

“I am the monster,” She said, her voice dripping with venom. Out of the corner of his eye, Gabriel saw a woman come out of the shadows and into view. One moment later, and he would have looked at her squarely. Instead, he looked several feet to the side of her, taking in her form using his peripheral vision. She was tall as a man, a bit taller than Gabriel from what he could tell, and she wore a ragged red dress that came almost to the ground. Rather than legs, Gabriel saw a mass of writhing snakes skimming along the ground. She tried to dart directly into Gabriel’s view, faster than he expected, but he dropped his eyes fully to the ground. Her arms gleamed a brilliant, shining gold color, and reflected light from Prime’s shoulder lamps all around the cave. Gabriel wondered if her hair was made of venomous snakes like the stories told, but he didn’t chance looking up near her face.

“Why do you look away, Gabriel? Why do you not meet my gaze? Am I not beautiful?” Ptolema asked, almost pouting.

“No thanks. I’d rather not turn to stone today,” Gabriel said, his voice shaking. He remembered the stories of Medusa, how she turned men to stone with her gaze, and how Perseus destroyed her with a mirrored shield.

“There are worse ways to die,” Ptolema said, all the playfulness, seduction, and beauty suddenly gone from her voice. She was deadly serious. And then she was moving. She was fast, so much faster than Gabriel could have imagined. He leapt out of her way, but only just in time. He felt the wind move past him and smelled her, a waft of rotting flesh and dry snakeskin.

Gabriel scrabbled along the cave floor to get away from the horrifying woman. Tiny snake heads snapped at the air behind his heels. He looked all around for something, anything to fight with, to hide behind, anything.

“Oh, get up, little man. Die on your feet,” Ptolema balked, and then laughed at him, but only briefly. A massive shadow suddenly came over Gabriel, blocking out the light from Prime’s lamps. Fearful of looking up, he looked around and saw a massive paw, like one belonging to a lion that was three times larger than it should have been. A deafening roar filled his ears and Gabriel crawled out from under the creature, seemingly unnoticed. It was almost a giant lion, except it had two equally huge red feathered wings and the tail of a scorpion, its stinger poised to strike some thirty feet up in the air. 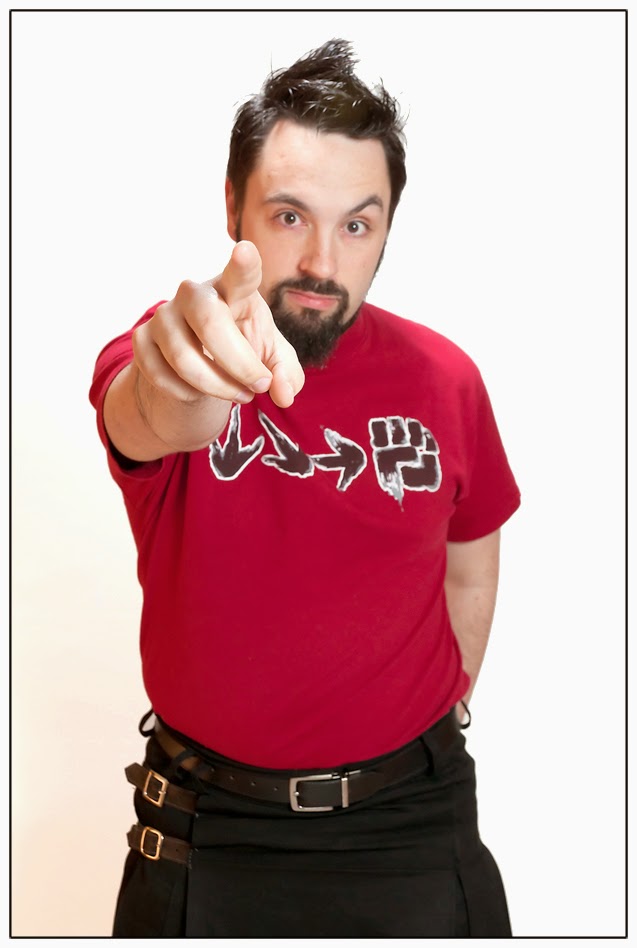 Chris grew up in Independence, MO. He attended college at Truman State University where he pursued his loves of theater, music, and the written word. Now, he makes his home in Kansas City, MO with his wife Christy and their four cats.

Aside from writing feverishly, he is an avid supporter of the Kansas City burlesque, performance, and arts communities. He is an occasional emcee, outspoken supporter of LGBTQ equality, and King of the Nerds. No, you didn't vote for him; that's why he's king, not president.

May 5 Spotlight and review
The Bookie Monster
http://bookie-monster.com/

May 13 Interview
The Creatively Green Write at Home Mom
www.creativelygreen.blogspot.com

May 16 Spotlight
Queen of All She Reads.
http://queenofallshereads.blogspot.com/

May 19 Spotlight
Booklover Sue
http://bookloversue.blogspot.com/
Posted by Maria at Friday, May 16, 2014