Welcome to my stop on Brenda Novak's Virtual Book Tour for When Summer Comes, the third book in her Whiskey Creek series.  Please leave a comment or question for Brenda below to let her know you stopped by.  You can also enter my Rafflecopter Giveaway for  either a Kindle or Print copy below.

She needs a liver transplant. But her doctors warn that, in her case, the chances of finding a compatible donor aren’t good. Determined to spend whatever time  she has left on her own terms, she keeps the diagnosis to herself and moves out to her late grandparents’ farm. She’s always wanted to live there. But the farm hasn’t been worked in years and she begins to fear it’s too much, she’ll have to return to town.

One night, a stranger comes knocking at her door…
He’s an attractive and mysterious drifter by the name of Levi McCloud who offers to trade work for a few nights’ shelter. Callie figures she doesn’t have anything to lose. He needs a place to stay until he can fix his motorcycle; she needs an extra pair of hands. The arrangement seems ideal until what was supposed to be temporary starts to look more and more permanent. Then she realizes she does have something to lose — her heart. And, although he doesn’t yet know it, Levi stands to lose even more.

Panic turned Callie’s knees to water as she felt the raw power of Levi’s quick, sure movements. She opened her mouth to scream but couldn’t draw in enough air.
For the first time, she was afraid of him. Really afraid. In that moment, she knew without a doubt that he could do anything he wanted to her, and that, despite her diagnosis, she still cared.
The fear didn’t last, however. As soon as he realized it was her, he eased his hold enough to turn her in his arms. “I’m sorry,” he murmured. “I hope...I hope I didn’t hurt you. I didn’t know...”
His words fell off, but she understood. He hadn’t known it was her. She should’ve announced herself. She would have, except that she’d been waiting to get close enough to touch his arm, in case he was sleeping. “It’s okay,” she said. “I...I shouldn’t have surprised you.”
“What are you doing out here?”
He released her but she couldn’t let go of him. She was still trying to overcome the effects of receiving such a fright, worried that she might crumble to the ground. “I-I wanted to see if you’d come inside.”
“Why?”
His deep voice rumbled in her ear, but he must have felt her shaking because his hands no longer hung at his sides. They were sliding up her back. She could feel the warmth his splayed fingers provided as he drew her into a solid embrace that reassured her but did nothing to slow her galloping heart.
Instinctively, she turned her cheek against the soft cotton of his T-shirt. Don’t read anything into this. He’s just being kind. Such contact was normal, given her reaction. But she couldn’t deny that the chemistry between them had suddenly changed. She liked the feel of his firm chest, the security she felt in the circle of his arms, but there was also a sexual element—probably because he wasn’t completely dressed. She’d already felt the band of his briefs, the crisp hair on his legs as he brushed up against her.
She swallowed hard as his hands settled between her shoulder blades. “I couldn’t sleep.”
“Why not?”
“I was...I was worried that maybe Denny and his fool of a friend would come back and cause trouble.”
“They might. But they’re the kind of trouble I can handle.” 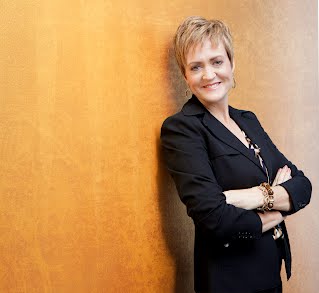 Brenda Novak
New York Times & USA Today Bestselling Author Brenda Novak is the author of more than forty-five books. A three-time Rita nominee, she has won many awards, including the National Reader’s Choice, the Bookseller’s Best, the Book Buyer’s Best, the Daphne, and the Holt Medallion. She also runs an annual on-line auction for diabetes research every May at www.brendanovak.com (her youngest son has this disease). To date, she’s raised over $1.6 million. Come meet the long-time friends who have made Whiskey Creek the “Heart of Gold Country” with WHEN WE TOUCH, WHEN LIGHTNING STRIKES, WHEN SNOW FALLS and WHEN SUMMER COMES.

Would you take a chance on finding love if you know you only have six months to live?  That's the question Brenda Novak asks and answers in When Summer Comes, the third book in her Whiskey Creek series set in California gold country.  Well developed characters, good dialogue and plenty of emotional angst kept me turning the pages on Ms. Novak's tale of two damaged people who find each other at the lowest point in their lives.  While When Summer Comes is a part of a series, and is the third book to boot, I was able to read and enjoy this contemporary romance all on its own.

Photographer Callie Vanetta has loving parents, a successful business and a handful of great friends.  Feeling tired and run down, Callie never expected to discover she had liver disease.  Told without a transplant, which didn't look hopeful, she would only have six months to live, Callie moves out of town and moves into her deceased grandparents home.  Knowing she will only live through the summer, Callie wants to live on her own terms and remember the good days from her childhood.  She never thought she'd end up falling in love with a drifter she gives temporary shelter.

Former soldier, and current vagrant, Levi McCloud is running away from his life.  Riding his motorcycle across the country gives him the freedom and space to outrun his demons.  Finding himself the victim of a vicious dog attack, and needing temporary shelter, Levi never counted on meeting the woman who would not only change his life but give him a reason to live. 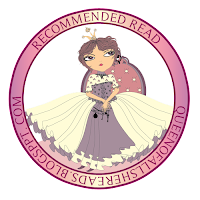 The scenes between Callie and Levi are really well written; they both have deep, dark secrets and are suffering from both physical and emotional pain.  While Callie had a great childhood, and was content with her life, she's depressed and a little angry about her illness and impending death.  While she's accepted it to a point, she's aware of the pain her passing will lead to in both her parents and friend's lives and worries they'll want to take over what little time she has left if she tells them about her illness.  Meanwhile Levi's childhood has left him with many emotional scars which he's carried into adulthood and never addressed.  His inability to trust others makes it difficult for him to accept any kind of favor, so he insists on helping Callie around the ranch.  Neither one was looking for love - but they found it in each other.  Ms. Novak does a really good job developing these characters, addressing their emotional issues and gives us just the right amount of smexy scenes, a romance reader craves.

The secondary characters in this story, from Callie's friends to the town sheriff - who doesn't like vagrants and kinda has a thing for Callie, all play an important part in Callie's life and in her future.  Ms. Novak even gives us two villains, who happen to be outsiders temporarily living in the area, which remind us that even in small, almost perfect towns, violence and evil make the occasional visit.  Ms. Novak even gives the small town of Whiskey Creek it's own personality, it's a character all on it's own.

Will Callie and Levi's love survive both her future and his past?  You'll have to read When Summer Comes to find out.  It's the perfect light romance for a summer day.  On a side note, this is the first romance I've read written by Ms. Novak and I can't wait to go back and read the first two books in this series. 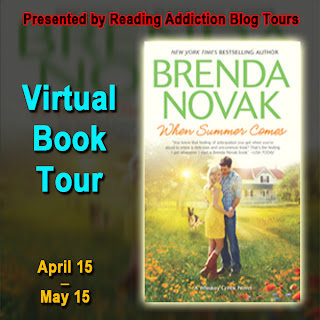