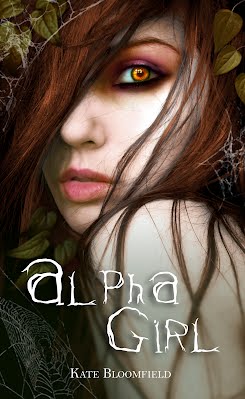 Best-selling and independent Australian author, Kate Bloomfield, has successfully made a name for herself in the world of self-publishing at just twenty-three years old.  Her newest and most precious book yet, Alpha Girl, is a controversial Paranormal Romance between a student and a teacher.  A book not for those easily offended.

Seventeen year old Rose Goldman is highly unpopular in the little town of Halfway.  Ever since the "attack" when she was a little girl, people and animals have been afraid of her.  She gets bullied in school, and called "wet dog" because of the way she smells, despite being extremely hygienic.

However, life takes a turn when a new teacher starts at Halfway High. Mr. Stone, the quirky and charismatic English teacher is twice Rose's age, but she feels an unexplainable pull towards him from day one. Despite her better judgement, Rose pursues a friendship with Mr. Stone, who seems unable to stay away from her.

What is pulling this unlikely pair together?

Alpha Girl by Kate Bloomfield is an interesting mix between a coming of age tale and a paranormal romance.  With a likable heroine, a clueless hero and two pretty horrid parents, Ms. Bloomfield’s story grabbed my attention and never let go.  While some parts of the story worked better than others, overall it’s an interesting book.

An awkward seventeen year old girl on the age of adulthood, Rose Goldman is first and foremost a survivor.  At the age of nine, Rose survived an attack by a monster in the woods.  For the last eight years she’s survived indifferent parents going their different ways and headed for a split.

Rose has also managed to survive going to school with classmates who don’t understand her and call her names.  Ms. Bloomfield does a pretty good job developing Rose’s character; she’s independent, loves to read and tries to make the best of her situation, all while harboring a dark secret.  A dark secret that drives Rose to dislike herself.  I admired Rose for her tenacity and her determination to make a better life for herself somehow.

Rose’s life changes drastically with the introduction of Tom Stone, her new English teacher.  While English has always been her best subject, something about Mr. Stone makes Rose determined to do even better.   She’s even attracted to the way he looks and smells.

Returning to teaching after a long absence, Tom Stone has a secret of his own.  Realizing Rose is a bright student, he encourages her to work harder and do better in class.   While he knows he shouldn’t be attracted to one of his students, he can’t help liking Rose or the way she smells.

The scenes between Rose and Tom are at times awkward and uncomfortable.  They both know they should not be attracted to each other.  While Rose is only a few weeks from being eighteen, she’s determined to make their friendly relationship into a romance.  Ms. Bloomfield address the taboo nature of the teacher/student relationship but because of Rose’s home situation, Tom becomes her only real source of emotional support.

The secondary characters were difficult for me to identify with.  I disliked Rose’s parents; they were indifferent, self absorbed and just plain neglectful of their daughter after she survived a horrific attack.   I also didn’t like Rose’s “friends” at school, who didn’t really like her but let her be a part of their group.

When Rose and Tom discover each other’s secret will it lead to happiness or more trouble?  You’ll have to read Alpha Girl to find out.  I look forward to reading what happens to Rose and Tom next.