Welcome to the next stop on the review tour for The Midwife's Revolt by Jodi Daynard.
“A charming, unexpected, and decidedly different view of the Revolutionary War.” —Publishers Weekly

Book Description: The Midwife’s Revolt takes the reader on a journey to the founding days of America. It follows one woman’s path, Lizzie Boylston, from her grieving days of widowhood after Bunker Hill, to her deepening friendship with Abigail Adams and midwifery, and finally to her dangerous work as a spy for the Cause. A novel rich in historical detail, The Midwife’s Revolt opens a window onto the real lives of colonial women. Jodi Daynard’s historical fiction The Midwife’s Revolt has eared a 4.8 out of 5 stars on Amazon and praise from libraries, historical associations and is even featured at The Museum of the American Revolution.


“This humorous, exciting and touching story retells the familiar saga of the Revolutionary War in a stunning new way that feels fresh and alive.” —Kirkus Reviews

As a lover of both history and historical fiction, I was thrilled when I was given the opportunity to read and review Jodi Daynard's The Midwife's Revolt.  While a fictional tale, Ms. Daynard's blending of fictional and real characters, along with fictional and real events, gives us a unique perspective into the lives of women during the American Revolution.  While much has been written about our Founding Fathers, little attention has been paid to the strength, fortitude and sacrifices made by both their wives and the wives of the average soldier.

At the beginning of this book we are introduced to Elizabeth Boylston, a young woman distantly  related to Abigail and John Adams.  The daughter of a gentlewoman, trained in the art of midwifery, and a judge, Elizabeth is attractive, intelligent and somewhat of a liberal thinker.    Also taught the art of midwifery, Elizabeth is a young girl when her mother passes away due to illness.
Left alone for long periods of time, Elizabeth is finally granted a tutor, a man who further instills her love of learning by teaching her to read Latin and Greek, something her father and brother both fear could turn away possible suitors.

Fortunate in her choice of suitors, Elizabeth marries Jeb, a fellow patriotic thinker, and soon finds herself alone on their farm when Jeb heads off to fight in the American Revolution.  While Elizabeth, or "Lizzie", misses her husband terribly, they're both supporters of independence.  Unfortunately Jeb is killed at the battle of Bunker Hill and Elizabeth now finds herself running the farm on her own.  Soon Elizabeth becomes friends with Abigail Adams, another woman considered unusual due to her wit and intelligence.  Realizing she's met a kindred spirit, and fellow believer in a woman's ability to do more than sew and cook, Abigail soon spreads the word about Elizabeth's talents as both a midwife and a homeopathic practitioner. 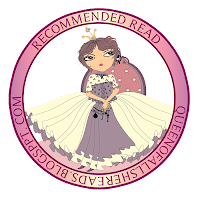 As Elizabeth tends to the woman in town and the neighboring communities, she watches, and comments, on the daily struggles these women go through as they care for their homes and  families, while their men are at war.  A plain spoken woman with a "take charge" attitude, Elizabeth is exactly the kind of woman these women, and our country, needed during the Revolutionary War and formative years.  As the war continues,  Elizabeth and Abigail's friendship flourishes and we see just how remarkable Abigail Adams was.


We also see Elizabeth continuing to place herself in danger, both by traveling during the war to care for her patients and by actively choosing to become involved in the war.  Dressing and masquerading as a man, Elizabeth helps the war effort by going into taverns frequented by British soldier's and reporting on what she manages to overhear.

Ms. Daynard does an excellent job developing both Elizabeth and Abigail's characters.  Portraying them both as ordinary people, Ms. Daynard shows us the different relationships and needs women develop throughout their lives.  Giving us insight into what society expected of women at the time, Ms. Daynard's women also show their  desire for change and freedom by urging John Adams to "Remember the Ladies" when setting up our new government.  They were suffragettes before their time.

Will Elizabeth get caught while spying on the British?  Will she be courageous enough to open her heart to another man's love at the end of the war?  I encourage you to read The Midwife's Revolt.  I sure wish this book had been around when I had to study American history.

About the Author: Jodi Daynard is a writer of fiction, essays, and criticism. Her work has appeared in numerous periodicals, including The New York Times Book Review, The Village Voice, The Paris Review, Agni, New England Review and in several anthologies. She is the author of The Place Within: Portraits of the American Landscape by 20 Contemporary Writers (W. W. Norton). Ms. Daynard’s essays have been nominated for several prizes and mentioned in Best American Essays. She has taught writing at Harvard University, M.I.T., and in the MFA program at Emerson College, and served for seven years as Fiction Editor at Boston Review. She is a member of the National Book Critics Circle, The National Women’s Book Association, and the Author’s Guild. The Midwife’s Revolt is her first novel.


Prizes! And now for the best part, the prizes! Because who doesn't love awesome book themed gifts? Jodi is offering A Kindle Fire to one reader as well as a Artemis Cameo Necklace, an American Flag Folk Art and a $25 Amazon Gift Card. All you have to do is leave a comment and enter the rafflecopter! Of course, there are plenty of other ways to enter to win just by helping spread the word about The Midwife's Revolt. a Rafflecopter giveaway

The Tour: Follow along and read more reviews of The Midwife's Revolt. You can see the full list of participating reviews HERE.


FTC Disclosure: I received a complimentary copy of this book as a part of a review tour in exchange for a fair and honest review