The Daughter of the Sea and the Sky by David Litwack

From the author of There Comes a Prophet and Along the Watchtower comes a new literary journey exploring the clash between reason and faith, and the power of hope and love. 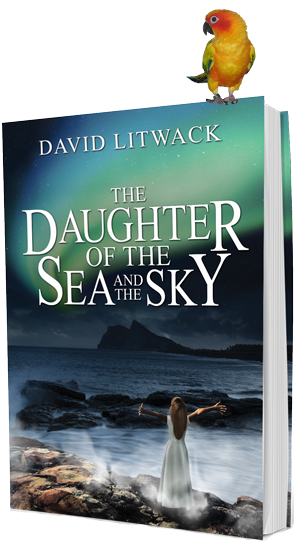 
After centuries of religiously motivated war, the world has been split in two. Now the Blessed Lands are ruled by pure faith, while in the Republic, reason is the guiding light—two different realms, kept apart and at peace by a treaty and an ocean.


Summary: A mysterious nine-year-old from the Blessed Lands sails into the lives of a couple in the Republic, claiming to be the Daughter of the Sea and the Sky. Is she a troubled child longing to return home, or a powerful prophet sent to unravel the fabric of the Republic? The answer will change the lives of all she meets... and perhaps their world as well.


Now, let's celebrate! Tell the world about this great title below and enter to win one of these great prizes:

Jason grabbed the girl just as she began to sink. Despite the buffeting sea, he carried her back to the shore without straining and lay her fragile form on a swath of grass beyond the rocks—a slip of a child no more than nine or ten years old. Plain cotton pants clung to the girl’s legs, and an elaborately embroidered tunic covered her slender frame—the typical garb of the zealots, but other than her clothing, she looked nothing like a zealot. Her skin was light and perfect, unblemished but for a trickle of blood on her arm. Her golden hair hung down to the middle of her back, and her round eyes held the color of the ocean.

Were Helena a believer, she’d have considered this the face of an angel. Jason offered his bottle, but the girl shied away. Helena cradled the child’s head and tilted her chin while he trickled a few drops into her mouth. The girl licked her cracked lips and opened for more. After she’d drunk her fill, she turned to Helena. Her eyes grabbed and held.

“The dream,” she said. “It’s true. I can see it in your eyes.” Helena felt a sudden urge to distract the girl, to disrupt that penetrating gaze.

The girl ignored the question, instead resting her hand on Jason’s forearm. His muscles twitched as if he were unsure whether to linger or jerk away.

“That’s because I’ve been running.”

The girl’s ocean-blue eyes opened wider. “From what?”

He withdrew his arm and flexed his fingers. “Are you from the Blessed Lands?”

“Why would you make such a dangerous voyage alone in such a small boat?”

He waved a hand at the flotsam, still surging in the tide. “But your boat’s destroyed, and it took us to save you.”

“Yes, I suppose.” She looked back out to sea as if expecting to find her boat still afloat. “Then I thank Lord Kanakunai for sparing me and delivering me to kind people who would help.”

“But who are you?” Helena said more insistently.

The girl motioned for more to drink, this time grasping the bottle with both hands and emptying it. When she finished, she sat up and lifted her chin like royalty. “I am Kailani, the daughter of the sea and the sky.”

Using two fingers and lots of white-out, he religiously typed five pages a day throughout college and well into his twenties. Then life intervened. He paused to raise two sons and pursue a career, in the process — and without prior plan — becoming a well-known entrepreneur in the software industry, founding several successful companies. When he found time again to daydream, the urge to write returned.

There Comes a Prophet is his first novel in this new stage of life. His second book, Along the Watchtower, will be available June 2013. And The Daughter of the Sea and the Sky is nearing completion.

David and his wife split their time between Cape Cod, Florida and anywhere else that catches their fancy. He no longer limits himself to five pages a day and is thankful every keystroke for the invention of the word processor.
Posted by Maria at Monday, April 07, 2014