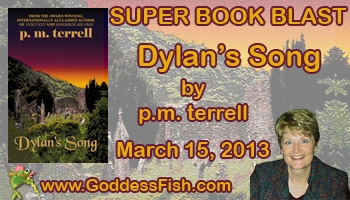 Welcome to my stop on P.M. Terrell's Super Book Blast for Dylan's Song.  Please leave a comment or question below for P.M. to let her know you stopped by.  P.M. will be awarding a Celtic Key Necklace identical to the one Dylan gives to Vicki in Dylan's Song to a randomly drawn commenter during the tour, which looks just like the one below.  You can follow all of her tour stops here, the more often you comment, the better your odds of winning. 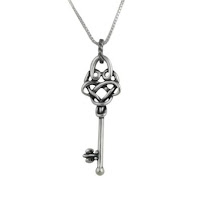 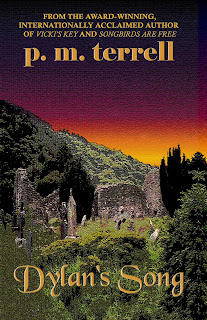 Dylan Maguire returns to his native Ireland with psychic spy Vicki Boyd. Their mission: to locate and extract a CIA Agent who disappeared in Dublin while on the trail of a known terrorist. But when Dylan receives word that his grandmother is dying, he is plunged into a past he thought he’d left behind forever. His mission and the dark secrets he’d sought to keep hidden begin to merge into an underworld that could cost him his life. He must now confront his past demons and the real reason he left Ireland—while Vicki harbors a secret of her own.

Suspense Magazine says, “p.m.terrell’s writing is powerfully written and masterfully suspenseful; you have to hang on for the ride of your life.” Midwest Book Review says the Black Swamp Mysteries series is “page-turning action, unforgettable characters, breathtaking descriptions and unexpected plot twists.” And syndicated reviewer Marcia Freespirit says the series is “riveting, spell-binding, sexy and intense!”


Brenda motioned for her to stand to the side. Then she parted the curtains.

Dylan had come around the back of the house while three men tumbled out of the pickup. They immediately converged at the truck bed, where they picked up pipes and headed toward the front door.

“So, Eoghan,” Dylan called. His voice was loud and heavy as he moved further from the house, drawing the largest man’s attention to him. “What’re wantin’ with me now?”

“What have they got in their hands?” Vicki whispered hoarsely.

“You know what we be wantin’,” the largest one shouted. “We’re here to finish your sorry arse off; what we should’a done a long time ago.”

The men began to separate. They looked like a pack of wolves, Vicki thought, as one moved to Dylan’s left while the other moved to his right. The ringleader, Eoghan, stood his ground directly in front of him.

“He doesn’t stand a chance with the three of them,” Vicki gasped. “Not spread out like they are, not even with the gun.”

“Killin’ me won’t bring ‘er back,” Dylan called. He continued backing away from the house.

“No, but it’ll put you in ’ail that much sooner,” one of the others shouted.

“Kill me and you’ll spend your life in a prison cell, Aidan,” Dylan said to him. “I’m not worth your freedom.”

“Why should we spend our lives in prison for killin’ a man?” the third shouted. “You didn’t spend a day in the clink for killin’ our sister!”

Brenda grabbed her shoulder, forcing her to look her in the face. She hadn’t realized that her sister had disappeared from the window. But now as she stared at her amber eyes burning hot, she began to take in the pistols in each hand. “Slip on a coat and your shoes,” she hissed. “Fast.”

The fourth book in the Black Swamp Mysteries, Dylan's Song by P.M. Terrell, apparently picks up after the events of the previous book, Secrets of a Dangerous Woman, left off.  Not having read any of the previous books in this series, I did feel as if I was at a disadvantage while reading this book.  I wasn't really able to connect with the main characters, Dylan Maguire, Vickie Boyd, and Brenda Carnegie, like I normally do while reading a romantic suspense and that put me at a disadvantage.  That said, I did enjoy reading Dylan's Song and plan to go back and read the first three books in this series and then re- read this book.

Assigned to locate a missing CIA operative, Dylan Maguire is reluctant to return to his native country of Ireland.  Given no choice, he heads to the country of his birth with a two fold plan, locate the missing agent and visit his dying grandmother.  The action begins the minute Dylan gets off the plane and he soon finds himself, and his companions, up to their necks in action.

Psychic spy, and Dylan's girlfriend, Vickie Boyd hasn't been able to get Dylan to open up about his reasons for not wanting to go to Ireland.  Keeping a secret of her own, Vickie wants to locate the missing agent, meet Dylan's family and then return home.  It's only when they get to Ireland and strange things begin to happen, that Vickie begins to understand Dylan's reluctance to return.

Accompanying Dylan and Vickie on their mission is exciting for Brenda, Vickie's sister.  Determined to be helpful, something that doesn't always work out the way she plans, Brenda soon finds herself neck deep in folklore, superstition and psychic phenomena.  Fortunately Vickie is there to help keep them all safe.

Blending historical facts from World War I, World War II and Irish history, Ms. Terrell draws us into complex plot with lots of action, terror and hidden evil.  Dylan, Vickie and Brenda soon find themselves fighting kidnappers, the Irish countryside and the local weather.  Will they locate the agent before one of them takes a fatal bullet?  You'll have to read Dylan's Song to find out. 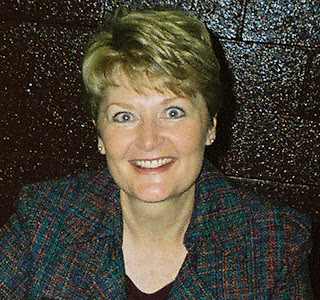 
p.m.terrell is the award-winning, internationally acclaimed author of more than 16 books. Vicki's Key, one of the first books in the Black Swamp Mysteries series, was one of five finalists in the 2012 International Book Awards (Mystery/Suspense) and 2012 USA Best Book Awards (Mystery/Suspense.) River Passage, an historical work based on her ancestor's migration to Fort Nashborough in 1779-1780, won the 2010 Best Fiction & Drama Award. The Nashville (TN) Metropolitan Government Archives determined it to be so historically accurate that they entered the original manuscript into their Archives for future researchers and historians.

Prior to becoming a full-time author in 2002, terrell founded and operated two computer companies in the Washington, DC area. Her clients included the United States Secret Service, CIA, Department of Defense and federal and local law enforcement. Her specialty is in the areas of computer crime and computer intelligence. Her experience in these areas have greatly influenced her books' plots.
She is the co-founder of The Book 'Em Foundation, whose slogan is "Buy a Book and Stop a Crook" and whose mission is to raise awareness of the link between high crime rates and high illiteracy rates. She founded Book 'Em North Carolina Writers Conference and Book Fair, an annual event to raise money to increase literacy and reduce crime.

Don't forget to leave a comment or question below for P.M. to let her know you stopped by.  P.M. will be awarding a Celtic Key Necklace identical to the one Dylan gives to Vicki in Dylan's Song to a randomly drawn commenter during the tour.  You can follow all of her tour stops here, the more often you comment, the better your odds of winning.
Posted by Maria at Friday, March 15, 2013