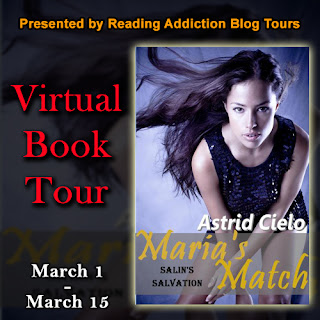 Welcome to the final stop on Astrid Cielo's Virtual Book Tour for Maria's Match, Salin's Salvation #3.  Please make sure to leave a comment or question for Astrid below to let her know you stopped by.  You can fill out the tour wide giveaway by filling out the Rafflecopter form below.

It was love at first sight...

Silvius fell head over boots in love with the feisty Latina nurse the first time he saw her, helping keep a battered woman alive. Having lost everyone he loves to the terrible disease that nearly left their planet extinct, he thinks he has found his mate.

She was instantly attracted to the alien, and that scared her to death...

Maria shared a blissful and life-changing night with Silvius, losing her heart and gaining the baby now growing within her womb. But old hurts won't let her stay and accept that Silvius loves her. So Maria runs-- like she always does.

Little does Maria know that she has finally met her match...

Be advised: Content intended for persons age 18+. Contains violence and scenes of a sexual nature (but not at the same time!).

"Your abuela said it would make you feel better."

Silvius shoved the tea into her hands and Maria smiled as she dropped it onto the hardwood floor, the small teacup smashing into so many pieces and the brown liquid pooling in the shards of ceramic. He looked at the mess and she just knew he wanted to clean it, but he would be otherwise occupied.

Maria pulled him to her, taking his mouth, and Silvius’s hands wrapped around her, pulling her closer to him. She pulled back nibbling on his bottom lip. He stared at her and she giggled as she pulled her shirt off over her head. She looked down, her once flat abdomen now curved and she lost her steam. She wasn't fit and perfect like she'd been on the ship four months ago. She struggled to put her shirt on, but he ripped it from her hands.

His mouth halted her words. His lips were relentless as he plied her mouth for entrance. His hands caressed her abdomen, his tongue gaining entrance on her startled gasp. Maria stiffened and he relaxed his kiss pulling back for pecks that bordered on chaste, before he eased her back against the mattress, his mouth found her ear and he nibbled on the earlobe.

"You are beautiful, mea."

His hands found her slightly rounded abdomen again and he bent to kiss the growing mound.

Maria's Match, the third book in the Salin's Salvation series by Astrid Cielo, is an interesting blend of science fiction and interracial romance.  Not having read the previous two books in the series (Surrender Serenity and Embracing Ember).  I was somewhat at a disadvantage when it came to the world building which takes place in this book.  That aside, Ms. Cielo's writing style is easy to follow and enjoyable.  Her love of both the science fiction and romance genres is easily identifiable within the book.

An alien on Earth, Silvius is a man who's lost everyone he loves.  When he meets Maria, a nurse helping to save the mate of one of his fellow crew mates, he can't deny the instant attraction and lust he feels towards the strange human.  One night of passion assures him she's his mate, only to find her missing the next morning.  Determined to keep what is "his", Silvius pursues her and never intends to let her go.  He just has to convince her that what they have is forever.

A nurse, and secretly an agent of the government, Maria finds herself helping the newly landed aliens.  Attracted to Silvius, a huge red skinned, black haired alien is strange enough on it's own, at lest until their shared night of passion changes everything.  Determined to belong to no one, Maria runs from Silvius as fast as she can (after all she had no idea when he said "mine", he meant forever), only to discover she's pregnant and the alien won't leave her alone.

The scenes between Silvius and Maria are well written, have good dialogue and some smoking chemistry.  While they don't really know each other that well, their shared stubborn behavior actually works for them both.  Silvius refuses to leave Maria behind and Maria refuses to give up on the baby.  Ms. Cielo did a good job developing all of the characters involved.

Will Silvius and Maria realize what they have really is love and it's forever?  Will they be able to get around the groups that won't want them together?  You'll have to read Maria's Match to find out, though I do recommend you read Surrender Serenity and Embracing Ember first.


Astrid Cielo is a Mississippi girl who enjoys a variety of things. By night, she is a nurse in her local ER, and by day, she is spilling her imagination out on paper.

Astrid began writing when she was a child her stories featuring a variety of characters (including her imaginary friends). When she was in high school she wrote her first completed story and was published twice in poetry anthologies. Gathering her courage, Astrid self-published her first book, Surrender Serenity, Salin's Salvation, Book 1 and enjoyed every minute of it.

Now she balances her time between being a nurse (which she loves) and writing down the scenes that play out in her mind. She also plays World of Warcraft (which all of her friends think is weird)!

Astrid would love to hear from you!

a Rafflecopter giveaway
Posted by Maria at Friday, March 15, 2013