Today I'm pulling back the cover on a new to me book series and author, courtesy of Shh Moms Reading.  I fell in love with this cover and blurb and even though I haven't had a chance to read the first book - Kiss of Fire - I can't wait to read this book.  I've added both to my Goodreads shelf. 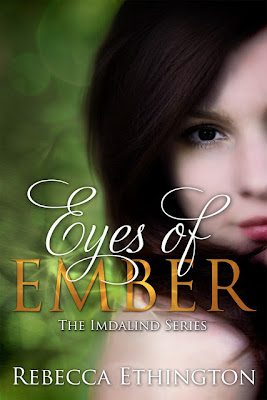 Eyes of Ember by Rebecca Ethington Paperback, 380 pages Expected publication: April 6th 2013 by Imdalind PressEyes of Ember is the second book in Ethington’s Imdalind Series.
Joclyn is in hiding, hunted by the man she still desperately loves. Ryland is gone, his mind erased, no memory of Joclyn remains. But, Joclyn’s heart desperately begs her to hold out hope. While, in reality the black eyed monster that possesses him, attempts to kill her over and over.
If it wasn’t for Ilyan, Joclyn would be dead by now.
Ilyan. The man who once stalked her, is now Joclyn’s protector, the only thing she has left. He protects Joclyn from the men who seek to end her life, and while she is haunted by dreams where Ryland begs her to break the bond between them.
Ilyan is there. Always there.
Ilyan trains and prepares her, teaching her everything she needs to know in the hope that one day she can avenge Ryland, if not protect herself from him.
And then there is her father.
The man who has never been there, is suddenly responsible for everything. And who he is has made Joclyn into something she never wanted to be.
The Silnỳ.

Kiss of Fire by Rebecca Ethington Paperback, 360 pages
Publication Date : October 30, 2012 by Imdalind PressKiss of Fire is the first book in Ethington’s Imdalind Series.
Joclyn Despain has been marred by a brand on her skin. She doesn't know why the mark appeared on her neck, but she doesn't want anyone to see it, including her best friend Ryland, who knows everything else about her. The scar is the reason she hides herself behind baggy clothes, and won't let the idea of kissing Ryland enter her mind, no matter how much she wants to.

The scar is the reason she is being hunted.

If only she knew that she was.

If only she had known that the cursed stone her estranged father sent for her 16th birthday would trigger a change in her. Now, she is being stalked by a tall blonde man, and is miraculously throwing her high school bully ten feet in the air.

Joclyn attempts to find some answers and the courage to follow her heart. When Ryland finds her scar; only he knows what it means, and who will kill her because of it.
Posted by Maria at Monday, March 18, 2013