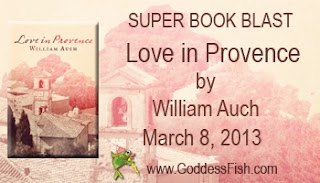 Welcome to my stop on Wiliam Auch's Super Book Blast for Love in Provence.  Please make sure to leave a comment or question below for William to let him know you stopped by.  William will be giving away a $25 Amazon GC to one randomly drawn commenter during the tour.  The more often you comment, the better your odds of winning.  You can Follow The Tour Here. 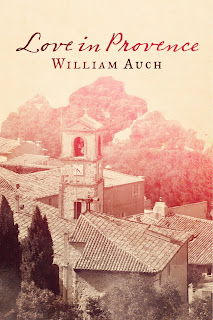 Love in Provence
by William Auch

When John Martin is forced to sell his tech company, he decides to take a six-month vacation to the south of France.

When he meets Madame Garcin, her daughter Sophie, and her granddaughter Isabelle, his life is changed forever. What began as a long vacation becomes a journey of self-discovery marked by love, loss, and tragedy.

He is molded by this family of three generations of women, tempered by tragedy themselves, in ways that he could never have imagined.

It seemed to John that the next three weeks could not go by fast enough. He was energized and quickly got back into the routine of jogging along the Embarcadero. It was a Sunday morning and John had made it all the way to the Marina Green, which was farther than the length of his usual run.

The green was filled with joggers, mothers pushing strollers, and the sailors heading for the yacht harbor. The sky was bright blue and cloudless, and a stiff breeze blew into the harbor from the other side of the Golden Gate. John stopped in the middle of the green to catch his breath and looked up to see a sky full of kites. There were large ones, small ones, one that looked like a dragon, and another which resembled a bird, all in a kaleidoscope of colors that were enhanced by the sun from above. They all danced in the wind, some darting side to side, and others diving toward each other as if to demonstrate who owned the skies. Some would descend to the ground then dart back up into the sky again.
Off to one side was a small girl with a pony tail, who ran across the grass as though she were about to lift off like a bird. Behind her she towed a small red kite, which stubbornly refused to become airborne despite her best attempts to launch it. Each time the kite plunged to the grass she would tighten the string again and make another run at it, only to have the kite rise about ten feet, then plummet to the grass. She tried over and over again with such determination, John wondered how long she had been at it. After each failed attempt she would look over at her mother who was keeping an eye on her from a distance, then the girl would continue with more determination than the previous attempt. John thought about Isabelle and how much he missed her. He could not wait to see her. He could imagine Isabelle when she was young, pulling on the kite string with the same determination as the little girl.

John walked over to her mother sitting on the grass and asked with a smile, “Do you mind if I give her a hand?”

Her mother raised her eyebrows at first and studied John from top to bottom, but then a smile slowly crept onto her face. “Sure, why not?”

William Auch is a physician residing in Sacramento, California. When not seeing patients, he writes, studies French, and travels the world.

Don't forget to leave a comment or question below for William to let him know you stopped by.  William will be giving away a $25 Amazon GC to one randomly drawn commenter during the tour.  The more often you comment, the better your odds of winning.  You can Follow The Tour Here.
Posted by Maria at Friday, March 08, 2013