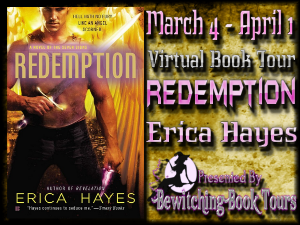 Welcome to my stop on Erica Hayes' Virtual Book Tour for her book Redemption (Seven Signs, Book 2).  Please make sure to leave a comment or question below for Erica to let her know you stopped by.  You can enter her tour wide giveaway by filling out the Rafflecopter form below. 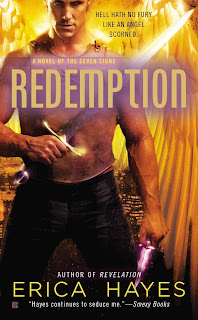 Japheth the Tainted is on the hunt for a mysterious demon vampire. But meeting her face-to-face might disarm his warrior spirit—and spark an unquenchable passion with apocalyptic consequences.

As a fallen angel, Japheth is determined to make his way back to heaven by staying pure and slaying hellspawn. With a new scourge of vampires unleashed by a blood-drinking demon, the Prince of Thirst, there’s plenty to be done. But Japheth is after one vampire in particular—the one they call the Angel Slayer.

Rose Harley never wanted to be a vampire, but the Prince of Thirst can turn even the kindest soul into a soldier of hell. Feeling abandoned by God, she stalks the West Village taking revenge on his angels—until she meets her match.

When Japheth and Rose encounter each other, the battle is fierce and charged with desire. But when they discover a common enemy—the Prince of Thirst himself—they form a dangerous alliance that could either cost them their eternal lives, or spark a love more powerful than heaven or hell.


“Looking for someone, angel?”

She grinned, mocking. Leaning against the redbrick wall beneath a rusted fire escape, steeped in magical shadow and hot vampire stink.

He stared, dumb. Tall for a girl, only a head shorter than he. Long legs, encased in blue jeans and black army boots. Her short black t-shirt stretched over full breasts, flashing that tempting skin above a silver belt buckle. Her bare arms shone, muscular but womanly. Sexy dimples in her cheeks, perfectly shaped for cupping in his palms.

The bloody feathers of slain angels, gold and white and red, stuck through the thick dark braid she tossed over her shoulder. A few wisps escaped to play around her face in the summer-night breeze. He wanted to trace their path with his fingertips, cheekbone to chin to cherry-ripe lips . . .

“Matter of fact, I am,” he said tightly. “Your sniveling master. Fluvium, is it? Prince of Thirst? Tell me where he is and I might kill you quickly.”

She laughed, fangs glinting. Sharp, lethal like a tigress’s. “You’ve come to kill Fluvium? Good luck with that.” She lolled on one foot, eyeing him speculatively, sizing up her prey. “Japheth, right? Of the Tainted Host? Cute name, for a hamster.”

Sweet lord, his name in her mouth sounded . . . dirty. He swallowed, rough. “How’d you know that?”

“I know my enemy.” She licked ripe lips.

“Rose Harley,” she cut in swiftly, with a wicked grin. “Whoops. Too late. Sorry about that. You like it anonymous, don’t you? So you can pretend they’re not people when you damn them to eternal torment?”

His grip spasmed around his sword. Sweet heaven, he wanted to stab her. Fill her with burning steel. Twist it, thrust it deeper, make her moan . . . “You don’t need me to damn you. You made your choice. Tell me where Fluvium’s hiding, and I’ll put you out of your misery.”

She laughed again, and strolled towards him, hands in pockets. “You sure could learn a thing or two from demons about making deals. Like, I dunno. Offering me something I actually want?”

Her knife still lay sheathed, in her thigh holster. Unafraid, was she? Grudging admiration tingled under his skin, and he crackled it off. Nothing admirable about a demon minion’s attitude. “So you do know where he’s hiding, then.”

“And what if I do?” She draped her sultry gaze over his silver-clad chest, his bare arms, his glowing blue sword . . . Her scrutiny flushed treacherous heat right to the top of his head. He could smell her, blood and corruption, yes, but underneath, the hot salty musk of female flesh . . .

Surely, she was his nemesis. Sent to tempt him into falling. Well, he wouldn’t give in. Not when he was so close to redemption.

Redemption, the second book in The Seven Signs series by Erica Hayes, picks up the tale of the "Tainted" host shortly after the events that took place in Revelation.  Continuing her extensive world building, Ms. Hayes gives us two somewhat doomed would be lovers, whose path to peace is fraught with guilt, blood and violence.  While I'm not sure I'd call them likable characters, they do none the less grab your attention and garner your sympathy,.

Once a warrior angel, Japheth, is now one of the "Tainted".  Unsure about exactly what he did to earn Archangel Michael's wrath, Japheth has spent the last 14 centuries killing demons and denying himself any kind of glory or joy in an effort to earn redemption.  Regardless of how many demons he kills, it never seems to be enough to get Michael off his back; at least until now.

Given the order to kill the demon vampire known as the "Angel Slayer" and her master, a demon prince known as Fluvium, Japheth has been promised re-entry into heaven upon the successful completion of his task by Michael.  Japheth never thought he'd fall in love with the enemy.

An up and coming star on Broadway, Rose Harley becomes a demon vampire after a night with Fluvium, a demon prince. Tricked into surrendering her soul  and hurting the only person she loves, Rose is angry at both heaven and hell for her situation.  Taking her anger out on angels keeps her out of hell where the soul of the person she betrayed angrily waits for her.

Trying to stay one step ahead of her master, Rose roams the night and streets of Babylon alone and in despair.  At least until she runs across one of the tainted angels, Japheth.  Promised more time on earth if she can turn one of the "Tainted" to the dark side, Rose plans to use seduction as a way of taking down the "Tainted" she couldn't kill

As Rose and Japheth meet and circle around each other, the third and fourth vials of the Apocalypse take center stage.  Ms. Hayes continues her world building by giving us glimpses into an Earth full of despair, destruction and little to no hope.  We get to know Rose and Japheth as the people they were, through flashes of  their past, and the people they've become.

While both are desperate to stay out of hell, they can't deny their attraction and are reluctant to carry out their assignments to destroy each other.  Both are sympathetic characters and easy to understand.  While desperate to gain re-entry into heaven, Japheth is still disdainful of humans (who he refers to as monkeys), though he can't deny his desire for Rose.  Meanwhile Rose finds herself falling deeper and deeper in love with a man she's supposed to corrupt.

The secondary characters continue to play an important part in this series, especially Archangel Michael, whose hatred of pretty much everyone and everything seems to know no bounds.  We do meet the Archangel Gabriel, who's not as clueless as Michael thinks.  Gabriel has his own doubts about what's going to happen at the end, and also seems to suffer from a spirit of despair.

The demons also play an important role, especially Fluvium, a theatrically inclined demon who is annoying as all get out, and his boss Azeroth.  Azeroth is running things in Hell until Satan is freed from his prison.  All four of these powerful beings have one thing in common, their disdain for humans and their growing thirst for power.  In fact one wonders what will happen to mankind as no one seems to care for the humans.

Will Rose be successful in her attempts to seduce Japheth to the dark side?  Will Japheth choose to stay on Earth with Rose when he's given a chance to get back into the heavenly host?  You'll have to read Redemption to find out.  I want to warn the reader that this is a series you'll want to read in order as each book builds on the previous installment. 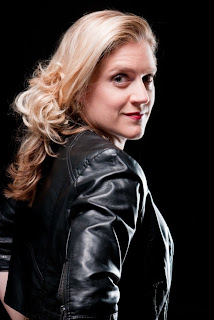 Erica Hayes was a law student, an air force officer, an editorial assistant and a musician, before finally landing her dream job: fantasy and romance writer.

She hails from Australia, where she drifts from city to city, leaving a trail of chaos behind her. Currently, she's terrorizing the wilds of Northumberland.

March 5 Promo and review
Queen of All She Reads
http://queenofallshereads.blogspot.com

March 8 Interview
All I Want and More
www.alliwantandmore.blogspot.com

March 13 Guest blog and review
Words of Wisdom from The Scarf Princess
http://wowfromthescarfprincess.blogspot.com

April 1 Promo and review
What the Cat Read
http://whatthecatread.wordpress.com


a Rafflecopter giveaway
Posted by Maria at Tuesday, March 05, 2013