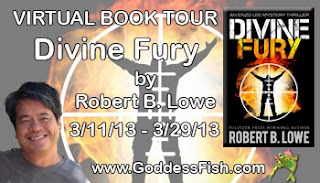 Welcome to my stop on Robert B. Lowe's Virtual Book Tour for Divine Fury.  Please leave a comment or question for Robert below to let him know you stopped by.  Robert will be awarding a $25 Amazon GC to one randomly drawn commenter during his tour, you can follow his tour here.  The more often you comment, the better your odds of winning.  You can check out my review here.

Guest Post - How Do Real World Events, Like Acts of Terrorism, Change the Writing of Thrillers?
by Robert B. Lowe


In Divine Fury I have a character who is an army veteran who has been injured in battle and then forced into civilian life where he never adjusts. As a result, he comes to hate the army, the country’s leaders and is primed with just a little encouragement to commit violence.

To help me create this character, my research took me in a few different directions. I looked at Timothy McVeigh, the Oklahoma City bomber and what had been written about his motivations. I read about the Black Hawk Down incident in Somalia when Army Rangers were caught under fire for a night, taking heavy fire and casualties, until an army column could rescue them the next day. And, I read about some of the conservative movements like the anti-tax groups in areas like Montana and Utah.

I don’t consider my thriller fiction particularly dependent on world events and political changes compared to someone like John le Carre. But, I still have to take into account current events – including the acts of terrorism people remember – since this creates the real world setting for readers and will affect their reaction to the events in my fiction. Of course, I want readers to find my stories and characters believable.

Starting with the assassination of John Kennedy in 1963, America has become more and more acclimated to terrorist violence but the exact nature of the violence has changed. Domestically, there were the well known assassinations of Robert Kennedy and Martin Luther King in the 60s – and attempts on others including presidents and presidential candidates. There has been international terrorism including the Lockerbie bombing of a jetliner heading to the U.S. in 1988, the Munich Olympics massacre of Israeli athletes in 1972 and terrorist bombing campaigns in North Ireland, the United Kingdom and Israel among other places.

But, while mass shootings have been a part of American life since 1966 when Charles Whitman killed 17 people and wounded another 34 at the University of Texas campus, the Oklahoma City bombing and then, in particular, the World Trade Center attack, represented new chapters in domestic violence and terrorism. In many ways, the old enemies of the Cold War – spy agencies of the Soviet bloc – have been replaced by the more amorphous villainy of terrorists whether Muslim jihadists, domestic dissidents or other groups.

While we thriller writers may have lost the old Cold War enemies – the Soviet bloc and, in particular, its spies, as the villains of choice, we now have all sorts of domestic and international terrorists to focus on now. The same fears that consume our national leaders and security agencies are fodder for thriller fiction.

As a small footnote, I did have to make one change in a book in the aftermath of the World Trade Center attack. I wrote the initial draft of my first book, Project Moses, prior to 2001. I set the climax in the famed Windows on the World restaurant at the top of one of its towers. It never occurred to me, of course, that within a few years it would disappear along with almost everyone working there into the rubble of the twin towers. Even though the book was set in the mid-90s, I felt it was too jarring to have the towers and restaurant still in existence and playing a key role in a book published in 2012. So I moved the scene to a restaurant at the United Nations. 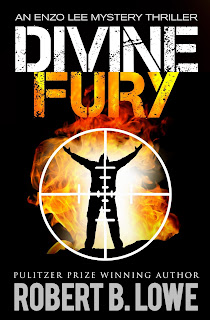 Candidate Andrew Harper was a college basketball star, a crusading prosecutor and a beloved Congressman. He is also openly gay. When the San Francisco politician gets the inside track to become California’s next governor, it sends shockwaves through the political and religious establishment.

Reporter Enzo Lee is cajoled into leaving his comfortable niche covering fluffy features for the San Francisco News to cover the historic campaign. A series of campaign events are mysteriously and dangerously disrupted. A key endorsement is scuttled at the last minute. An earlier murder takes on new significance when it is linked to a Watergate-style break-in involving computer spying.

But, finding the culprits behind political sabotage and high-tech hacking take a back seat when it’s discovered that a troubled war veteran armed with guns and explosives has begun a violent journey from small-town Montana to the City by the Bay.

When Lee becomes a target himself he must dodge attempts on his own life while trying to expose the conspiracy and, with the help of police allies, foil an assassination plot.

Divine Fury is the newly released second book in the Enzo Lee series from Pulitzer Prize-winning author Robert B. Lowe. The series was kicked off by the best-selling Project Moses, the bioterroism thriller that made the Amazon Top 20 Mysteries list and was a finalist in the Best Indie Books of 2012 competition.

Divine Fury is a page-turning thriller with suspense, action, romance and enough twists to keep the reader guessing. It also focuses on a timely theme as the issues of same-sex marriage and gay rights become a major cultural battleground in America.
EXCERPT

Lee saw the bright flash from the other side of the street an instant before he felt more than heard the boom of the explosion that tore through the bank of newspaper boxes and sent out a shock wave that shattered windows halfway up the office building behind. He saw a plume of smoke from across Market and heard the sound of glass breaking and falling, accompanied by the screams.

The first ones were screams of shock, surprise and fear by people around him. Two seconds later, he could hear people hurt and maimed howling in agony and those around them shouting for help.

Everyone was staring at the bomb site as the smoke continued to rise and the sound of glass hitting the pavement seemed to go on forever. Lee was staring in that direction as well when he saw Walberg. His face was streaked with black paint but Lee still recognized him. Walberg was climbing over the barrier. When he reached the other side, he reached into his coat, pulled out a gun and started walking toward the yellow Cadillac.

Lee pushed through the people in front of him and jumped the barrier. He started after Walberg. He saw Connors standing up in the Caddy next to Harper with one hand on his chest, holding him where he was seated. Like everyone else, she was staring in the direction of the bomb site.

“Bobbie!” yelled Lee, trying to get her attention. “Bobbie!” There was too much commotion . Too much noise. He couldn’t get her to look his way. Desperate, he reached into his pocket, found his cell phone and threw it at the Cadillac. Then, he sprinted after Walberg.

“A fascinating and fast-paced mystery/thriller. It is a thought provoking and extremely captivating story." – Kindle Book Review 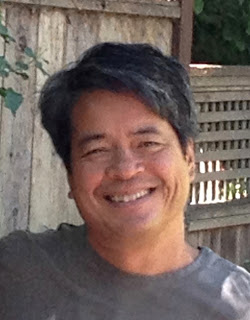 Robert B. Lowe is a Pulitzer-prize winning author whose fiction is based in San Francisco, his adopted home.

His past experiences – a 12-year career in investigative journalism and a Harvard Law School degree – enable him to write gripping mystery thrillers in both the legal and journalistic fields. Lowe draws his inspiration from John Grisham, Dick Francis and Lee Child and adds his own San Francisco twist. Readers will enjoy his references to the city’s landmarks such as Chinatown, North Beach and Pacific Heights and the Bay area’s foodie culture.

Divine Fury is Lowe’s second novel. His first was the best-selling Project Moses which reached the Amazon Top 20 Mysteries list and was a finalist in the Best Indie Books of 2012 competition hosted by the Kindle Book Review.

Divine Fury continues the adventures of Enzo Lee, a jaded journalist rehabilitating his career as a feature writer in San Francisco who stumbles into scandals and criminal conspiracies that require his investigative expertise to unravel.

When Lowe isn’t writing he enjoys a day at the golf course and spending time with his wife and daughters.

Don't forget to leave a comment or question for Robert below to let him know you stopped by.  Robert will be awarding a $25 Amazon GC to one randomly drawn commenter during his tour, you can follow his tour here.  The more often you comment, the better your odds of winning.
Posted by Maria at Thursday, March 28, 2013