Launch Week Spotlight - Walk Away With Me by Darby Davenport 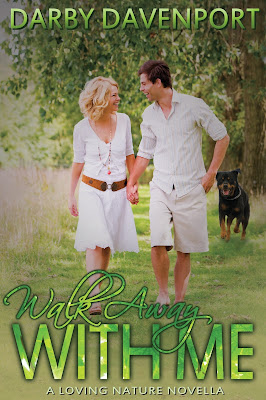 Welcome to my spotlight of Darby Davenport's new release Walk Away With Me.  Please make sure to leave a comment below for Darby.  You can enter her Launch Week Contest by filling out the Rafflecopter form below.


An Interview with Darby Davenport,
Author of Walk Away with Me

I'd like to welcome romance author, Darby Davenport, to the blog today as part of the celebration for the launch of her new novella, Walk Away with Me. You may know Darby under her other pen name, Emlyn Chand.

You're fairly well known as a YA author, why did you decide to start writing romance as well?

My life-long love affair with reading knows no bounds. I find it hard to write in only one genre when I enjoy reading so many. While I plan to right much more YA (I have to finish the Farsighted series, after all), I'm also drawn to romance in particular. Who doesn't love a happy ending that leaves the reader feeling warm and cozy? My cheerful romances help to counterbalance my dark and brooding YA. Together, they form the complete picture of who I am as an author. I wouldn't trade either for the world!

What are you doing differently with one pen name versus the other? Are you worried that the two different names will fracture your author identity?

It's definitely scary starting all over with a new pen name. I have 9 books out as Emlyn Chand, and this is just my first as Darby. YIKES! My publisher and I decided it would be best for me to take on this new romance alias to protect my younger readers from accidentally picking up a book they shouldn't be reading. My Bird Brain Book series is for readers ages 3 and up, while Walk Away with Me is really only for the 18+ crowd.

At first it was difficult figuring out where Emlyn ended and Darby began, but now I've really started getting into the whole multiple personalities thing. Yes, I have to start over with my author brand, but on the other hand... I get to start over! I've learned so much since first releasing Farsighted back in October 2011. I now have the opportunity to do everything better, stronger, faster. Maybe the lessons I learned as Emlyn will unlock a higher success for Darby. I don't know what the future holds, but I'm so excited to find out!

What is your favorite thing about the romance genre?

The idea that no matter how bad things get, everyone in entitled to a happily-ever-after.

You dedicated Walk Away with Me first to your dogs and then to your husband—why?

As much as I love my husband, this book really was written for the dogs. The two dogs in the book are modeled after our three dogs at home. My Lhasa Apso, Rugby, played a huge role in my love story with my husband. In fact, during our early days dating, Rugby would get so upset when Falcon wasn't around that he refused to eat, to play, to do anything but mope around and try to electrocute himself by chewing on cables. True story!

Dogs are such loving, intelligent creatures, and it breaks my heart that so many of them are without homes. Walk Away with Me isn't just an opus dedicated to my dogs but to all rescue dogs. There's even a special section in the back of the book where I talk about my lovable mutts, how they came to me, and why everyone should consider giving one of these wonderful animals a second chance at life.

What kind of reader will enjoy Walk Away with Me?

Obviously, I primarily had a female audience in mind, but if fellas are willing to give it a chance, I think they'll find Charlie is a woman they can get behind. Lovers of animals, nature, Thai food, and Cesar Milan will also enjoy the story :-)

About Walk Away with Me

A man with a painful past, a woman who fears commitment, and a dog with only one more chance at life--together, can they find love?

What is Charlie Rockwell supposed to do when the sad Rottweiler's eyes connect with hers through the TV screen and work their way straight into her heart? She adopts him without a second thought or the slightest knowledge how to take care of the large, needy dog with the traumatic past.

Ethan Porter is not happy when a savage Rottweiler picks a fight with his mild-mannered Golden Retriever at the dog park. But his anger quickly dissipates when tears begin to form behind the eyes of the dog's beautiful owner--eyes that are far too familiar for his liking. Disregarding his instincts, Ethan can't deny her plea when she asks him to teach her the basics of dog ownership.

Can he ignore the fact that she bears a strong resemblance to his ex and finally learn to trust again? Will she find committing to both man and dog more exciting than the freedom of a single, unrestrained life?

Walk Away with Me is just $2.99 for the eBook and $9.95 for the paperback. Here are all the links you'll need: Amazon US, Amazon UK, Barnes & Noble, Smashwords, Kobo Books, GoodReads.

"Lovable characters, compelling plot, and an exciting twist that will leave you on the edge of your seat as Charlie and Ethan find their happily-ever-after." ~ Lucy Kevin, New York Times bestselling author of THE WEDDING KISS 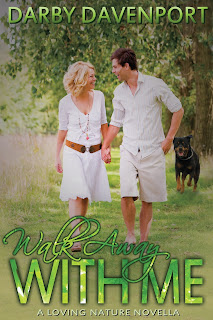 Walk Away With Me
by Darby Davenport
A  Loving Nature Novella

Read the First Chapter of

Walk Away with Me by Darby Davenport

The scrawny Rottweiler's eyes connected with Charlie's through the TV screen, begging her to save him.
What if nobody else calls in? What if I'm his last chance at finding a home? Well, crap. I can't just let him die. She grabbed her cell phone, called the local news station hosting the adoptable pets segment, and signed on the dotted line. Not once did she think she might be making a mistake. Not once did she consider the fact she'd been unable to commit to a man—or even a roommate—longer than two measly months.
And now she planned to commit to a one-year-old canine coming straight from a neglected past?
Well, adventure had certainly found her, whether she'd asked for it or not.
The rescue volunteers didn't ask many questions before inviting her to visit the kennel and come pick him up. If they had, maybe she'd have changed her mind.
She might have seen this as a move with the potential of becoming the biggest mistake of her entire life. Worse than the time she'd left mid-semester her junior year to travel to India in search of the answer to life. Worse than the time she'd got so caught up in the cinematic excitement of V for Vendetta she'd shaved her head in homage. Even worse than the time she'd practically eloped with a guy she'd only dated three weeks, because it seemed like a good and wildly romantic idea at the time.
At least she'd talked herself out of that one.
But what good did escaping one bad decision do her, if she'd just replaced it with another by committing herself to a strange dog for, at minimum, the next ten years?
Charlie took a deep breath and gripped the steering wheel until her knuckles turned white. No going back now. She may have been impulsive, but she had a heart, damn it, and she wouldn't abandon a dog no one else wanted in the first place. Definitely too late to change her mind at this point. "Now or never," she said to the hula dancer figurine on her dashboard before grabbing her purse and slamming the car door behind her.
"Oh, you must be Charlotte Rockwell." A volunteer with a sloppy button-up shirt and a way-too-large smile greeted her the second she entered the shelter.
She nodded, pretending her feet were one million pound weights gluing her to the linoleum floor below—the only way she'd be able to avoid making a break for it.
"I'm Angela. Come on and follow me to the back." Her oversized smile grew even larger as she turned and trotted toward the back of the building.
Charlie's eyes darted to the floor to check if Angela's shoes sported actual springs.
"I'm sure Ruby told you everything you need to know when she stopped by for the home check, right?"
She nodded, even though she didn't have the slightest idea who Ruby was. The woman certainly hadn't been by her house for a visit.
"Perfect! Rugby's such a sweet boy once you get to know him. I'm so glad he's finally found a good home. You must be thrilled."
'Once you get to know him?' What does that mean? She was this close to changing her mind and dashing straight out of there, but when they pushed through the large metal door to the kennel, Rugby glanced up at her with those same sad eyes that had melted her heart in the first place.
She was screwed.
"Hi, Rugby," Angela cooed in a goochy-goo voice. "Look who it is. Your new mommy's come to take you home. Who's a good boy? Yes, you are."
Charlie sank to a squatting position and stuck her index finger through the metal fencing.
Rugby stretched and raised himself into a sitting position. He sniffed her hand delicately and gave her a huge sloppy lick.
"Oh, see. You two are perfect! Best buds already," Angela squealed. She rattled off a litany of instructions, shoved the folder of paperwork into one hand, and the leash to Charlie's new 115-pound baby in the other, and together dog and woman headed home. 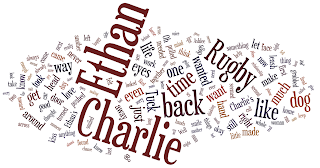 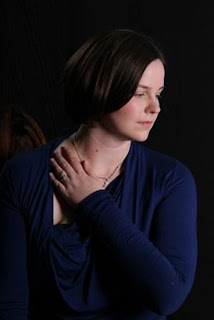 Darby Davenport never believed in love--that is, until it happened to her. Now she's a firm believer that every story is a love story, and has taken to writing out her favorite romantic fantasies and sharing them with the world.

You can connect with her at www.DarbyDavenport.com.

a Rafflecopter giveaway
Posted by Maria at Wednesday, March 20, 2013