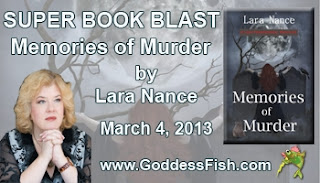 Welcome to my stop on Lara Nance's Super Book Blast Tour for Memories of Murder.  Please make sure to leave a comment or question below for Lara to let her know you stopped by.  Lara will be awarding a signed cover flat at each stop on her tour.  She will also be awarding one (1) $50 Amazon Gift Card to a randomly drawn commenter.  The more often you comment, the better your odds of winning.  You can follow all of her tour stops here.  I will be posting a review for this book later this week. 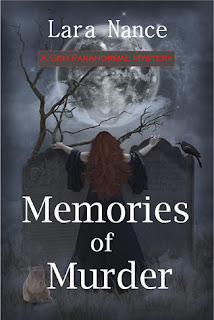 Memories of Murder
by Lara Nance
A Gem Paranormal Mystery

When Maeve McKenna renounces her witch powers and accepts a low-key nurse practitioner position at a Virginia retirement community, the last thing she expects is a suicide her first day on the job.

As the town's sexy sheriff, Paul Sutton, starts looking into the tragic death of his father's friend, Maeve can't help but get involved--with both the case and him. Their informal investigation unveils an old journal that connects the ruins of a nearby asylum and long-forgotten cemetery with the shiny new retirement community's memory unit--and Maeve's Alzheimer's patients.

Maeve senses a sinister presence in the old asylum, calling to the patients, but in order to stop it from killing again, she must first conquer some demons of her own and reclaim the magic she's denied herself.


She imagined the thoughts that must be running through his head. She had to tell him everything now. If she didn’t, he would be dead in the next few days. He needed protection.

She stood up. “Want a glass of wine? This is going to be a long conversation.”

“Since I was just nearly killed, how about some whisky?” He fell back against the sofa. Liadan put her paws on his chest and licked his face.

Maeve went into the kitchen, trying to figure out how she’d gotten her powers back. It dawned on her that the morning after the Gems had arrived, her tea was not in its regular spot on the counter. She’d assumed her mother had only been cleaning, but apparently she’d also switched the contents of the jar to non-spelled tea.

She reached into the cabinet for the tea container and looked at it, shaking her head, then laughed. Never had she been so glad for the Gems meddling in her life. She threw it in the trash and returned to the living room with glasses, red wine, and a small bottle of George Dickel missing a few sips. “Here you go.”

He took the whiskey and tossed back a shot, then poured another glass, which he held between his hands. “So, what is it that tried to kill me and my father today?”

“You’re not going to believe me at first, but if you’ll hear me out, I think I have a pretty good case.”

He gestured with one hand for her to begin.

“Everything I’ve seen and heard, all the information in the journal, points to the presence of an evil spirit. I believe it’s the spirit of Dr. Colton Carterage.”

Paul stared at her for several moments. “You’re serious.”

“Completely.” She poured herself a glass of red wine from the freshly opened bottle, and sat in the chair across from him. A tingle of energy floated in the air. She recognized a witch cat at work. She tried desperately not to laugh at Liadan working her little cat magic on him, licking his face, nuzzling his chest, pushing her paws against his arm. He didn’t know what was happening, but darling LiLi was removing the mists of doubt from Paul’s eyes.

Maeve explained about patients in the dementia unit seeing ghosts of people described in the book. She told him about the white deer and why the limb had fallen. When she came to the part she dreaded most, she looked at LiLi and the cat complied. She curled up in his lap, purring, increasing the intensity of her witchy magic to ease his believing.

“There’s one more thing you need to know. My mother, my aunts…and me…we’re witches.” 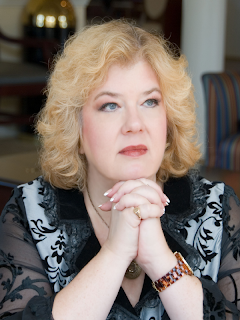 Lara Nance grew up and lived in many cities throughout the South. She loves to write in a variety of genres within the scope of women’s fiction. But the basis of all her stories is a tale that will entertain and intrigue.

If you want to escape and lose yourself in a novel, you’ve come to the right place. Choose your genre and settle in to be entertained. From thrilling mysteries and steampunk tales, to paranormal romance and adventure, Lara’s willing to explore a variety of compelling stories full of danger and suspense, with a touch of romance.

Having been on the fencing team in college and now living on a sailboat convinces her that she was a pirate in another life, or possibly kin to Errol Flynn… However, due to the unfortunate demise of the romantic pirates of the past, she lives out her fantasies, thrills and adventures in her stories.

Currently docked in Norfolk, Virginia (until the wind changes) Lara enjoys living on her sailboat and spends time reading, of course writing, indulging a variety of artistic endeavors, cooking and sailing with her husband, Joe and their Yorkie, Rio.

Don't forget to leave a comment or question below for Lara to let her know you stopped by.  Lara will be awarding a signed cover flat at each stop on her tour.  She will also be awarding one (1) $50 Amazon Gift Card to a randomly drawn commenter.  The more often you comment, the better your odds of winning.  You can follow all of her tour stops here.