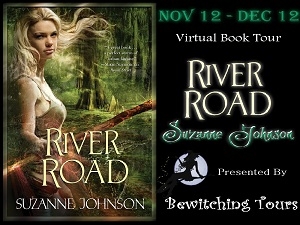 Welcome to my stop on Suzanne Johnson's Virtual Book Tour for River Road.  Please make sure to leave a comment or question below for Suzanne to let her know you stopped by.  You can fill out the Rafflecopter form to enter her tour wide giveaway. 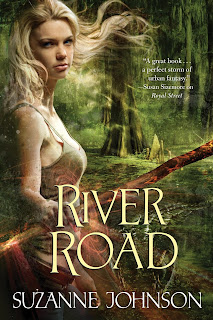 Hurricane Katrina is long gone, but the preternatural storm rages on in New Orleans. New species from the Beyond moved into Louisiana after the hurricane destroyed the borders between worlds, and it falls to wizard sentinel Drusilla Jaco and her partner, Alex Warin, to keep the preternaturals peaceful and the humans unaware. But a war is brewing between two clans of Cajun merpeople in Plaquemines Parish, and down in the swamp, DJ learns, there’s more stirring than angry mermen and the threat of a were-gator.

Wizards are dying, and something—or someone—from the Beyond is poisoning the waters of the mighty Mississippi, threatening the humans who live and work along the river. DJ and Alex must figure out what unearthly source is contaminating the water and who—or what—is killing the wizards. Is it a malcontented merman, the naughty nymph, or some other critter altogether? After all, DJ’s undead suitor, the pirate Jean Lafitte, knows his way around a body or two.

It’s anything but smooth sailing on the bayou as the Sentinels of New Orleans series continues.

The minute hand of the ornate grandfather clock crept like a gator stuck in swamp mud. I’d been watching it for half an hour, nursing a fizzy cocktail from my perch inside the Hotel Monteleone. The plaque on the enormous clock claimed it had been hand- carved of mahogany in 1909, about 130 years after the birth of the undead pirate waiting for me upstairs.
They were both quite handsome, but the clock was a lot safer.
The infamous Jean Lafitte had expected me at seven. He’d summoned me to his French Quarter hotel suite by courier like I was one of his early nineteenth-century wenches, and I hated to destroy his pirate-king delusions, but the historical undead don’t summon wizards. We summon them.

I’d have blown him off if my boss on the Congress of Elders hadn’t ordered me to comply and my co-sentinel, Alex, hadn’t claimed a prior engagement.

At seven thirty, I abandoned my drink, took a deep breath, and marched through the lobby toward the bank of elevators.

I reached the door of the Eudora Welty Suite and knocked, reflecting that Jean Lafitte probably had no idea who Eudora Welty was, and wouldn’t like her if he did. Ms. Welty had been a modern sort of woman who wouldn’t hop to attention when summoned by a scoundrel.

He didn’t answer immediately. I’d made him wait, after all, and Jean lived in a tit- for- tat world. I paused a few breaths and knocked harder. Finally, he flung open the door, waving me inside to a suite plush with tapestries of peach and royal blue, thick carpet that swallowed the narrow heels of my pumps, and a plasma TV he couldn’t possibly know how to operate. What a waste.

“You have many assets, Drusilla, but apparently a respect for time is not among them.” Deep, disapproving voice, French accent, broad shoulders encased in a red linen shirt, long dark hair pulled back into a tail, eyes such a cobalt blue they bordered on navy. And technically speaking, dead.

He was as sexy as ever.

He eased his six-foot-two frame into a sturdy blue chair and slung one long leg over the arm as he gave me a thorough eye raking, a ghost of a smile on his face.

I perched on the edge of the adjacent sofa, easing back against a pair of plump throw pillows, and looked at him expectantly. I hoped what ever he wanted wouldn’t jeopardize my life, my job, or my meager bank account.

“You are as lovely as ever, Jolie,” Jean said, trotting out his pet name for me that sounded deceptively intimate and brought back a lot of memories, most of them bad. “I will forgive your tardiness— perhaps you were late because you were selecting clothing that I would like.” His gaze lingered on my legs. “You chose beautifully.”

I’d picked a conservative black skirt and simple white blouse with the aim of looking professional for a business meeting, part of my ongoing attempt to prove to the Elders I was a mature wizard worthy of a pay raise. But this was Jean Lafitte, so I should have worn coveralls. I’d forgotten what a letch he could be.

“I have a date after our meeting,” I lied. He didn’t need to know said date involved a round carton with the words Blue Bell Ice Cream printed on front. “Why did you want to see me?”

There, that hadn’t been so difficult—just a simple request. No drama. No threats. No double- entendre. Straight to business.

“Does a man need a reason to see a beautiful woman? Especially one who is indebted to him, and who has made him many promises?” A slow smile spread across his face, drawing my eyes to his full lips and the ragged scar that trailed his jawline.

I might be the empath in the room, but he knew very well that, in some undead kind of way, I thought he was hot.

I felt my face warming to the shade of a trailer- trash bridesmaid’s dress, one whose color had a name like raging rouge. I’d had a similar reaction when I first met Jean in 2005, two days before a mean hurricane with a sissy name turned her malevolent eye toward the Gulf Coast. I blamed my whole predicament on Katrina, the bitch.

Her winds had driven the waters of Lake Pontchartrain into the canals that crisscrossed the city, collapsing levees and filling the low, concave metro area like a gigantic soup bowl.

But NBC Nightly News and Anderson Cooper had missed the biggest story of all: how, after the storm, a mob of old gods, historical undead, and other preternatural victims of the scientific age flooded New Orleans. As a wizard, I’d had a ringside seat. Now, three years later, the wizards had finally reached accords with the major preternatural ruling bodies, and the borders were down, as of two days ago. Jean hadn’t wasted any time. 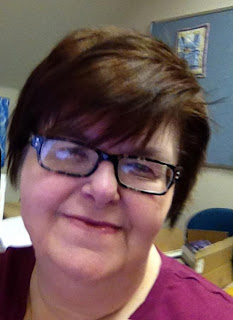 Suzanne Johnson writes urban fantasy and paranormal romance from Auburn, Alabama, after a career in educational publishing that has spanned five states and six universities. She grew up halfway between the Bear Bryant Museum and Elvis' birthplace and lived in New Orleans for fifteen years, so she has a highly refined sense of the absurd and an ingrained love of SEC football and fried gator on a stick.

Beginning three years after the events of Hurricane Katrina, Drusilla Jaco (DJ) is the acting sentinel in New Orleans.    While Drusilla's magic has matured and grown over the last three years, the Elders still think she's not ready to be on her own.  They still have shapeshifter Alex Warin assigned to be both her bodyguard and her partner.  As if dealing with both her growing emotions for Alex, and his for her, Drusilla finds herself summoned by non other than the undead pirate Jean Lafitte, who she still owes a favor due to his previous help.

Ms. Johnson did a good job developing Drusilla's character in this installment, she's not only dealing with magical problems; a brewing war between two mer-people factions and a shapeshifting were-gator hiding out in the bayou, she's also got to deal with a would be undead lover who she doesn't trust, a partner she feels more for than she should and an ex-boyfriend who just returned to town and is now a werewolf.  I liked how she wasn't willing to be let anyone run over her and how she kept a positive and even humorous outlook on life.  Her snarky dialogue was very enjoyable.

Determined to keep magical peace in New Orleans and keep humanity safe from the supernatural problems, DJ finds herself having to work with all of the men in her life.  She also finds herself meeting new magical beings and making some fascinating discoveries.  I especially liked the introduction of the mer-people and thought the were-gator was an interesting addition.

Will DJ be able to keep peace between the Mers?  Will she ever discover what Jean Lafitte is really after?  You'll have to read River Road to find out.  While a part of a series, I was able to enjoy this book all on it's own.  I do however plan to go back and read Royal Street, the first book in the series because that's just how I am, I really like to read all of the books in a series and in order.

December 11 Promo and review
Queen of All She Reads blog
http://queenofallshereads.blogspot.com/

a Rafflecopter giveaway
Posted by Maria at Tuesday, December 11, 2012