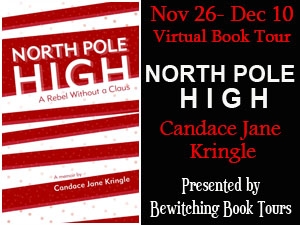 Welcome to my stop on Candace Jane Kringle's North Pole High: A Rebel Without a Clause Virtual Book Tour.  Please be sure to leave a comment or question below for Candace to let her know you stopped by.  You can fill out the Rafflecopter form below to enter her tour wide giveaway.


GUEST POST: Who Should Play Me In The Movie by Candycane Claus

While there hasn’t been any talk yet about my book, North Pole High: A Rebel Without a Claus, being turned into a Major Motion Picture, except from my dear, proud mother, it’s always fun to think about who would be in my Dream Cast.

If the movie were being made today, I’d like to see Laura Marano from Austin & Ally playing me. But since it will probably take Hollywood a few years to discover my tome, I’m thinking I’d better go with someone who will still be able to play something resembling a teenager by the time the cameras start rolling. So by that reckoning, Willow Shields (Primrose Everdeen in The Hunger Games), will make a perfect Candycane Claus when the time comes. My best friend, Snowflake, has to be played by Modern Family’s Ariel Winter.

Now for the boys! The first name that comes to mind for my love interest is Zachary Gordon. He’s cute, but just don’t tell Rudy I picked the “Wimpy Kid” to play him, lol. To play his rival, Tinsel, I’m thinking Ross Lynch, also from Austin & Ally. And I see the roles of Chefy, our seven-foot-tall penguin chef, and Mr. Polar Bear, my high school teacher (and a polar bear), both being played by creature specialist Doug Jones (Pan’s Labyrinth).

To play my mother, the dear, sweet Mrs. Claus, there really is only one choice: Meryl Streep. Heck, she’s so good, she could play my dad! But for my actual first choice to play dear old Dad, aka Santa Claus, aka the jolly old Saint Nick, I’m going to have to insist on Jeff Bridges. Head shrink me all you want to find out why I see Rooster Cogburn as my dad, but you only see the guy once a year when he’s at his best. Put Mr. Bridges in a fat suit and slap a white beard on him and you’ll see the Santa only I know and fear on a daily basis. So it’s either the Iron Monger, or my second choice, the evil President Snow from The Hunger Games, who I think is the father of that guy from 24.

That’s who I hope to see on the red carpet one day at the premiere of North Pole High: The Movie! 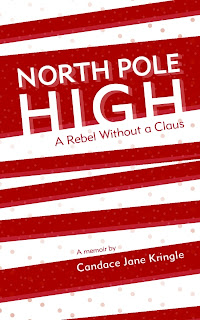 MEET SIXTEEN-YEAR-OLD CANDYCANE CLAUS. She's the most popular girl at North Pole High. Her father is world-famous. And every day is Christmas. What more could any girl want?

BOYS! And the new boy, Rudy Tutti, is hot chocolate. But he hates anything to do with Christmas!

When Candy and Rudy are forced to work together on a school Christmas-tree project, her world is turned upside down: Her grades start to suffer, she loses her taste for ice cream, and now the two North-Star-cross'd teens must contend with her overprotective father — Santa Claus — before Christmas is ruined for EVERYONE!

Thirty-two tiny hooves clippity-clopped up the walkway alongside two heavy boots. My whole body quivered. I’d been waiting alone in the dark, empty stable for over an hour, sitting in front of the storage space under the sink where I sometimes used to hide when I was little, wishing I could still fit—my father might be making me live out here from now on.

I shuffled outside to help unhook the reindeer’s harnesses and guide them into their stalls. The pits of Daddy’s coat were stained with perspiration from walking the girls home. Neither of us said a word. I waited for him to break the silence, then decided an apology would sound more sincere if offered before being demanded.

He kept tending to the animals as if he hadn’t heard me. Then he made a heavy sigh and, without looking at me, as if he were talking to Cupid instead, said, “In over a hundred years, I have never had to pick up my reindeer from an impound lot.”

He went back to filling Cupid’s water bowl.

“Look at Blitzen!” Daddy’s face turned purple. His eyes widened as if they had a mind to shoot out of his head and spank me. “She’s shaking! These deer need to be in tip-top shape! I have a mall tour coming up.”

I deserved to be scolded, even though it seemed kind of pointless since the things he was yelling at me were not things I didn’t know. As he bellowed about my foolish irresponsibility, I couldn’t help but remember how proud I’d been of my dad the first time I got to go with him on a mall tour—his annual visit to every department store in the world, where he finds out what you all want for Christmas. My father, at his best. He so loves getting out there in front of all the good little children, it shines from him as if his soul were composed on a Lite-Brite set.

I sometimes envied the attention he lavished on all those kids during all those business trips. Kids he barely knew. Then this one time, at the Millenia Mall, a little girl named Kimberly told me how lucky I was to have the coolest guy for a dad all year round. To her, he was a rock star, and it was easy to see why.

“It was so stupid of me to take the sleigh,” I told him. “I don’t blame you for being mad at me.”

Daddy tore off his gloves and whipped them to the ground so fast it made me shudder, along with half the reindeer. “That right there is what angers me the most. That you want to protect that miscreant sleigh thief. He has dragged you down so low you don’t even know which way is Christmas anymore.”

“But Daddy, I’m the one who took the sleigh. Rudy had nothing to do with it.”

“Don’t you lie to me. I am still your father. It’s not too late for you to wind up on the Naughty List too, young lady.”

Sweet Nicholas! He’d never threatened to N-List me before. He’d never even joked about it. Nobody born in the North Pole, let alone of Claus blood, had ever come close to making the List. It just didn’t happen.

Daddy parked his jumbo butt on a wooden stool and ran his fingers through his beard. “Your mother thought I was being too hard on you over the incident with your grades,” he said. “She thinks I should butt out of your ‘private affairs’.” He made air quotes and sneered like the words were choking him. “Boys, she meant. Well, look where boys have gotten you so far.”

He popped a handful of jelly beans in his mouth and kept lecturing while he chewed. “…No, in truth it appears you require even more discipline. I was prepared to let you come with me on my mall tour this year, but now,” he blinked for dramatic effect, “I’m afraid that can’t happen.”

My reaction was the last thing either of us expected. It started with a laugh, but that didn’t hurt his ego enough. “Good!” I shouted. “It’s boring going to malls with you. You only pay attention to those brats who line up begging you for toys. You think they idolize you, but you’re just buying their love, and I don’t want any part of that. I’m sick of being a Claus!”

Candace Jane Kringle is a junior at North Pole High. She likes candy canes, unicorn races, and making snow angels. Her father is the most well-known and beloved toymaker and distributor in the world. Her memoir, North Pole High: A Rebel Without a Claus, is her first book. After high school, she plans to enroll at North Pole University and write more books.

A modern holiday take on Romeo and Juliet, Candace Jane Kringle's North Pole High: A Rebel Without A Claus is a tasty holiday treat. With well developed characters, fun dialogue, plenty of fantasy and a forbidden romance, this YA Romance captured my attention from the first page. Set in the North Pole where everything has truly come to life, and occasionally not as you would expect, this story is guaranteed to put a smile on any Grinch's face!

CandyCane Claus is part of the North Pole royalty. With the most famous man as her father, she's the most popular girl in high school. Dating Tinsel, the half-elf boy most girls think is better than "hot chocolate", she's got the world literally in her palm. A good student and a good daughter, who has just realized her father isn't too comfortable with her becoming a "woman", CandyCane suddenly finds herself interested in Rudy Tutti, the new boy in town.

A new resident to the North Pole, Rudy Tutti has just enrolled in North Pole High. The son of the new dentist in town, he's different from every boy CandyCane has ever known. Dressing in combat boots and drab clothes, Rudy sticks out from every boy in the crowd, falling for the most popular girl something he didn't count on.

When CandyCane and Rudy are paired together for a school project everyone is surprised at how well they gel along. Especially her father, Santa Claus, who's not prepared for the way his daughter changes. Trying to split them up, Santa suddenly finds his life complicated and out of control. Ms. Kringle did a wonderful job developing her characters and bringing them to life. The romance between CandyCane and Rudy was well blended into the story and we got to see that being the daughter of Santa Claus is not just a life full of perks, each member of the family has responsibilities which play a part in the success of the holiday. While CandyCane was somewhat spoiled and led a privileged life, it was good to see her willing to embrace someone who could show her something different.

Will CandyCane and Rudy's star crossed romance work out? And will Santa Claus be able to make sure this Christmas is a wonderful as those of the past? You'll have to read North Pole High: A Rebel Without A Claus to find out. I enjoyed it and I think you will too.

December 10 Guest blog and review
A Chick Who Reads
http://achickwhoreads.blogspot.com


a Rafflecopter giveaway
Posted by Maria at Friday, December 07, 2012