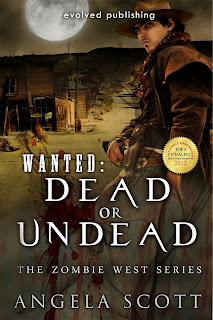 Trace Monroe doesn't believe in luck. He never has. But when a fiery-headed cowgirl saunters through the saloon doors, wielding shotguns and a know-how for killing the living dead, he believes he just may be the luckiest man alive.

Trace wants to join Red's posse, but she prefers to work alone--less messy that way. In order to become her traveling companion, Trace has to agree to her terms: no names, no questions, and if he gets bit, he can't beg for mercy when she severs his brain stem.

He agrees, knowing only that Red is the sharpest shooter he's ever encountered. The fact she's stunning hasn't escaped his attention either.

What he doesn't know, is that Red has a very good reason to be on top of her game. She not only has the answer for how they can all outlive the plague taking over the wild, wild west, she IS the answer.

Zombies, a spunky heroine and a hero smoother than butter make Angela Scott's Wanted: Dead or Undead a great start to The Zombie West series.  With plenty of action, fun dialogue and enough romance to keep things going, this paranormal tale of the Old West captured my attention from the first page.  Well developed characters and good world building make this book a strong entry in the YA field.

A zombie hunter by necessity, Elisabeth, or "Red" as she's now known, is roaming West in order to locate her older brother.  Disposing of the infected along the way has become a way of life for her, running into a handsome cowboy who won't leave her alone is an unexpected surprise.  Becoming the leader of a small posse of uninfected was never a part of her plan.

A gambler and a cowboy, Trace Monroe has always believed in his luck.  How else could he explain "Red" walking into a saloon and saving the patrons from a zombie no one seemed to be able to take down.  Realizing she's the girl on the "Wanted" poster could lead to a large reward, if he can gain her trust.  Falling in love with her was definitely not a part of his plan.

The scenes between "Red" and Trace, or "Cowboy" as Red likes to call him are full of humor, plenty of action and sharp dialogue.  A loner by habit, Red really wants to be left alone to go her own way - something Cowboy has no intentions of letting her do.  Learning to depend on each other becomes quite the adventure.

Joined by some colorful and interesting secondary characters, Red and Cowboy make their way across the land.  Will Red ever become comfortable enough to share the secrets to her zombie hunting success?  Will her secret change the growing romance between Red and Cowboy?  You'll have to read Wanted: Dead or Undead to find out.  I liked it and I think you will too.

FTC Disclosure:  I received a complimentary copy of this book as a part of a blog tour in exchange for a fair and honest review.