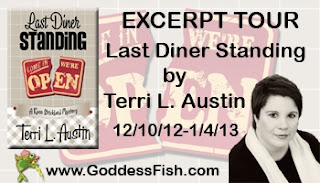 Welcome to my stop on Terri L. Austin's Excerpt Tour for Last Diner Standing.  Please make sure to leave a comment below to let Terri know you stopped by.  Terri will be awarding one commenter at every stop a signed bookmark and a cover postcard (USA/Canada Only), and one randomly drawn commenter on the tour will receive a $25 gift card to Amazon or B&N, winner's choice.  You can follow her tour stops here, the more often you comment, the better your odds of winning. 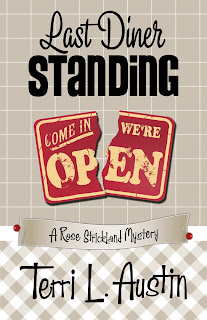 Rose Strickland is having a blue Christmas. Her friend is arrested for attempted murder, her sexy bad guy crush is marked by a hit man, and her boss is locked in an epic smackdown with a rival diner. Determined to save those she loves, Rose embarks on an investigation more tangled than a box of last year's tree lights. With her eclectic gang at the ready, Rose stumbles across dead bodies, ex-cons, chop shops, jealous girlfriends, jilted lovers, and a gaggle of strippers in a battle for freedom she might not survive.

There are some absolutes in this life that are irrefutable. If you leave the house looking like crap, you’ll see someone you know, usually an ex-boyfriend. If you’re running late for an appointment, you’ll hit every red light on the way. And a three a.m. phone call is never good news. Either someone’s dead, in the hospital, or you’re a drunken booty call. But that Saturday morning, I discovered another reason to avoid the ringing harbinger of bad news.

I sniffed and sat up on my futon. “Janelle?”

“Of course it’s Janelle. They think I tried to kill Asshat.”

Scrubbing a hand over my eyes, I glanced at the clock. “Asshat?”

Janelle lowered her voice. “Rose, wake up and listen. I’m in jail, Asshat’s in a coma, and they’re saying I tried to kill him. I need help.”

Her dilemma finally penetrated my sleep-fogged brain. “Oh my God. Where are the kids?” Janelle had two, Damon, nine, and Sherise, seven. Both so cute you wanted to pinch their little cheeks. But I wouldn’t recommend it—that Sherise was a biter.

“They’re staying with my cousin, Sondra. But I got to get out of here. If they think I’m spending Christmas in jail then I’m Halle Damn Berry.”

“Call that fancy lawyer you know. He’ll figure it out.”

Dane Harker. “I’ll call him and come see you in the morning. Will they let me bring you anything?”

“Cigarettes and toiletries. These bitches trade everything for cigarettes. And Rose? Thanks.” 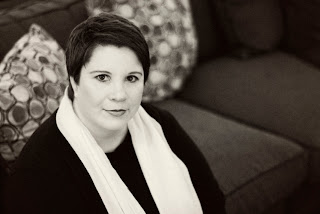 Terri L. Austin lives in Missouri with her funny, handsome husband and a high maintenance peekapoo. She’s the author of Diners, Dives and Dead Ends—a Rose Strickland Mystery. “Austin’s debut kicks off her planned series by introducing a quirky, feisty heroine and a great supporting cast of characters and putting them through quite a number of interesting twists.” Kirkus Reviews

Don't forget to leave a comment below to let Terri know you stopped by.  Terri will be awarding one commenter at every stop a signed bookmark and a cover postcard (USA/Canada Only), and one randomly drawn commenter on the tour will receive a $25 gift card to Amazon or B&N, winner's choice.  You can follow her tour stops here, the more often you comment, the better your odds of winning.