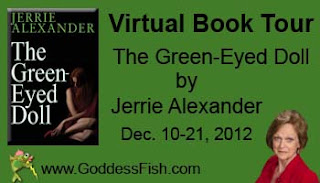 Welcome to my stop on Jerrie Alexander's Virtual Book Tour for The Green-Eyed Doll.  Please make sure to leave a comment or question to let Jerrie know you stopped by and to enter her tour wide giveaway.  Jerrie will be awarding a $10 Amazon or Barnes and Noble GC to a randomly drawn commenter at the end of each week, and a $20 Amazon or Barnes and Noble GC to one randomly drawn commenter from all comments during the tour, awarded at the end of the tour.  You can follow all of her tour stops here, the more often you comment, the better your odds of winning.


Ever read a romantic suspense novel late at night and heard noises that made you jumpy? The tension of the threat to the hero or heroine ups the odds against them having a happy ever after ending.

A murderer that threatens a main characters life adds an entirely new dimension to the conflict expected by a reader. The hero and heroine have strong personalities with heavy internal baggage, but when someone they care about finds themselves in jeopardy, their diverse personalities are set aside, and they rise to the occasion.

Paced correctly, that conflict escalates, taking the reader on an emotional roller coaster ride. When the hero and heroine finally succumb to their attraction, the sex is well worth waiting for.

In a romantic suspense, the villain plays an important role. Without his threat, you wouldn't have one of the main ingredients of a romantic suspense. In fact, you'd have a romance novel. So it's critical that he's believable, has his own internal demons, and perhaps at times the reader might feel a little sympathy for his condition.

The internal and external conflicts of the hero and heroine can't be resolved until the danger the villain presents is vanquished. Who will live? Who will die? Sometimes the answers surprise, but always kept the reader on the edge of the chair.

These novels are fast paced, exciting, and if done correctly the reader will finish the book satisfied and ready for the next adventure. The plots are complex and challenging characters come from all walks of life, the setting can be Texas or the Middle East.

Obviously, I love writing romantic suspense. My debut novel, THE GREEN-EYED DOLL, released December 7th. THE LAST EXECUTION is waiting a release date. HELL or HIGH WATER, the first book in the LOST AND FOUND, INC series is also waiting for a release date.

If you've never read a romantic suspense book, try one. Go along for the ride while the hero and heroine weave their way through death and fear only to emerge stronger because of, and on occasion in spite of, their love for each other. 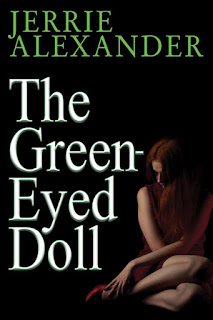 The Green-Eyed Doll
by Jerrie Alexander


Catherine McCoy is running from her past. She's been on the move for a year, hiding the secret and guilt in her heart. When she lands in small-town Texas and meets Sheriff Matt Ballard, he ignites a flame she thought lost forever.

Matt has scars of his own. He left the big city after an undercover operation went bad and his partner was killed. Now, as Matt hunts for a serial killer who paints his victims like porcelain dolls, Catherine becomes a safe haven for him. Two tortured souls finding comfort in each other's arms—until he uncovers her secret, and their bond of trust is broken.

When Catherine disappears, Matt races to find her, fearing the murderer has found his next green-eyed doll. But the killer has a surprise coming. Catherine will fight to the death before she'll be a victim. But will her determination be enough?

His anguish, more than she’d planned for, hit her hard. His dedication and concern, traits she admired, shook her conviction that no man could be trusted. His tenderness, something she’d never had, touched a long-neglected place in her soul.

In that small space of time, where no one else in the world existed, Catherine’s heart found hope. Tears, she’d promised herself never to shed again, slid unchecked down her cheeks. But these tears weren’t because of her pain or grief. She cried because Matt suffered and grieved for the missing woman. She slid her arms around him, stroking his tense muscles.

“Hey, yourself.” He leaned back and studied her face. The warmth behind his eyes returned as he wiped away her tears with the pads of his thumbs. “Were those for me?”

She nodded and emotions swirled in her head. Catherine struggled to regain her perspective. “I have to remove no more tears from the Never list.”

“Why would you hold yourself to such a never?”

“The only thing crying gets you are red eyes.”

“Okay, tough guy. Maybe someday you’ll trust me enough to explain. Why’d you break a rule for me?”

“The worry for Annie Travers in your eyes broke my heart. I’ve never known anyone with your compassion and dedication.”

“Careful.” The corners of his mouth lifted. “You’ll be calling me John Wayne again.”

“Same soul.” She pushed a lock of black hair off his face. He caught her wrist in his hand. 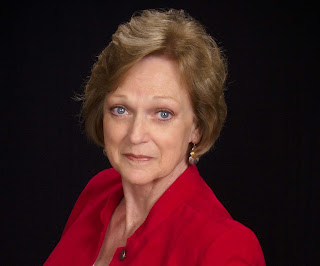 A student of creative writing in her youth, Jerrie set aside her passion when life presented her with a John Wayne husband, and two wonderful children. A career in logistics offered her the opportunity to travel to many beautiful locations in America, and she revisits them in her romantic suspense novels.

But the characters went with her, talked to her, and insisted she share their dark, sexy stories with others. She writes alpha males and kick-ass women who weave their way through death and fear to emerge stronger because of, and on occasion in spite of, their love for each other. She likes to torture people, make them suffer, and if they’re strong enough, they live happily ever after.

Jerrie lives in Texas, loves sunshine, children’s laughter, sugar (human and granulated), and researching for her heroes and heroines.

With just the right touch of menace, Jerri Alexander's The Green-Eyed Doll joins the ranks of top notch romantic suspense.  With good character development, a mystery which will need to be solved, and a psychotic killer on the loose, this book grabbed my attention from the first chapter and never let go.  Set in a small town in Texas, this is definitely a keeper.

When his physically and mentally abusive mother died, all he wants is the green eyed doll.  Only she's not on the shelf - what he finds instead is a wire hanger nailed to the wall and a note which tells him to "get his own doll".  A new serial killer is born.

Fighting for her life Catherine McCoy did what she had to do to survive an abusive husband.  Even though neighbors, family and the law all let Catherine down, she's the one now on the run fearing her past will somehow catch up with her.  With a car on it's last leg and almost broke, Catherine arrives in Butte Crest, Texas and finds herself wanting to stay.  She never planned on becoming the target of a killer or on falling for the local sheriff.

Formerly a big city detective, Matt Ballard has come back to Butte Crest to get over an operation that went terribly wrong.  Sheriff for the last year, he's trying to get over his guilt and get on with his life.  Getting adjusted to a peaceful small town is just what he needs.  Stopping a newcomer to town for a speeding ticket will change his life forever.

While neither Catherine or Matt plans on getting involved, their attraction can't be denied.  Matt knows Catherine is hiding something but he's willing to wait until she learns to trust him, Catherine knows Matt is different from every man she's every known and that she ought to trust him.  She's just afraid he'll judge her once she tells him about all of her past.  I liked how Ms. Alexander developed Catherine and Matt's relationship; while they're both very physically attracted to each other, it's all of the other issues in their life which interfere with their ability to trust.  Learning to trust will become the most important thing in their relationship.

Just as Catherine and Matt begin to trust each other, a serial killer begins leaving his doll-faced victims all over town.  When the press gets involved, and both Matt and Catherine's pasts get exposed, Matt feels hurt and betrayed.

Will Matt figure out the identity of the killer when Catherine becomes his next target?  Just how hard will Catherine fight for her life?  You'll have to read The Green Eyed Doll to find out.  I really enjoyed this romantic suspense and look forward to reading more of Ms. Alexander's work.

FTC Disclosure:  I received a complimentary copy of this book as a part of a blog tour in exchange for a fair and honest review.

Please make sure to leave a comment or question to let Jerrie know you stopped by and to enter her tour wide giveaway.  Jerrie will be awarding a $10 Amazon or Barnes and Noble GC to a randomly drawn commenter at the end of each week, and a $20 Amazon or Barnes and Noble GC to one randomly drawn commenter from all comments during the tour, awarded at the end of the tour.  You can follow all of her tour stops here, the more often you comment, the better your odds of winning.
Posted by Maria at Monday, December 10, 2012