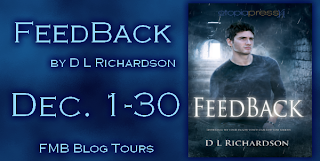 Welcome to my stop on D.L. Richardson's Feedback Blog Tour.  Please make sure to leave a comment or question below to let D.L. know you stopped by.  You can follow all of D.L.'s tour stops here. 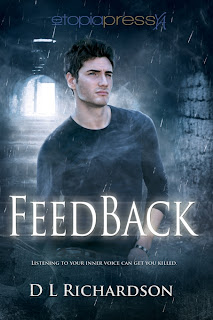 Ethan James, Florida Bowman, and Jake Inala need organ transplants. When they receive the organs of a dead CIA agent, Dylan Black, they take on more than the task of completing the mission of deactivating bombs that threaten millions of lives. Kidnapped, their lives under threat, the memories stored in the CIA agent’s mind begin to awaken within each of them, except the one piece of information they are abducted for - the location of the bombs.

AC/DC’s “Thunderstruck” blared through the speakers. Apt music considering the weather conditions. Rain pounded the windshield of the Lamborghini. Crushed beneath the noisy rain, the music took a beating, too. I flipped the volume control to the max, drowning out the steady slap of water on the roof.

The dark shroud of night cloaked the striped lines to my left and right. Street signs blasted yellow warnings to drivers to slow down on wet roads. I ignored them.

Instead, I pushed the car to 120 miles per hour. Coming around a curve in the road, I flew up on a van and sharply jerked the wheel to avoid ramming the Lamborghini up its rear end. I owed my life to my quick reflexes.

I drove for another half mile at suicidal speeds, drumming my fingers on the steering wheel to the rhythm of the guitar riff. Another half mile. Then another. Just when the buzz of the ride plunged to a level of indifference, the car hit a pothole, veered me across three lanes, and like a punch from nowhere, it was game on.

A tsunami-sized wave of water fell from the sky. Momentarily blinded by the useless wipers, I sucked in my breath when two rows of lights cut through the haze. Two white lights on the bottom and six or more yellow ones on top—the bright circles headed straight at me.

Gritting my teeth, I tightened my grip on the steering wheel. The truck swerved at the last second, missing killing me by about half that length of time. The driver blasted four long bleats of the horn.

I laughed out loud as I spun around.

I accelerated till the car caught up to its former 120 miles per hour. The chorus kicked in, and I helped with the backing vocals. “Thunder. Na-na-na-na-na-na-na-na. Thunder.”

Whether driving under a dome of blue, or a sky darkened by storms like tonight, I liked to push cars to their limit. It didn’t matter what sort of car, but slow cars tended to break apart sooner under extreme pressure. Fast cars handled the punishment of driving at stupid speeds much better.

Speeding made the rush last longer. It filled a void and carried me to a place where I let go of the angst over a waste of a life spent waiting to die of kidney failure. The rush reminded me that seventeen-year-old kids should wish for a professional ice hockey career instead of wishing to still be alive by Christmas.

The song ended, and in that second of silence, my thrill took a dismal nosedive. Images of the hospital I attended every week flickered across my vision. So, I increased the speed. Bad enough the bleak place filled my head and haunted my dreams, but to interrupt my fun—not going to happen.

The next song on the CD kicked in, and it did the trick of hauling me back to the driver’s seat, where I replaced the hospital corridor for a rain-slicked freeway. I figured if I had to die young, I’d do it on my terms. No doubt the doctors would have something to say about this philosophy. If I crashed the car and ended up in the hospital, I’d tell them I reached out to touch life. Better than dwelling on my post pubescent life spent hooked up to a dialysis machine.

I’d probably get pulled over by the cops first, and I couldn’t have that. Aside from speeding, I’d stolen the Lamborghini from a mall parking lot half an hour earlier, and I didn’t have a license.

A crack in my concentration appeared like the lightning bolts streaking the sky. The car drifted into the next lane, and I let it go. A set of lights rushed toward me, and I expertly got the car under control, but at this speed, and despite the car’s sporting capability, the Lamborghini was all over the shot.

Buzzed from pushing the car, I kept going.

At 120 miles per hour, streetlights floated like satiny, white ribbons. The rain-slicked road made it impossible to judge the lines marking the lanes. Curves were hard to anticipate.

Sometimes I over steered; sometimes I didn’t steer enough and had to yank the wheel to the left or right at the last second. Other drivers blasted their horns. I didn’t care about the rules of the road. Rules were for pussies.

For each minute I survived this suicidal cruise, I’d get two points. So far, I’d accumulated over two hundred. Fifty were up for grabs, if I made it home alive. I had a lot to lose if I crashed the car. I had nothing to lose if I killed myself.

I jumped in surprise when a car came up on my left and honked its horn, whizzing by in a blur of chrome. “I don’t think so, buddy.”

I accelerated. If the cops wanted to stop me, they’d have to use air support. Getting myself on TV only added to the thrill of the chase.

Concern over my reckless driving should have registered, but it didn’t. The speedometer now read 140 miles per hour. AC/DC screeched about “Hells Bells,” and the rain didn’t lessen. If I lost control now, I’d smash into the concrete barriers lining the highway. It’d be game over. No way I’d survive the impact. What a shame this last train of thought wasn’t on whether I’d survive or not, but on whether I’d care.

Lightning bolts exploded across the sky and lit up the windshield. In that brief flicker of visibility, I spotted the plane on fire, blocking the highway—and the spaceship blowing up a bridge with luminous green laser beams. I let go of the wheel, idly watching the Lamborghini plow into the concrete barrier. Metal fragments and orange flames danced in front of me. The sound of something exploding boomed through the speakers. The words GAME OVER flashed across the television screen.

The plane had been okay, but the spaceship insulted me. For sure, the makers of the game reckoned it’d be a hoot to throw unrealistic obstacles in my path.

I tossed the Xbox controller aside and scratched my numb backside. My life couldn’t get any worse…might as well go to school. 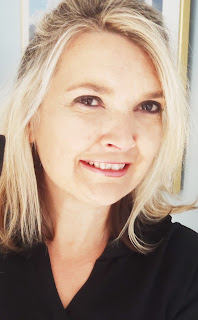 
Music first captured the creative interest of D L Richardson. She got her first acoustic guitar at age ten, and in high school she sang with the school band. When she left school she helped form her own rock band where she sang lead vocals, played bass guitar, and wrote all the lyrics. At age 26 she realized she wanted to write novels for the rest of her life, or die trying, so she sold her equipment, quit pursuing a music career and began writing instead. She currently lives in Australia on the NSW South Coast with her husband and dog. When she’s not writing or reading she can be found practicing her piano, playing the guitar or walking the dog.

Told in first person from the viewpoint of several of the main characters, D.L. Richardson's Feedback is a captivating thriller.  While originally written for the YA crowd, I found this to be as exciting as an adult thriller with non-stop action, well developed characters and a fast paced plot.  Taking place in a fictional suburban setting, Ms. Richardson's story could take place in any modern metropolitan area.

High school students Jake Ethan, Florida Bowman and Jake Inala are all on the organ recipient's list waiting to be matched up to an available organ.  All three teenagers realize that in order for them to get what they desperately need, someone else will need to die.  While they all hate that someone has to die, all three of them want the chance to live a normal life and get on with their dreams; Jake Ethan needs a new kidney if he ever hopes to play hockey again (he'd been his team's star player until he got sick), Florida dreams of being able to dance ballet again (her bad kidney forced her to give up practicing) and Jake Inala needs a new liver if he's ever going to achieve his dream of joining the marines.  All three get the call that a matching donor organ has just become available.

An undercover agent for the CIA, Dylan Black is on a terrorist assignment at a local pharmaceutical company.  Discovering the CEO of the company really is a terrorist is not as surprising as discovering the secret stash of explosives.  Believing he's safe behind his cover, Dylan borrows the company Ferrari to dispose of the bombs.  Being followed by the company's head of security was not a part of his plan.  Neither was being burned by the CIA.

When a roadside accident leads to Dylan's death, and his organs become available, all three teenagers get a second chance at life.  Dylan's ghost gets a chance to make things right with the help of his organ recipients.  Ms. Richardson did an excellent job letting us get to know each of the teenagers and Dylan on his last day.  While I thought it would be confusing to be told the story in all of their viewpoints, I quickly caught onto Ms. Richardson's writing style and found myself captivated by her story.  It actually made the story that much more attention grabbing.

What will happen when all three teenagers begin hearing the voice of Dylan Black and what he wants them to do?  Will they be able to stop the terrorist's plans?  And what will become of the teens when the CIA realizes they could be valuable assets?  You'll have to read Feedback to find out.  I really enjoyed it and can't wait to read more of Ms. Richardson's work.

FTC Disclosure:  I received a complimentary copy of this book as a part of a blog tour in exchange for my fair and honest review.