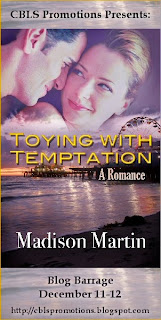 Welcome to my stop on Madison Martin's Toying With Temptation Blog Barrage.  Please make sure to leave a comment or question below for Madison to let her know you stopped by.  You can enter the tour wide giveaway by filling out the Rafflecopter form below. 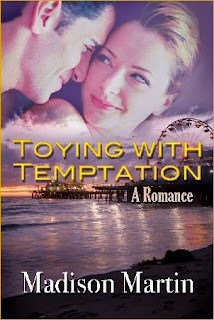 Toying with Temptation
by Madison Martin

Driven, business savvy Hailey Burton, Vice President of Tryton Financial Institute, has been put in charge of running what could be her first ever failure: the company's Christmas Eve toy drive. Toys and Christmas are beyond Hailey's expertise, but when she's offered the chance for the promotion she's been waiting for if she succeeds, her competitive spirit kicks into high gear.

When every company in Los Angeles turns her down, desperation leads her to Quinn Matheson. Ten years ago, Hailey chose a prosperous career over Quinn, but as she falls for him all over again, she can't deny that they make a good team in business...and more. This second time around, is she finally ready to make the leap and become his partner in love?

“Trust me. I never thought we’d be in this…er, position.” Hailey Burton smoothed her hands over the skirt of her brand new Armani suit to keep her hands from shaking. Quinn Matheson could never see how nervous she was. She wouldn’t let him. It would add further humiliation to her unfortunate circumstance, and she felt humiliated enough.

Quinn, the King of Matheson Toys and the picture of confidence, silently appraised her from behind the huge oak desk in his office.

“I mean, we’ve been in every other posi—” She coughed before she finished a sentence that could get her in big trouble. Whatever “positions” she and Quinn may have found themselves in ten years ago, it was too long ago to matter now. Wasn’t it?

She stiffened her spine and felt herself growing hotter by the second. A trickle of sweat began to run down the small of her back. Why fight it? Her brand new, one-of-a kind suit, bought for a special occasion, was headed straight for the cleaners.

He watched her with calculating dark brown eyes, noticing every time she fidgeted or said something stupid. It was beginning to drive her crazy.

“Are you going to say something?”

He shrugged. “It’s your meeting.”

In her eight years of experience, she’d met with and given presentations to presidents and corporate execs from companies all over the world. She always acted with cool confidence in situations that made tough men sweat, and not one minute of it ever fazed her.

What did faze her was sitting here in front of her ex, begging for tens of thousands of toys for her company’s first Christmas toy drive in five years.

Christmas was beyond the limits of her expertise. In her entire life she’d celebrated maybe one or two. Last year, she’d spent the holiday on a conference call closing a deal with a company in Hong Kong. The year before that, she’d been in New York collecting leads for a new account. Her boss knew Christmas was out of her league, but he also knew she never gave her projects less than a hundred and twenty percent, and he’d saddled her with the toy drive despite her protests.

If the promise of moving up the Tryton Financial Institute corporate ladder weren’t waiting for her at the other end of this, she’d have told her boss to forget it. But as usual, the desire for success was stronger than…well, the desire for anything else.

Stronger, even, than the will to never see the man she’d run out on ten years ago. As much as she never thought she’d have the guts to look him in the face again, that promotion was staring her down…waiting. Begging for her to come and get it.

With a good dose of humor, Madison Martin's Toying with Temptation is a fun, holiday themed second chance romance.  With well developed characters, snappy dialogue, and just the right touch of romantic chemistry, I found myself rapidly turning the pages.  Adding a twist on a familiar romantic trope, bride left at the alter, Ms. Martin gives us a chance to see what happens when it's the groom who's left at the alter.

Beautiful and ambitious, Hailey Burton is determined to get another promotion at work.  Used to sacrificing everything, including personal relationships, to get ahead, Hailey isn't prepared for the newest sacrifice she'll have to make to impress her new boss.  Reinstating her company's nationally known toy drive to repair their tarnished image should be easy, getting down to her last choice of corporate sponsors is hard - especially when the president of that company just happens to be the man she left standing at the alter.

Part of a toy family dynasty, Quinn Matheson still hasn't gotten over the young woman who left him standing at the alter.  Newly named president of the family toy business, Quinn can't believe Hailey Burton has the nerve to want a business meeting with him.  Letting Hailey give her sales pitch to get his company to join her company's toy drive is easy - forgiving her for what she did to him in the past, not so much.  Trying to be fair, and wanting to know if there's any chance at figuring out why she left him, Quinn agrees to be her partner for the toy drive - as long as she pretends to be his girlfriend to get rid of some matchmaking friends.

The scenes between Hailey and Quinn are lots of fun, they have great verbal and physical chemistry.  Both driven to succeed, for different reasons, the only issue they really have is trust.  While their love for each other has never gone away, they'll have to learn to trust each other on a level they've never given anyone else.  I really liked how Ms. Martin developed both Hailey and Quinn's characters both on a business and personal level; Hailey really brings out the best in Quinn and Quinn reminds Hailey that life is about more than just work.

Will Hailey learn to put her life and her love for Quinn above her career?  Will Quinn learn to trust his own business decisions and have as much faith in himself as Hailey does?  You'll have to read Toying with Temptation to find out.  I enjoyed this holiday romance and can't wait to read more of Ms. Martin's work.