Virtual Book Tour & Giveaway for The Collector of Dying Breaths by M.J. Rose 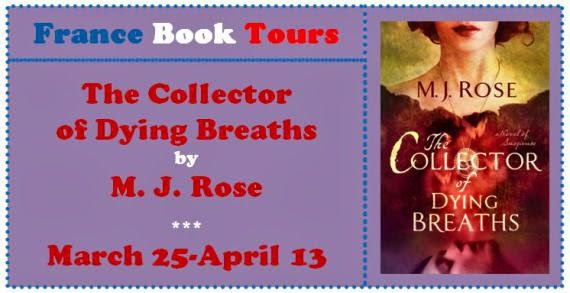 Welcome to my stop on author M.J. Rose’s Virtual Book Tour for The Collector of Dying Breaths, presented by France Book Tours.  Please leave a comment or question for M.J. to let her know you stopped by.  To enter the giveaway for M.J.’s tour wide giveaway (one of two $25 Amazon GC’s), please fill out the Rafflecopter form below.  You can follow the rest of M.J.’s tour here. 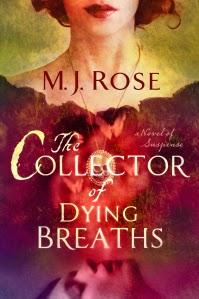 The Collector Of Dying Breaths
By M.J. Rose
Reincarnationist, Book 6

From one of America’s most imaginative storytellers comes a passionate tale of love and treachery, spanning the days of Catherine de Medici’s court to the twenty-first century and starring a woman drawn back, time and again, to the past.

In 1533, an Italian orphan with an uncanny knack for creating fragrance is plucked from poverty to become Catherine de Medici’s perfumer. To repay his debt, over the years René le Florentine is occasionally called upon to put his vast knowledge to a darker purpose: the creation of deadly poisons used to dispatch the Queen’s rivals.

But it’s René’s other passion—a desire to reanimate a human breath, to bring back the lives of the two people whose deaths have devastated him—that incites a dangerous treasure hunt five centuries later. That’s when Jac L’Etoile—suffering from a heartache of her own—becomes obsessed with the possibility of unlocking Rene’s secret to immortality.  Soon Jac’s search reconnects her with Griffin North, a man she’s loved her entire life. Together they confront an eccentric heiress whose art collection rivals many museums and who is determined to keep her treasures close at hand, not just in this life but in her next.

Set in the forest of Fontainebleau, crisscrossing the lines between the past and the present, M.J. Rose has written a mesmerizing tale of passion and obsession. This is a gothic tale perfect for fans of Anne Rice, Deborah Harkness, and Diana Galbadon.

M.J. Rose, is the international bestselling author of 13 novels;Lip Service, In Fidelity, Flesh Tones, Sheet Music, Lying in Bed, The Halo Effect, The Delilah Complex, The Venus Fix,The Reincarnationist, The Memorist, The Hypnotist, The Book of Lost Fragrances, and Seduction.
Rose is also the co-author with Angela Adair Hoy of How to Publish and Promote Online and with Randy Susan Meyers of What to Do Before Your Book Lauch.

She is a founding member and board member of International Thriller Writers and the founder of the first marketing company for authors: AuthorBuzz.com. She runs the popular blog; Buzz, Balls & Hype.

Getting published has been an adventure for Rose who self-published Lip Service late in 1998 after several traditional publishers turned it down. Editors had loved it, but didn’t know how to position it or market it since it didn’t fit into any one genre.

Frustrated, but curious and convinced that there was a readership for her work, she set up a web site where readers could download her book for $9.95 and began to seriously market the novel on the Internet.

After selling over 2500 copies (in both electronic and trade paper format) Lip Service became the first e-book and the first self-published novel chosen by the LiteraryGuild/Doubleday Book Club as well as being the first e-book to go on to be published by a mainstream New York publishing house.

Rose has been profiled in Time magazine, Forbes, The New York Times, Business 2.0, Working Woman, Newsweek and New York Magazine.
Rose has appeared on The Today Show, Fox News, The Jim Lehrer NewsHour, and features on her have appeared in dozens of magazines and newspapers in the U.S. and abroad, including USAToday, Stern, L’Official, Poets and Writers and Publishers Weekly.

Rose graduated from Syracuse University and spent the ’80s in advertising. She was the Creative Director of Rosenfeld Sirowitz and Lawson and she has a commercial in the Museum of Modern Art in NYC.  She lives in Connecticut with Doug Scofield, a composer, and their very spoiled dog, Winka.

Fascinated with Catherine de Medici since grade school, I jumped at the chance to read and review The Collector of Dying Breaths by M.J. Rose.  While the sixth book in the Reincarnationist series, this book can be read and enjoyed on its own as Ms. Rose provides more than enough of the characters background for the reader to get a full grasp of their story so far.  Weaving a tale full of action, passion, and obsession, Ms. Rose takes the reader on a dark ride as her characters work to discover the secret recipe to immortality.

Determined to get over a personal tragedy, mythologist Jac L’Etoile learns of René le Florentin, an alchemist trained in a monastery, who as Catherine de Medici’s perfumer and private poison creator, went from a life of poverty to a life as the greatest perfume creator in the French court.  Throwing herself into her work, Jac uncovers René’s secret obsession with creating a formula for reincarnation.  Becoming obsessed with her research, Jac’s path leads her back to Griffin North, her former lover and a linguist, who has already begun translating René’s work.  Using Jac’s rare talent to see the past lives of others, Jac and Griffin find themselves on a journey back through time that could prove dangerous to their loved ones and themselves.

Taking us back to the early 1500’s, Ms. Rose provides us with a picture of life in Catherine de Medici’s court in Paris.  Filled with beauty, wealth and treachery, Ms. Rose paints a vivid picture of what life was like for René as he collected the “dying breaths” of people he believed he would be able to use on someone else.  As Jac shadows René’s movements in the court, and uncovers everything he did for Catherine de Medici (creating special poisons), she realizes how difficult and dangerous her task has become.  Ms. Rose does a really good job developing all of the background characters and bringing everything to life in a way the reader will understand.

Will Jac uncover the recipe she’s looking for? Will her travels give her the chance to fix her relationship with Griffin and have the life she’s always dreamed of? You’ll have to read The Collector of Dying Breaths to find out.  I enjoyed it and look forward to reading more of Ms. Rose’s work.

Please read the following rules carefully. This giveaway is courtesy of the tour organizer and author and runs on various of the other blogs in this tour. Visit the tour page here to hop the other blogs and get more chances to win.

You can win ONE ENTRY in a giveaway of an Amazon gift card with the value of $25.

Questions? Leave them in the comments and I will get back at you.
a Rafflecopter giveaway


*FTC Disclosure: I received a complimentary copy of this book courtesy of the publisher via NetGalley in exchange for a fair and honest review.
Posted by Maria at Monday, March 31, 2014