Interesting question. I admit, when I’m writing, I’m not really thinking about tropes as much as the story that’s in my head at the moment. But now that I think about it, Cowboys & Kisses is a true-blue starting over story.  Allie, the heroine, is thrown into an alien world, one she can’t stand, without any hope of rescue. She fights it, fights everything, before she realizes that maybe this new life is something to embrace instead of fight. Toss in a tad of ‘coming of age’ and a dash of ‘finding yourself’ -- that’s Allie’s journey.

My hero, Wyatt, is anything but a bad boy. He’s a real cowboy, all manners and responsibility--and completely adorable too.  If anything, she’s sort of the bad-one that he needs to stay away from, or so she thinks. So, the bad-boy/forbidden fruit thing wasn’t really a good fit.

I wanted Allie & Wyatt’s story to be ‘real’, for readers to feel like they were real teens dealing with real experiences. That’s what YA readers want--to connect. Honestly, I think that’s what all readers want--to get lost in the story and the lives of the characters. I hope readers enjoy getting lost in Black Falls, Texas, hanging out with Allie, Wyatt, and Dax.

Thanks so much for having me!!! Allie had big plans for the future. Falling for a cowboy wasn't part of it.

1. Get out of Black Falls Texas - aka Redneck Hell
(Graduation was eight months away. After that, she was out of there.)

2. Avoid Wyatt Holcomb at all costs.
(Except he was everywhere and kind of hard to ignore since he was hot-and a really nice guy.)

3. Avoid her parents.
(Shouldn't be too hard to do since her father hated her and her mother pretended nothing was wrong.)

4. Stop thinking about Wyatt.
(Which would be a lot easier if he wasn't so sweet... and he'd keep his shirt on.)

5. Decide what she really wants.
(Instead of holding onto the past and the guilt.)

Wyatt was carrying me. I like this dream…
I’m glad I was sleeping. If I wasn’t, I’d have to wake up. He’d put me down. I’d have to get pissy with him—because that’s what I did, acted pissed. Right now, I didn’t want him to put me down. And I was way too warm and comfortable to get pissy.
The front door opened. We were going inside, up the stairs…
I burrowed in a little, to breathe against his chest. His really strong, no-give chest. God, he smells good. Really really good.
I turned, pressing my cheek against him. His heartbeat picked up…a lot. And his arms tightened, holding me more surely. Something about that, the way he was holding me, made my heart thump. Maybe I should admit I was awake?
I heard the floorboard creak. We were almost to my room. Which was good. So why was I feeling panic?
Because he’ll put me down and leave…
My hand gripped his shirt front. I needed…wanted to hold on to him, to keep him here, protecting me, holding me. And for some new and bizarre reason, I felt sort of…frantic about it. “Allie?” His voice was soft, his breath stirring the air by my ear.
I didn’t say anything. What was I supposed to say? I’m awake but don’t put me down? You smell really good…and you feel even better? Yeah, that wouldn’t go over very well.
Or would it? What if he was cool with it? What if he stayed? Did I want him to stay? I swallowed.
I was being lowered, slowly. I felt the muscles in his chest and arms and shoulders move against me and felt…breathless and hot and confused and… I’m so in trouble.
My bed was soft beneath my back, but before his arms slipped out from under me I opened my eyes.


Sasha is part gypsy. Her passions have always been storytelling, Hollywood, history, and travel. It’s no surprise that her books include a little of each. Her first play, ‘Greek Gods and Goddesses’ was written for her Girl Scout troupe. She’s been writing ever since. She loves getting lost in the worlds and characters she creates; even if she frequently forgets to run the dishwasher or wash socks when she’s doing so. Luckily, her four brilliant children and hero-inspiring hubby are super understanding and supportive. 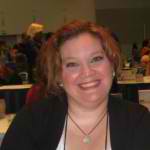 You can stalk, I mean find Sasha here

Oh, Did you know that Sasha has a Street Team? She does! If you love/like her books and want to help support her join the Street Team. What would you have to do if you join? Let's see...

1.) Have Fun
2.) meet other people with common interest
3.) you get first dibs on info, snippets, excerpts and even get to review in advance!!
4.) your input! We might ask you to name her next cowboy! LOL
5.) there will be missions where we ask you to share links and information, but we provide you with all the info so it's easy as pie. Or cake! What ever you prefer!

a Rafflecopter giveaway
Posted by Maria at Tuesday, March 25, 2014