Get it at Amazon

From award-winning author Susannah Sandlin comes a heart-pounding romantic thriller that pits a quick-witted scientist and a scarred ex–combat diver against a ruthless billionaire treasure hunter with ties to the White House.

When biologist Gillian Campbell makes an offhand comment about a family curse during a TV interview, she has no idea what her words will set in motion. Within days, Gillian finds herself at the mercy of a member of the C7, a secretive international group of power brokers with a dangerous game: competing to find the world’s most elusive treasures, no matter the cost, in money or in lives.

To save her family, Gillian teams up with Shane Burke, a former elite diver who’s lost his way, navigating the brutal “death coast” of the North Atlantic to find what the collector seeks: the legendary Ruby Cross of the Knights Templars, stolen by Gillian’s ancestor and lost at sea four hundred years ago.

Release Info- LOVELY, DARK, AND DEEP is being released in eight multi-chapter weekly episodes through Feb. 18. The current price for the entire eight-episode novel is $1.99 through Feb. 18 and will increase to $3.99 for Kindle afterward. The print and audio editions will be released on May 13, 2014, and will be available at venues other than Amazon.

He wasn’t sure what woke him, but the first thing Shane Burke saw when he cracked open his eyelids was the bottle of Jack Daniel’s, tipped over and resting on its side. He could’ve sworn he finished it off last night but there was at least an inch of rich amber liquid still resting inside.
Good. Now he didn’t have to wonder what he’d have for breakfast.
The second thing he saw was a great pair of legs. Well, technically, a great pair of ankles above a pair of leather sandals, and then the legs.
Obviously, he was starting his Saturday morning with hallucinations.
Only one good solution for that. He dangled an arm off the side of his bed and almost had his fingers wrapped around the neck of the bottle when one of the leather sandals kicked his buddy Jack Daniel’s under the bed, clipping his hand in the process.
“Ow.” Hallucinations didn’t take his booze and kick him in the knuckles.
Ignoring the throbbing in his hand and the stabs of hangover agony behind his eyeballs, Shane rolled onto his back and squinted at the rest of his non-hallucination.
Shoulder-length hair that fell in a sheen of dark chestnut brown, fair skin, fierce brown eyes, red lips compressed in a tight line, black skirt and white blouse, big briefcase-style purse. Had he picked her up at Harley’s last night? If so, he had to cut back on the sauce.
“Sorry,” he mumbled. “I forgot your name.” Pity, ’cause she was a hot little number, way classier than the regulars at Harley’s. It’s not like he got laid so often that he could afford to forget it when he did.
“We haven’t met.” She propped her hands on her hips and muttered something that sounded like, “And you’re supposed to help me?”
Help her with what? Wait, maybe she was a charter. Had he chartered The Evangeline out to a tour group or fishing party today? Surely he’d remember if there was money coming in.
Color him officially confused. He struggled to a seated position and gave her another look. “What am I supposed to help you with?”
She crossed her arms and raked a ball-shriveling gaze the length of his body. “I came here to offer you a job, but I don’t think you’re up to it.”
He tugged the sheet up in self-defense. “I’m not at my best. Ever consider making an appointment? Not dropping in at the crack of dawn?” He had no idea what time it was but it couldn’t be that late.
“It’s past noon. And I didn’t figure, given your financial situation, that you’d be so picky about what time of day someone offered you money.” She shook her head. “Never mind. This was a mistake.”
She banged her head on the low doorway out of the master cabin, which served her right, the sanctimonious shrew. 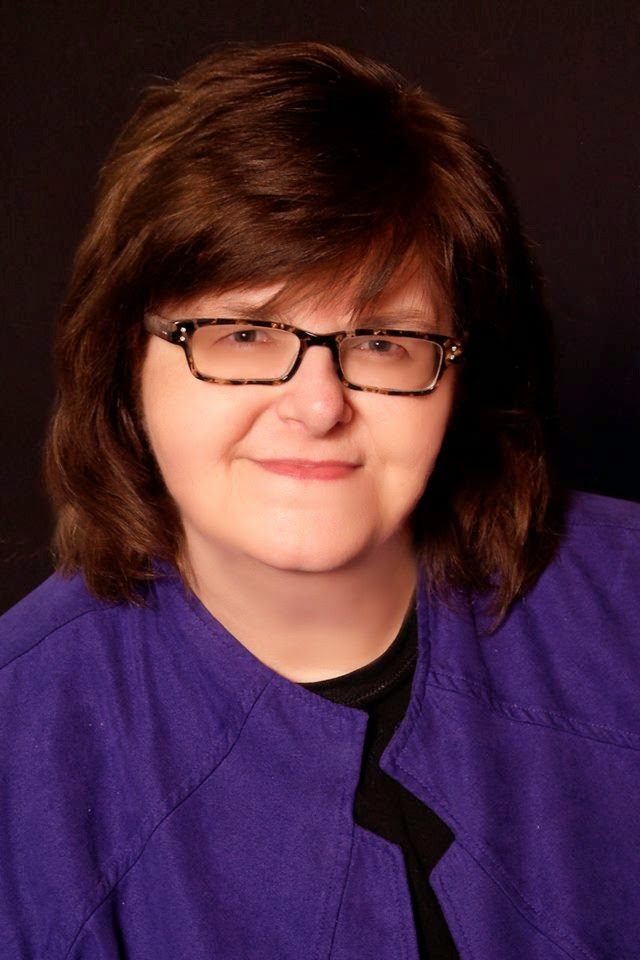 Susannah Sandlin writes paranormal romance and romantic thrillers from Auburn, Alabama, on top of a career in educational publishing that has thus far spanned five states and six universities—including both Alabama and Auburn, which makes her bilingual. She grew up in Winfield, Alabama, but was also a longtime resident of New Orleans, so she has a highly refined sense of the absurd and an ingrained love of SEC football, cheap Mardi Gras trinkets, and fried gator on a stick.

She’s the author of the award-winning Penton Legacy paranormal romance series, a spinoff novel, Storm Force, a standalone novelette, Chenoire, and a new romantic thriller series, The Collectors, beginning this month with Lovely, Dark, and Deep. Writing as Suzanne Johnson, she also is the author of the Sentinels of New Orleans urban fantasy series. Her Penton novel, Omega, is currently nominated for a 2013 Reviewer’s Choice Award in Paranormal Romance from RT Book Reviews magazine.

Stay Tuned for My Review which will post later this evening

Feb 21 Spotlight and review
Hooked In a Book
http://hookedinabook.blogspot.com

March 19 Spotlight and review
Queen of All She Reads
http://queenofallshereads.blogspot.com