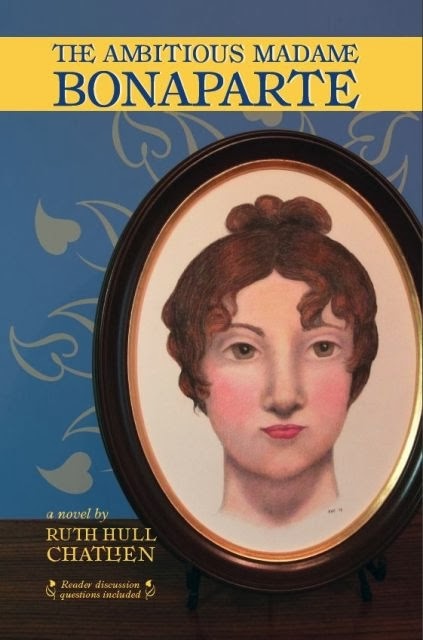 As a clever girl in stodgy, mercantile Baltimore, Betsy Patterson dreams of a marriage that will transport her to cultured Europe. When she falls in love with and marries Jerome Bonaparte, she believes her dream has come true—until Jerome’s older brother Napoleon becomes an implacable enemy.  Based on a true story, The Ambitious Madame Bonaparte is a historical novel that portrays this woman’s tumultuous life.

Elizabeth Patterson Bonaparte, known to history as Betsy Bonaparte, scandalized Washington with her daring French fashions; visited Niagara Falls when it was an unsettled wilderness; survived a shipwreck and run-ins with British and French warships; dined with presidents and danced with dukes; and lived through the 1814 Battle of Baltimore. Yet through it all, Betsy never lost sight of her primary goal—to win recognition of her marriage.

I’ve always enjoyed reading about women who are ahead of their time; women who impact society and improve themselves, the role of women and how women are perceived so I looked  forward to reading The Ambitious Madame Bonaparte, a story about Elizabeth “Betsy” Patterson Bonaparte, the woman who became the wife of Napoleon’s younger brother, Jerome.   Knowing nothing about Napoleon’s family, other than they enjoyed a positions of wealth and power while Napoleon was in control, I was pleased by the author’s, Ruth Hull Chatlien, attention to the historical and political details throughout the retelling of Betsy’s life.  While not every character in the book is likeable, Ms. Chatlien does a wonderful job bringing Betsy, Jerome and many of the prominent people of their day to life.

The oldest daughter of a socially, politically and wealthy businessman, Elizabeth “Betsy” Patterson, was born and raised while America, the nation, was being formed.  While she and her family lived in Baltimore, they regularly entertained and were visited by prominent members of our early government.  A well educated young woman, and beautiful to boot, Betsy was full of life, adventure and a desire to be recognized for her wit and opinions.  Somewhat hampered by the role of women at the time, her own mother had limited power in her own home due to her husband’s dominating personality and the expectations society placed on women, Betsy was determined to be more.

Ms. Chatlien does a wonderful job developing Betsy’s character as she ages throughout the book; she brought out Betsy’s strengths and weaknesses in equal light and lets the reader develop their own opinion about her.  One element of Betsy’s character which Ms. Chatlien showcases is Betsy’s love and devotion to her husband and her family, while Betsy and Jerome had their differences and occasional disagreements, Betsy truly loved Jerome and their marriage became the reason for her life.

While Betsy and Jerome’s marriage was accepted and even lauded as a social coup in the U.S., Betsy is treated to a hard dose of reality when she and Jerome travel to France and Napoleon refuses to acknowledge their marriage.  It didn’t help that Jerome had neglected to inform his new wife that he wasn’t of legal age to marry without his family’s consent (he was only 19 when they married and the legal age was 21).  While Napoleon dismissed Betsy, “because I am an American and a woman”, she fought to get her marriage recognized and to make political alliances.  Set against the backdrop of world events, the Battle at Waterloo and the War of 1812, Betsy deals with her father’s disapproval, those who criticized her tenacious social mobility and daring French fashions.

A vivid, well written historical fiction, The Ambitious Madame Bonaparte by Ruth Hull Chatlien introduced me to a strong woman who proved she had the right and ability in shaping her society.  Showcasing that charm, wit, a flair for fashion and a healthy dose of political suaveness are strong weapons in a woman’s arsenal, Betsy was a feminist before her time.  I look forward to reading more of Ms. Chatlien’s work.