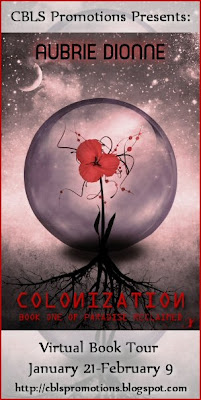 Welcome to my stop on Aubrie Dionne's Virtual Book Tour for Colonization (Paradise Reclaimed, Book 1).  Please make sure to leave a comment or question below for Aubrie to let her know you stopped by.  You can enter her tour wide giveaway (Prize is a 2 Custom “Colonization” Key Chains. Contest is tour-wide, open internationally and ends Feb 14) by using the Rafflecopter form below.  You can follow her tour here, and find my review of Colonization (Paradise Reclaimed, Book 1) here.

How Colonization ties into the New Dawn Series by Aubrie Dionne


I’ve just finished the longest and most involved series of my life thus far: a four book, new adult space opera series called The New Dawn series, published by Entangled Publishing. The last installment came out this fall, September 11th. In between writing books 1 and 2, I took a break and experimented with Colonization: Paradise Reclaimed, my first young adult space opera. This story is directly tied to characters from the book 1 in my New Dawn series. In fact, some of them, even though it’s three hundred years later, are still living!

The main character of Colonization: Paradise Reclaimed is Andromeda Barliss, the great granddaughter of Astor Barliss, the BAD GUY from Paradise 21. You heard me right: her grandpapa is the BAD GUY from the previous book. When Colonization begins, he’s had three hundred years to reflect on his life, and he isn’t quite so bad anymore. You wouldn’t believe what three hundred years of self-reflection can do to a person!

Astor Barliss is still one of the most complication characters I’ve ever written. He wants to help Andromeda, but he also doesn’t want her to repeat his past mistakes. This book completes his character arc, at the same time starting a new arc in that of his great granddaughter.

You’ll have to read both Paradise 21 and Colonization: Paradise Reclaimed to see the change in Astor Barliss and how it affects his choice with Andromeda. 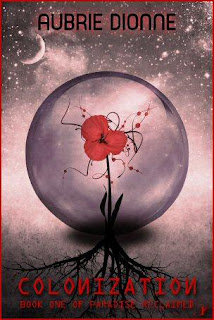 
Blurb
Andromeda has spent all seventeen years of her life aboard a deep space transport vessel destined for a paradise planet. Her safe cocoon is about to break open as Paradise 21 looms only one month away, and she must take the aptitude tests to determine her role on the new world and her computer assigned lifemate. As a great-granddaughter of the Commander of the ship, she wants to live up to her family name. But, her forbidden love for her childhood friend, Sirius, distracts her and she fails the tests. The results place her in a menial role in the new colony and pair her with Corvus, “the oaf”.

But when Andromeda steps foot on Paradise 21, her predestined future is the least of her worries. Alien ghosts from a failed colonization warn her of a deadly threat to her colony. And when Sirius’s ship crashes on the far ridge in an attempt to investigate, she journeys to rescue him with Corvus.

Andromeda now must convince the authorities of the imminent danger to keep her protect her new home. What she didn’t expect was a battle of her own feelings for Sirius and Corvus.

Can she save the colony and discover her true love?


The pollen released in my fall was so thick it obscured my vision, and I coughed, trying to clear my lungs and decide if I should run. The humanoid figure glided closer as if it floated above the turf. It had two bumps above each shoulder. At first I thought it was a backpack, but then I wondered if the lumps were folded wings.

Was it an angel? Had I died in the jungle? Been poisoned by some unidentified species or pulled into the stomach of a man-eating flower I couldn’t even name? Trillium something. My mind whirled as the being moved toward me and came into focus. It wasn’t an angel at all.

It was an alien. 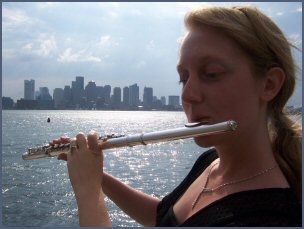 Aubrie grew up watching the original Star Wars movies over and over until she could recite and reenact every single scene in her backyard. She also loved The Goonies, Star Trek the Next Generation--favorite character was Data by far--and Indiana Jones. But, her all time favorite movie was The Last Unicorn. She still wonders why the unicorn decided to change back to a unicorn in the end.


Aubrie wrote in her junior high yearbook that she wanted to be “a concert flutist” when she grew up. She majored in flute performance at the University of New Hampshire on a full scholarship, then secured two teaching jobs at a University and a local community music school. While playing in orchestras and teaching, stories popped into her head, and she used them to make the music come alive for her flute students. Her students said they were so good, she had to write them down! Maybe they were right, who knows? Two careers seems to keep her busy. For now.

She is represented by Dawn Dowdle and writes sweet and adventurous fantasy, science fiction, and contemporary romance. 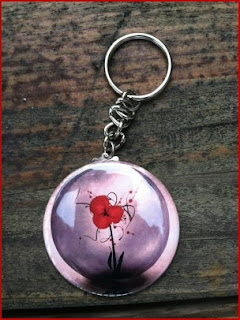 a Rafflecopter giveaway
Posted by Maria at Friday, February 08, 2013