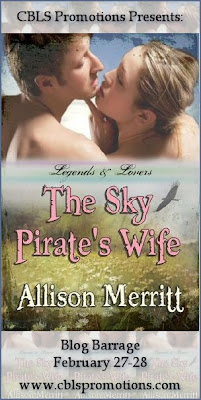 Welcome to my stop on Allison Merritt's Blog Barrage for The Sky Pirate's Wife.  Please make sure to leave a comment or question for Allison below to let her know you stopped by.  You can fill out the Rafflecopter form below to enter her tour wide giveaway, and follow the blog barrage here.  MY REVIEW FOR THIS BOOK WILL BE POSTED LATER TODAY.
___________________________________________ 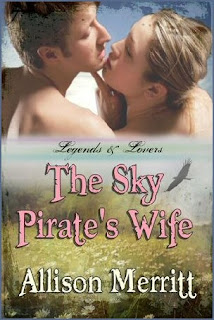 After a tragic airship wreck, Captain Alwin van Buren makes a drastic decision to obtain a wealthy bride in order to save his flagging business. He meets his match in Sophie Barnes, heiress to an airship empire. After he seduces her and ensures their marriage—igniting a rivalry with her godfather—he learns the green-eyed beauty is as headstrong as he is.

Sophie knows Van Buren's reputation based on a series of dime novels written about his adventures. Determined to be more than an end to a means, she despises him for luring her into marriage. In fiction, he's a no-nonsense captain on the verge of piracy, but the flesh-and-blood man wins her heart by proving she's worth more to him than her money.

Their love is threatened when Sophie learns Van Buren's airship accident was a result of mythical creatures. Winged predators that appear to have a grudge against him, a fact he deliberately hid by accusing her godfather of sabotage. If she can forgive him for that, they still have to face the danger when they're cornered and at the mercy of beasts and the evil that controls them.

Warning: This title is intended for readers over the age of 18 as it contains adult sexual situations and/or adult language which may be considered offensive to some readers.

“I insist. Consider it your first lesson in flying.”

“We'll crash. I'll mess up the instruments,” she warned. “I don't want to be responsible for bringing down an entire airship.”

“I won't let that happen.” He let go of the wheel and captured her hand, pulling her closer. She had no hope of resisting and didn't try very hard. He put his hands on her shoulders, positioning her in front of him. “Left hand at ten o'clock, right hand at two o'clock.”

She did as he asked, feeling awkward and jittery. “Like this?”

“Grip it harder. Firm, but comfortable. It will pull a little when they set us free from the lash lines.” Van Buren placed his hands over hers. His chest brushed against her back.

Sophie's breath caught in her throat. He wouldn't try to kiss her where everyone could see, would he? A spicy bay rum fragrance surrounded him; the scent of a man who spent his life carrying exotic cargo. His hands almost engulfed hers, gentle but firm enough to ensure she wasn't about to flee. As if she could force herself. She tried to toss the thoughts out. Surely he was focused on flight, not on her.

“I don't think this is a good idea,” she whispered.

“You'll be surprised.” He sounded so confident. A rumble started behind them and the ship shook under her feet.

Her heart was in her throat. “What is it?”

“The propellers. You'll get used to it. Now, hold tight.”

She didn't have a choice, because his hands still covered hers. The wheel tipped to one side and he straightened it. The ship groaned and Sophie's heart leaped when she saw the dock slip past them.

They floated above a level field where long grass grew. In the distance, two ships were coming in, but no one else was leaving. Alone in the sky, they climbed higher steadily.

He pulled open a drawer beneath the helm and flipped through a logbook. “We chart the weather in this. It helps us figure average temperatures throughout the years. Whoever received the last weather report wrote down sunny for today, overcast tonight. Maybe some rain tomorrow, but nothing more than light showers.”

Sophie looked at the book in his hands. No one held the wheel but her. “Alwin! You let go.”

He grinned. “You're doing fine, zoete. Keep her steady, she's climbing on her own.”

It wasn't the idea of being the only thing that stood between them and another flaming airship wreck that made her tremble. It was his smile. The kind that all women yearned to receive from a handsome man. “You should really take the wheel.”

“My hands are full.” He waved the logbook at her, but replaced it and remained standing beside her. “You're doing very well.”

“Are you certain?” The wind blew her hair and snagged her skirt. The horizon filled her line of sight and she suddenly understood the thrill of piloting a ship. It was like having the same freedom as a bird. She could point the ship in any direction and go wherever she pleased. Nothing had ever made her feel so alive. Except kissing Van Buren. Her head turned his direction like it was on a spring. She covered the sudden movement with a laugh. “I think I'm in love with your ship.”

His eyes darkened from icy gray to the shade of wet concrete. He lowered his mouth to her ear again and put his hand on her back. “Flying is a great deal like making love, Sophie.”

She nearly melted at her name on his lips. “W-why do you say that?”

“It's instinctual. The mind and body work together, creating a moment of beauty. The first time is a little frightening, but once you find the rhythm, the proper technique, you have something very enjoyable on your hands. Something that you feel deep within your soul. Something that you never want to give up. With the right person, the kind of relationship you'd die to protect.”

Sophie couldn't find her voice. She stood stock still, staring straight ahead, too embarrassed to look at her husband. His hand moved up her back, over her shoulder until he cupped her jaw and turned her head so that she was looking at him. Their lips were so close together, she thought he'd kiss her again. 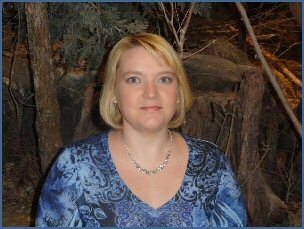 A life-long love of reading turned Allison Merritt into an indie author who writes historical, paranormal and fantasy romances, often combining the sub-genres. She lives in a small town in the Ozark Mountains with her husband and dogs. When she's not writing or reading, she hikes in national parks and conservation areas.


Prize is a $10 Amazon GC and Necklace (picture attached). Due to nature of prize, contest is open to US residents ONLY and ends Mar 5. Must be 18 years of age or older to enter. 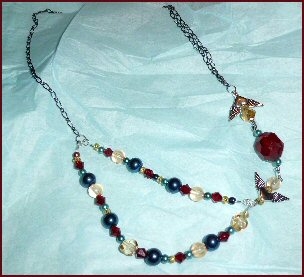