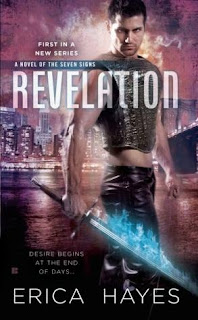 
A fallen angel with a mission and a medical examiner who's lost her faith are fighting for their souls in a glittering, near-future Manhattan...

Blind faith is for fools. That's what Dr. Morgan Sterling believes. And she's going to prove it by curing the zombie plague ravaging her city's slums. She's certain it's not a sign of the End of Days, but a nasty disease—until an angel appears in her morgue in a flash of glory.

Luniel is not just a fallen angel. He's a powerful warrior sworn to fight evil in hopes of a chance at redemption. He's after the demon princes who are stealing the seven vials of holy wrath which, when perverted, will unleash eternal hell on earth.

To stop the plague, Luniel needs Morgan's help, and her faith. But Morgan believes science is their salvation. If the zombie plague is a demonic curse—and if Luniel is true—he’ll have to prove it. Even if he loses his heart to true love or his soul to Hell...

A dark urban fantasy loosely based on the Apocalypse, Revelation by Erica Hayes starts out slowly and gradually picks up speed.  Filled with fallen angels, zombies and demons, Ms. Hayes sets her story in a future/alternate Manhattan known as Babylon.  With colorful descriptions, plenty of physical action and a forbidden romance, this story is sure to grab the readers attention.

A fallen angel, or "Tainted", Luniel is disturbed by physical changes he's beginning to see in the world.  Babylon has become the capital of crime, a new virus is targeting humans and turning them into zombie like creatures, and Babylon's bay has turned to blood and is full of dead fish.  Unable to contact his brother, still one of the regular angels, for over a week, Luniel is afraid one or more of the "seven deadly vials" spoken of in Revelations, the final chapter of the bible,   may have been stolen or captured from a "Vial Guardian" and been twisted by a demon.  Discovering his brother's body in the city morgue confirms his suspicions that somethings gone very wrong.

Trying to understand a new disease no one has a cure for, Medical Examiner Dr. Morgan Sterling had little faith in humanity and doesn't believe in any one's version of God.  Trusting only in science and things she can prove, Morgan can't believe her eyes when she opens a body bag in the morgue.  Skeptical and suspicious, Morgan is unprepared to be rescued by Luniel when she becomes caught in a battle between heaven and hell.  She never planned on falling in love with a fallen angel.

The scenes between Luniel and Morgan are full of emotional angst, sharp dialogue and smoldering heat.  Unable to trust each other at first, Luniel and Morgan must overcome their distrust of each other and choose a side in the coming war. Ms. Hayes did an okay job developing these two characters but while their sexual chemistry is hot and off the charts, I had a hard time dealing with their emotional issues.  Luniel had a hard time letting go of his experiences with women in the past and went on and on about not being good enough for Morgan, while she went back and forth on whether or not  she could trust him even though she becomes physically involved with him.

The first book in a new series, Ms. Hayes's characters have begun the battle to end all battles.  Who the victor will be may very well depend on the "Tainted" angels.  Want to find out what happens between Luniel and Morgan at the end of their book?  You'll have to read Revelation to find out.

FTC Disclosure: I received a complimentary copy of this book as a part of a book tour in exchange for a fair and honest review.
Posted by Maria at Friday, February 01, 2013