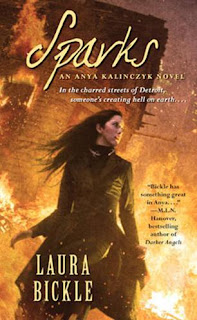 Anya Kalinczyk is the rarest type of psychic medium, a Lantern, who holds down a day job as an arson investigator with the Detroit Fire Department—while working 24/7 to exterminate malicious spirits haunting a city plagued by unemployment and despair. Along with her inseparable salamander familiar, Sparky, Anya has seen, and even survived, all manner of fiery hell—but her newest case sparks suspicions of a bizarre phenomenon that no one but her eccentric team of ghost hunters might believe: spontaneous human combustion.

After fire consumes the home of elderly Jasper Bernard, Anya is stunned to discover his remains—or, more precisely, a lack of them; even the fiercest fires leave some trace of their victims—and she is sure this was no naturally occurring blaze. Soon she’s unearthed a connection to a celebrity psychic who preys on Detroit’s poor, promising miracles for money. But Hope Solomon wants more—she’s collecting spirits, and in a frantic race against time, Anya will face down an evil adversary who threatens her fragile relationship with her lover, her beloved Sparky’s freshly hatched newts, and the wandering souls of the entire city.

Sparks, the second book in the Anya Kalinczyk series, begins a short time after the end of the events in the previous book.  Once again Ms. Bickle drew me into Anya's strange and unique world and I didn't want the story to end. Introducing some new characters, both human and paranormal, Ms. Bickle continued the world building which makes this series so unique.

Trying to solve a series of strange fires, which have the appearance of spontaneous human combustion, which are spreading across town, Anya is still trying to balance her human and her secret paranormal job.  When Anya identifies left over magic at the latest victims house, it turns out the man had a loose connection to Ciro, the head of the DAGR (Detroit Area Ghost Researchers).  Uncomfortable with the way her investigation is leading, Anya also has to deal with Sparky's (her salamander familiar) changing behavior.  She never planned on having to make a trip down the River Styx or on Sparky becoming a parent.

As Anya begins to suspect a local con-woman turned television preacher of being involved in dark magic and causing all of the fires, she finds herself  dealing with her attraction to a fellow ghost fighter and with Sparky's need to nest over his eggs.  Spending money on baby supplies has just become another weird thing in Anya's life.  When the fight becomes personal, her house is burned down in a dark magic attack, Anya finds herself rescuing Sparky and his newly hatched newts and having to temporarily move in with a friend who's a witch.

Discovering she'll have to take the battle against the dark magic user to the astral plane and make a visit to Hell is dangerous but apparently Anya's only choice.  I really liked how Ms. Bickle continued developing the paranormal world Anya has to deal with and began to address Anya's left over issues from her childhood.  Adding a touch of romance also gave Anya a touch of humanity she needed very much.  It made it even easier to relate to her since she's got so much bottled up.

Will Anya, Sparky and the newborn newts be strong enough to fight their new enemy?  And just who is the Ferryman she has to pay to get to her destination?

You'll have to read Sparks to find out.  I really enjoyed it and I think you will to.  My question for Ms. Bickle is if we'll get more adventures with Anya and Sparky - I'd really like to see more books set in this world.

FTC Disclosure:  I received a complimentary copy of this book in exchange for a fair and honest review as a part of a book tour.
Posted by Maria at Saturday, February 02, 2013