Review - Rocked Under by Cora Hawkes 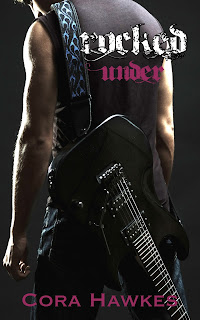 Synopsis: Falling in love isn't always easy or pleasant. The intense and angst-filled

story of Emma and Scott is a painful, gut-wrenching and exhausting portrayal of

Nineteen year-old Emma Harrington’s number one rule is; Never give your heart away to a man, no matter what. That lesson was learned early on in her life and she will never forget it.

Starting over in the USA, Emma starts college with her cousin, Ashley. She is finally free to do and live how she wants and no man will ever rule her decisions or emotions again.

That is until Scott Mason walks on stage…

Intense, bad boy Scott is the lead singer in a local and popular rock band. Ladies man and Ashley’s longtime friend, Emma is instantly drawn to him, even though he is everything she hates and needs to stay away from in a guy. He treats females like he does a cigarette; light it, use it, and lose it.

For her cousin’s sake, she makes an effort to get along with Scott. She soon discovers that there is more to Scott which makes him even more dangerous in her eyes. Underneath the façade of friendship; jealousy, obsession, fear and insecurities, fester and battle it out as she fights her attraction and history from repeating itself.

One thing she knows for sure is that if she breaks her rule, it may destroy her.

In a song Neil Sedaka sang "They say that growing up is hard to do" and that is never more true than in Cora Hawkes Rocked Under, a tale of two young lovers who are both seemingly destined to hurt and love each other.  With likable characters, plenty of emotional angst and an engaging plot, Ms. Hawkes captured my attention from the first page and never let go.  While not usually a fan of the "Rock Bad Boy" romance - been there, done that, burned the album- Ms. Hawkes has made a fan out of me!

Nineteen year old Emma Harrington thought she left her troubles behind her when she moved to the US to live with her cousin Ashley (aka Ash).  Planning to start over, Emma knows only one thing - she'll never let any man own her heart - she's seen and experienced first hand what happens when it gets broken.  Starting college and making new friends should be enough of a challenge for her.  She just never planned on her cousins friend being a "rock" bad boy or on him living upstairs.

Scott Mason is the front man and lead singer for "Rocked Under", a local bar band that's on the rise.  A guy who's used to changing women as often as he changes underwear, Scott is somewhat of an enigma - he can sing love ballads and is a powerful musical magnet but is determined to never fall in love.  He's the kind of guy who should avoid Emma and who Emma has no intentions of getting involved with.

The scenes between Emma and Scott are powerful, full of emotional angst and smoldering attraction.  While they are both determined to avoid getting involved, they can't avoid each other and their chemistry is very, very powerful.  They can almost literally feel when the other is in the room.  Ms. Hawkes does a wonderful job developing both Emma and Scott, as we get further into the story we learn what has made Emma so determined to lock up her heart and we also learn why Scott goes from woman to woman like they're burned cigarettes.  We watch both of them struggle through decisions they've made in the past and the decisions they can't seem to help making when they're together.

The secondary characters are well written and contribute a lot to this story.  From Emma's mom and dad, who play a big part in why she's locked up her heart, to her cousin Ash and two different young men she dates while trying to be "just friends" with Scott.  We meet Scott's dad, who plays a big part in his life, and all of Scott's fellow band members, who have interesting names like "boner" (and no his name doesn't mean what you think so get your mind out of the gutter....lol).

Will Emma and Scott ever be more than friends and can they have a happy ending?  You'll have to read Rocked Under to find out.  I will tell you this isn't the end of the story for Scott or Emma and the boys from the "Rocked Under" band.  Ms. Hawkes has a powerful voice as an author and this is a series I'm definitely going to follow.

My Rating:  5 out of 5 Crowns And a Recommended Read for Older Young Adults/Adults